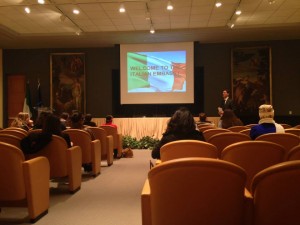 “What Italy has to offer” 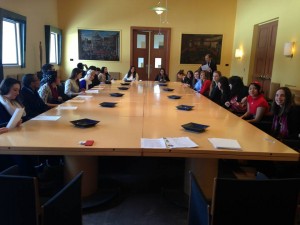 A student is inspired to ask about the influence of Catholicism in Italy by surrounding paintings. 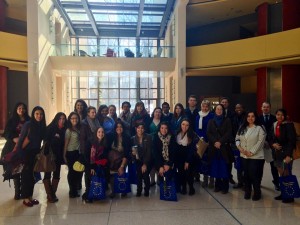 Entrance/End of Tour at the Italian Embassy

“What is going on in Italy?”-A trip to the Embassy of Italy in Washignton DC, USA.

Wednesday, February 19, 2014. At approximately 11:30 am, after passing the security check points, Franco Impala,  the First Secretary of Press & Public Affairs Office at the Embassy of Italy hosted 24 visitors from Marymount University. After being greeted by the speaker, our tour began at the entrance of the Embassy with an answer to one of our very own Western European professor’s question about the surprising modern structure of the building because Italy whom is well known for its exquisite architecture a mix of Renaissance architecture, Neoclassical architecture, Early Christian and Byzantine architecture, Gothic architecture, and so on. The Italian Embassy in the United States was reconstructed in 2000 the design was an representation of the diamond shape capitol of Washington DC.

We were lead to one of the rooms on the left of the entrance which was actually one of the meeting rooms surrounded by what seemed to be a mix of Gothic and Early Christian styled paintings. Which one of our students pointed out to the speakers assistant. An interesting point was made by the speaker which had observed how Americans looked at presidential candidates religious background where as in Italy religion does not questioned neither do their private lives conflict with their political capabilities. When asked about their opinion on the political change going on now in Italy they said the would rather not say.

To collaborate, anyone going to this trip was sent two links to brush up on the countries background and current events involving the government to come up with questions to ask as the intellectually curious students we are. The following links we sent to students:Country’s profile- http://www.bbc.co.uk/news/world-europe-17433142 “Italian president asks Renzi to form government”-http://www.bbc.co.uk/news/world-europe-26222179

With this knowledge in mind the only questions in everyone is thinking is what is going to happen next?

Meanwhile, we engaged in a little trivia which we has suspected would occur before we left campus. We gained more information than we had thought when participating in this activity. However, one of the most shocking things we learned was the original definition of the famous ciao which most think would be (hello! or bye!) actually meant“I am your slave!”

According to the Italian representatives and the information they provided to thousands of people during the European Union Open House in 2013 (Italy in Numbers), Italy is the “1st among western countries troops contributors to UN Missions (1,100+ troops), the us invested $25.3 Billions (8.7% of total FDI in Italy), and 25 Million+ Italian-Americans (according to Italian-American organizations)”.

The Embassy of Italy’s current Ambassador is Claudio Bisogniero. The representatives seemed eager to answer any questions. The speaker definitely did his homework on Marymount and suggested students going to Italy of sites to see and of social interactions in Italy. Both representatives basically gave us a quick course on Italy on all aspects of the culture. They moved us to what seemed to be a press auditorium to watch av 28 minute video on what would consist a tour to Italy just before we left the building.

At the end of the tour what I took from it was the urge to attend future events coordinated by the Italian Embassy and to follow the political changes in Italy.