Posted by Ardeshir Movahed on Friday, March 9, 2018 · Leave a Comment 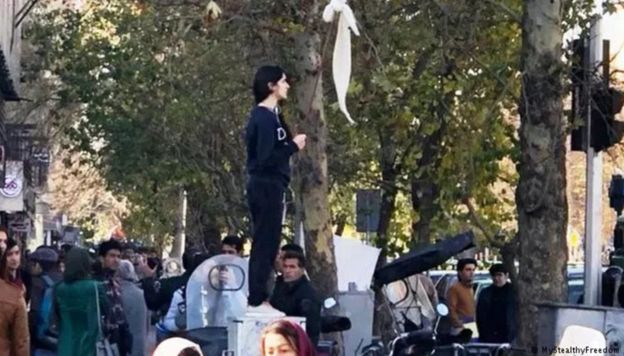 In December of 2017, Iran saw some of the most brutal clashes in months as Iranian citizens continued their protests in opposition of their government. The demonstrations began in Mashad and, with relentless force and speed, eventually spread into other regions. Among those affected were the Iranian cities of Tehran, Isfahan, Rasht, Qom, Sari, Shahrekord, Bandar Abbas, Kerman, Arak, Hamedan, Qazvin, Dorood, Ahvaz, Zanjan, and, finally, Gohardasht of Karaj. Eight people were killed as a result of the protests and 16 perpetrators were put on trial and subsequently imprisoned. 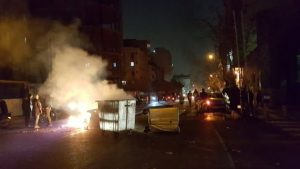 According to an Iranian state news agency, five of the 16 previously mentioned perpetrators were charged with both actively “waging war against God” and begetting “corruption on Earth”, both of which the Iranian criminal justice system define as crimes punishable by death. The remaining 11 defendants, also as reported by an Iranian state news agency, were under indictment for “gathering and conspiring against security, propaganda against the system, and seeking to harm security by inciting unrest and riot”.

In response to the outcry, rioting, and resulting fatalities, Iranian government officials executed an investigation, inquiring with its citizens the social and political issues motivating their revolt and position of opposition. The government’s examination revealed that 31% of Iranian citizens are generally displeased with their government, having lost faith in any potential restoration and equilibrium of the country and its political structure. Further, the Iranian Students Polling Agency (ISPA) reported that, as revealed by a poll conducted by the Center of Student Thoughtfulness in Iran, 69% of respondents are in objection to the economic instability and insecurity, primarily in the context of the labor force. A breakdown of these percentages reveal that the majority of Iranian citizens are contesting corruption, general injustice, and oppression of freedom of speech at 30%, 20.6%, and 9.7% respectively. These numbers speak for themselves in defining the extent to which Iran’s citizens are displeased with the current government and political atmosphere; far more Iranians (75%) are outraged with the current situation than are pleased or indifferent (25%). 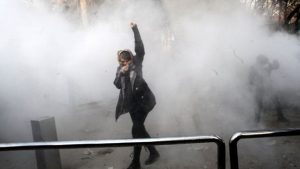 Modern [social] media has made possible the discussion of current international events and political atmospheres as well as the mass circulation of their corresponding mixed-media reports. Whether in the form of digital photos, video, or dialogue between journalists, citizens, and/or the international layman, social platform communication has allowed individuals around the world to visualize and witness first-hand the experience in context. Social media platforms have so far shown Iranian opposition groups addressing their leader, holding him accountable for the national turmoil, as they chant slogans such as “Death to the dictator”, “Death to Khameneiy”, “God bless King Reza’s soul”, “We are Aryans, not Arabs”, and “I sacrificed my soul for Iran”. With that being said, though, access to the above discussed situation in Iran has been limited. Iranian officials have attempted to control international perception of their political and social instability by barring journalists, both foreign and domestic, from attending protests and riots. Such an exercise of control paper writings over journalist retrieval and publishing of events has resulted in the world’s reliance on Iranian citizens’ personal photos, video, and audio documentation. 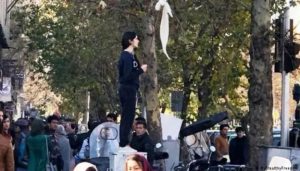 A woman places her Hijab on a wooden stick, an act that has become significantly symbolic of the protests. 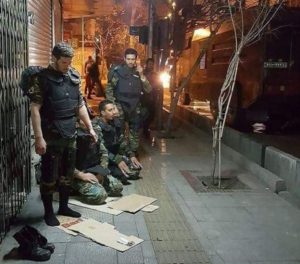 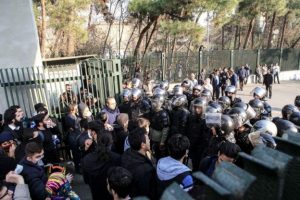 (The presence of security forces in front of the university)