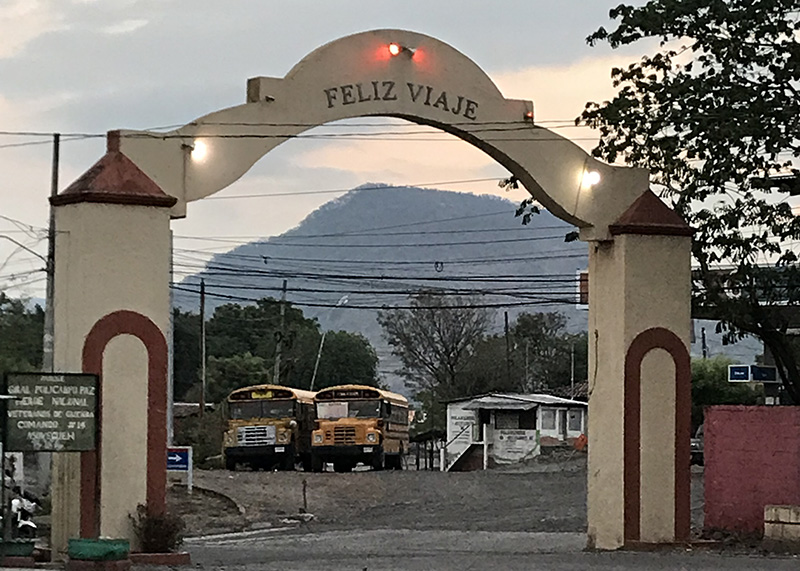 “A cloudy Monday afternoon in Honduras, many things going on in people’s minds during this time of year.” 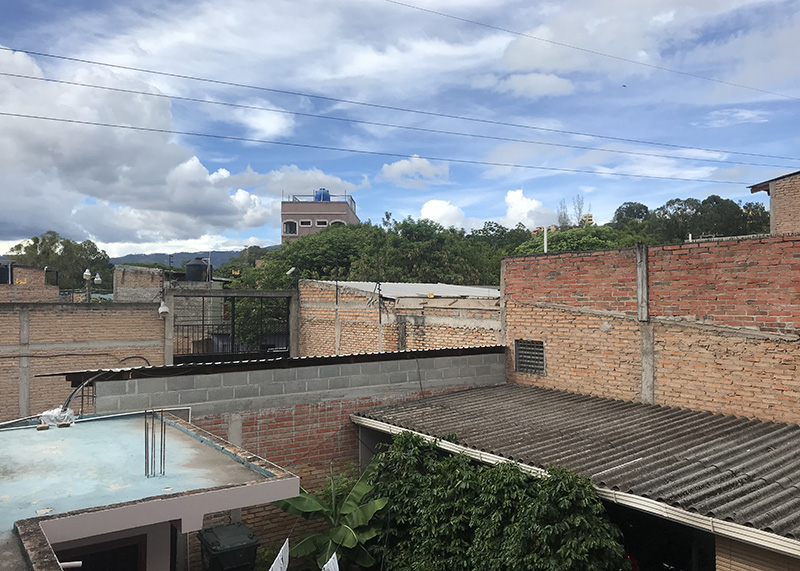 A cloudy Monday afternoon in Honduras, many things going on in people’s minds during this time of year. The rainy season is right around the corner and many people are preparing for all the crops that will grow after the rain. Kids are outside playing soccer and enjoying snacks with their friends. Laughter is all that a person can hear from the kids and the adult reminiscing about the times when they were young. Simple and meaningful memories for everyone in the neighborhood. 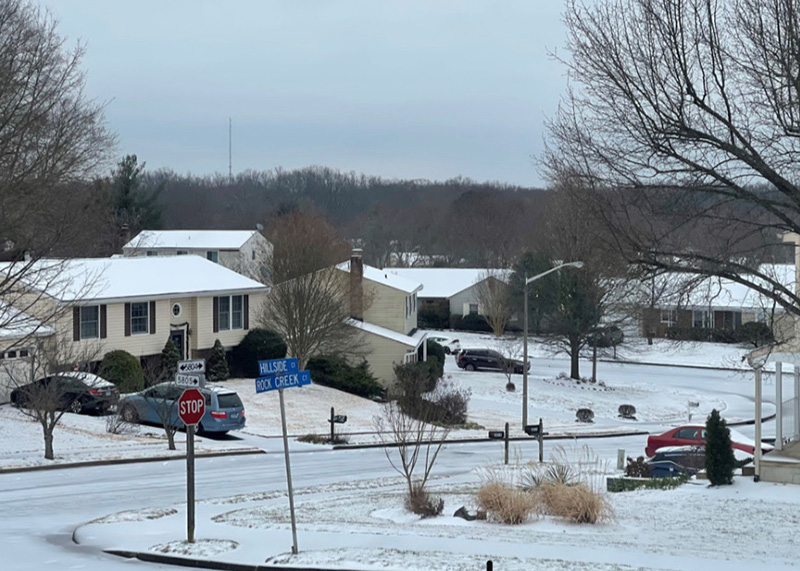 A cloudy, dark, and snowy day in Virginia, everyone is in the comfort of their own home. No one is outside and the only sign of activity is the car tracks on the street. Silence makes the environment peaceful and loving. However, this environment reminds us that there are times in life where things seem cold and dark but there is also the reminder that things will get better. 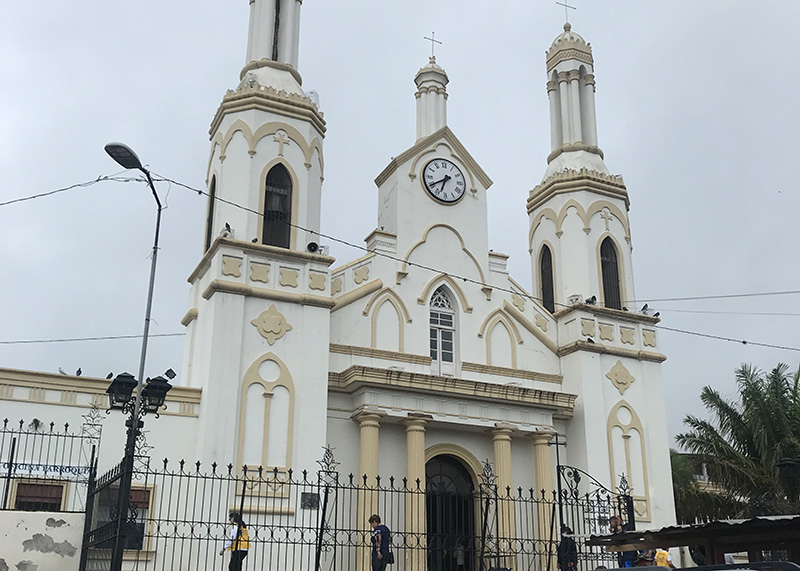 A cloudy Sunday morning in Tegucigalpa, the capital of Honduras. The Sunday Mass is about to begin and citizens from the community are gathering to commemorate the sacrifice of Christ’s sacrifice for humanity. Everyone is greeting one another with peace and love; the bells are ringing loud announcing that the Mass has begun. After the Mass is over everyone heads down to get some breakfast. There are a variety of street vendors providing foods such as Baleadas, Pupusas, Chicharron with Yuca, and other traditional Honduran dishes. Simplicity and happiness are at its most high.

A cold and windy afternoon and people rushing to get home to their families. No one is near the church due to the Covid-19 restrictions. The environment is peaceful but a little daunting, knowing that not many people have visited the church in almost a year now. Seems like something out of a movie, a neighbor said. Frightening that we have to be scared of one another due to a disease, but they all have faith that they will soon be reunited at Church. 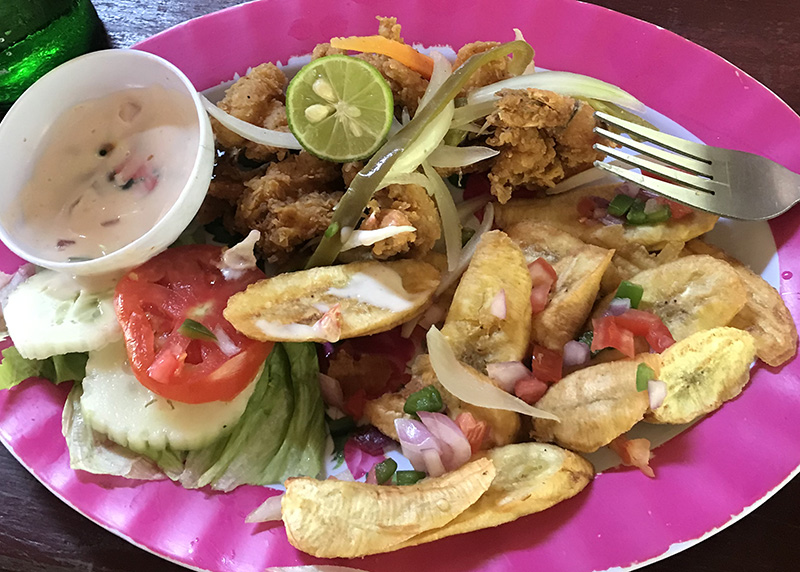 It is 90 degrees outside and many people are gathering at a restaurant in Valle, Alianza Honduras. Los Cocos is one of the finest local restaurants in the village, it has attracted many tourists from around the country and the world to try their tasty food. One of their specialties is their breaded shrimp alongside their friend plantains with tartar sauce. It is perhaps one of the best seafood dishes Honduras has to offer for people who visit its beautiful beaches and villages. 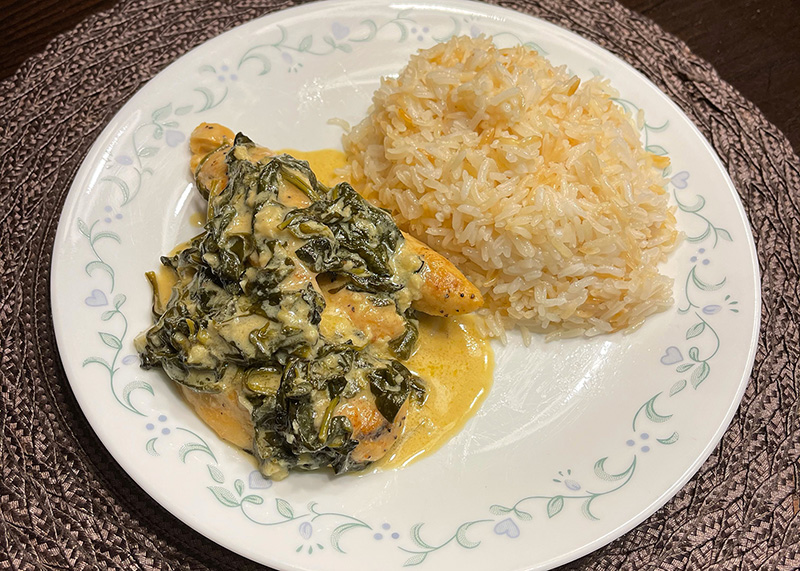 A cold and dark day in Alexandria Virginia and it called for a warm delicious meal, additionally, it was a healthy one. The chicken was juicy, the spinach was soft, and the lemon gave it an incredible smell. Everyone’s gathering around the dinner table to enjoy this delicious French cuisine. 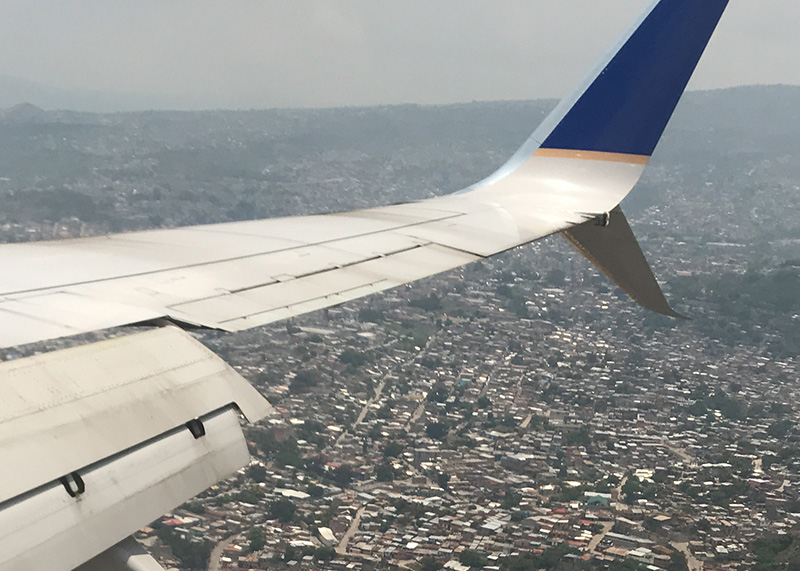 The capital of Honduras is insight from the window, Tegucigalpa. It is a warm and sunny day in the capital and everyone is going forward with their regular routine. Traffic looks intense from above, people are walking all over the place and the houses look impeccable from above. The landscapes are looking wonderful and different since the last time seen in 2016. Nostalgia and memories immerse as the plane descends into the Tegucigalpa.

The night is beautiful and many people are desperate to reach their destination. Lights are looking brighter than ever before, the Pentagon was in sight and traffic was not as bad as people expected it to be. The Potomac River is reflecting the moon’s light making a splendid view for the passengers to enjoy. The plane descended into Reagan National Airport and reality seemed to strike everyone again. 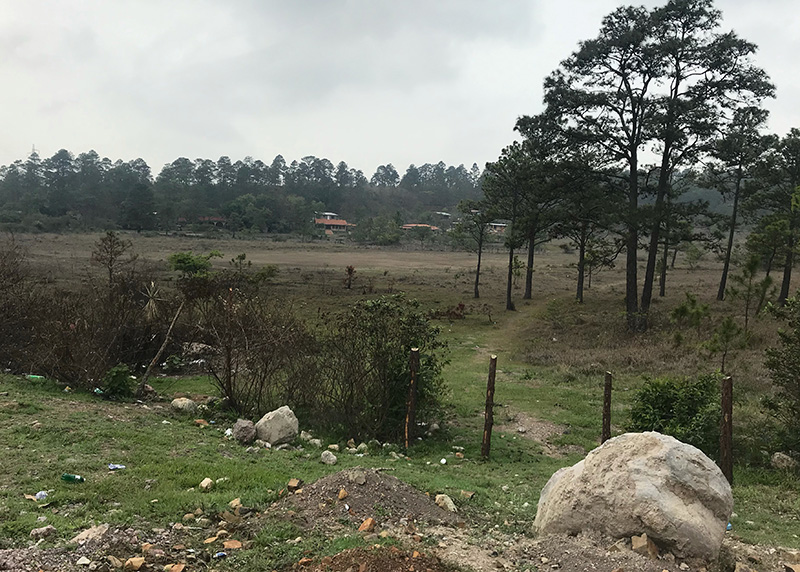 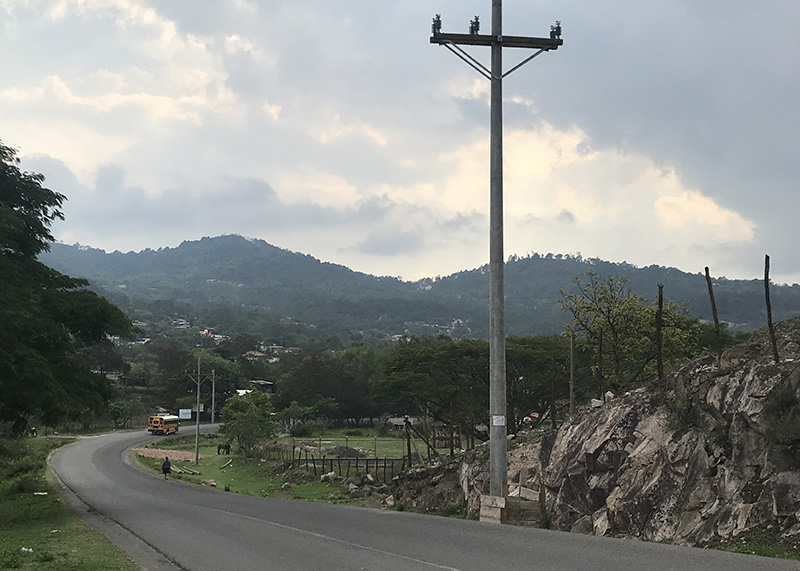 It was a refreshing morning in Zambrano in Tegucigalpa. There was a smell of fresh air since this land was located outside of the city. Cars are driving by and people from the community are doing their everyday jobs. Selling products and moving their animals into their farms. Ojojona was a different story, people were outside enjoying the weather, playing soccer or as they would say in Honduras “Jugando un potra.” The road gives a feeling of mystery and adventure, the weather made it even better as it was windy and the smell of fresh air was incredible. 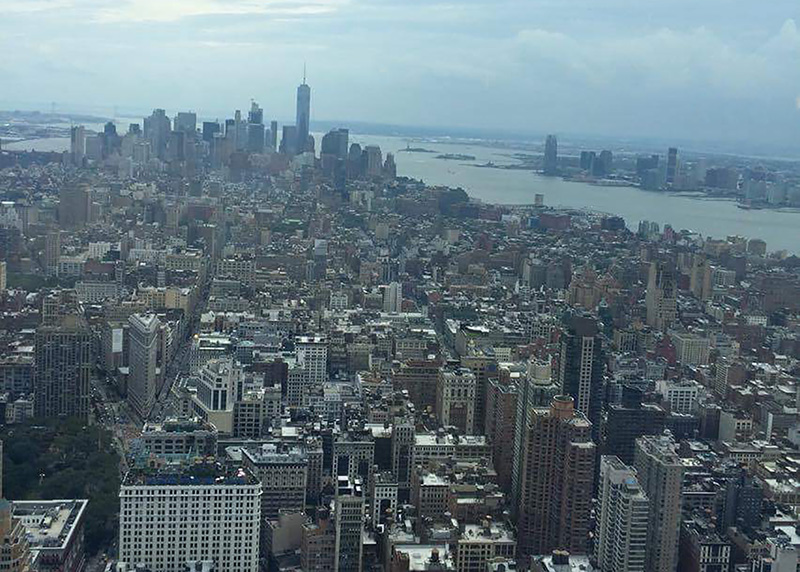 A beautiful view of the Big Apple from the top of the Empire State Building. It is the middle of the day in New York City and everyone is in a rush as usual. The view is astonishing to everyone in the building and the only thing going through people’s minds is how beautiful New York really is. The wind was blowing hard and it brought positive flashbacks. Central Park was the East and many people were enjoying the beautiful day by dancing, skateboarding, and playing football. 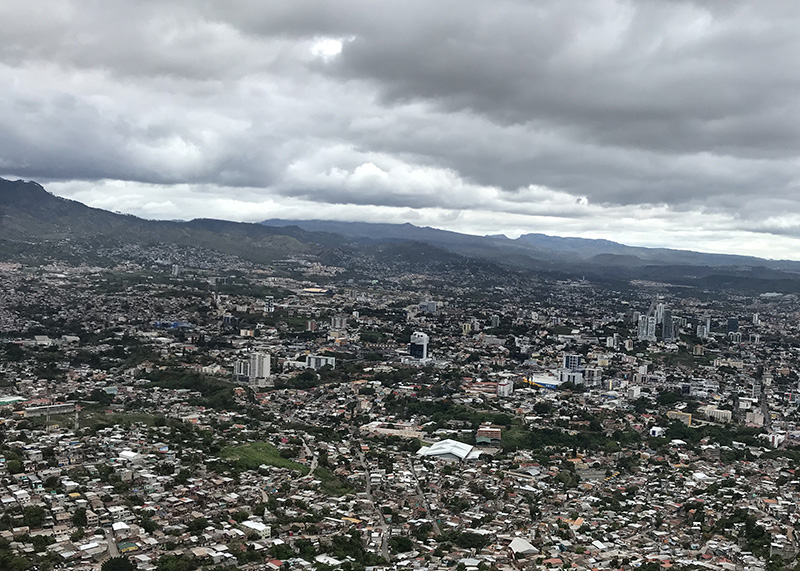 A cloudy day in the capital of Honduras and the top of the city has one of the most astonishing views in the world. The wind is blowing softly, bringing back memories as to when I lived in Honduras. It was my school’s annual Greenday festival at the national park “El Picacho.” Traffic is on the scene and people are coming out of the afternoon Sunday mass in the capital’s national church. Everyone is having a good time with their families, making wonderful memories that will last a lifetime. Lastly, this view only reminds the world that every day is a new opportunity for Honduras to prosper!

Even though these are two different worlds, both of them have been impacted by the Corona virus crisis. Both of them did not handle the situation well, and unfortunately, they had to suffer the consequences. Now the United States is starting to handle the situation better, hospitalizations are going down, but Honduras is still struggling to develop a plan to take better control of the situation, countless doctors have lost their lives due to Covid-19. Every Honduran is demanding that first responders and healthcare providers get vaccinated immediately. They are starting to get them vaccinated but still struggling to handle the situation, however, I do hold the belief that both Honduras and the United States will come out of this stronger than ever!