The Lebanese’s Emotional Reactions to the 2020 Beirut Blast 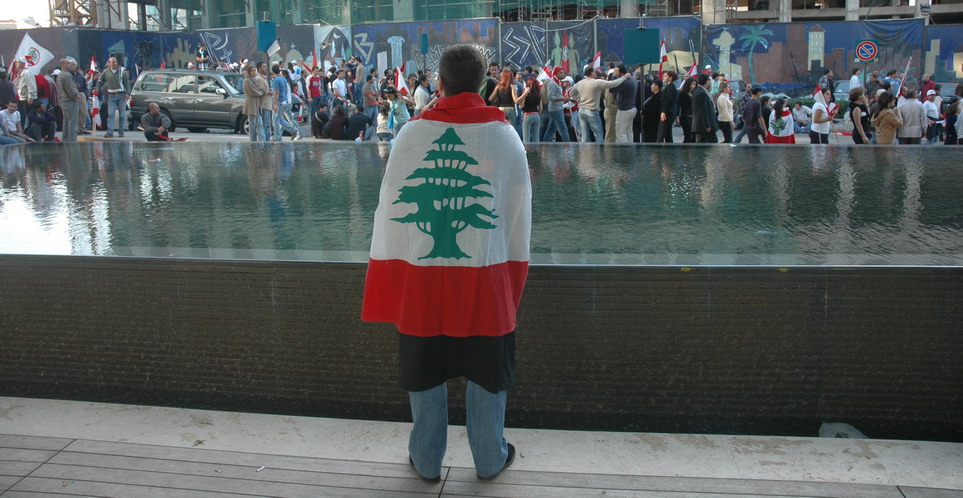 “The beautiful Beirut dressed in white and red and holding the cedar of god, didn’t have a break since the revolution of 17 October 2019.”

The beautiful Beirut dressed in white and red and holding the cedar of god, didn’t have a break since the revolution of 17 October 2019. This revolution was in parallel with a severe economic crisis that lead the Lebanese people to extreme poverty. Lebanon has the third highest public debt to gross product and 25% of unemployment. The revolution was initiated with the decision of posing new taxes on the people, and millions of people fled to the streets to urge the government to take actions or resign. This was followed by the COVID-19 pandemic that lead the country to a complete lock down, and here the economic crisis increased. To come to the most catastrophic event Beirut had ever faced, the port explosion that occurred on August 4, 2020.

This disastrous explosion rocked the capital of Lebanon in the evening of a now dreadfully remembered August 4. Before the explosion, a huge white smoke fire took place in warehouse 12 next to the huge silos of grains. This huge fire was recorded on videos by a huge number of people who were near and far from the port. A team of Beirut firefighters were sent to the location to control the fire. In the meantime, everyone near the port were hearing sounds like fireworks. Recorded videos showed how people were running away when the sound began to increase, and a photo showed 3 firefighters trying to open the door of the warehouse because it was locked and the key was mysteriously not available. This is when the explosion happened causing a huge mushroom like cloud and a blast wave that radiated through the whole country. People far from the port (in other areas) felt as if it was an earthquake and others felt like it was an Israel attack. Seconds after the earth quake a super loud voice of an explosion took place and it was heard throughout the country, and that made people think that the attack was right next to them. At first, everyone thought that it was an attack on Hariri’s residence in Qoraytem due to the severe damage in the building. Around 10 minutes later, everyone heard the heartbreaking news and a huge number were in the field helping. 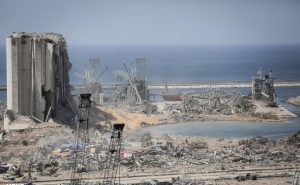 The explosion was huge to a level that Beirut’s port lost a big part of its land next to the grains silos that were severely damaged. The shock wave blew everything in its way: people, buildings, cars, windows, and hospitals, it was heard around 200km all the way to Cyprus and it was equivalent to a magnitude of 3.3 earthquake as seismologists said. This explosion was ranked as the third most damaging after Hiroshima and Nagasaki and the largest explosion of non-nuclear cause in history.

Beirut explosion was due to 2,750 tons of ammonium nitrate that were stored in warehouse 12 with no safety measures and supervision. In 2013, this chemical shipment docked in Beirut from Georgia going to Mozambique, after it faced technical issues. Then the shipment was not allowed to leave the port, so the owners left it behind. A court order was issued for these chemicals to store them in warehouse 12, in the heart of the capital. Ammonium nitrate are stable and safe to store if safety measures were taken. But also if it was kept for a long period of time, this chemical starts to decay, absorb moisture, solidify, and become unstable and can be ignited easily. In 1947, a similar event caused by ammonium nitrate happened in Texas, where 2000 tons of this chemical exploded and led to the death of 581 people.

Almost everyone that was on the port or near the explosion was killed. Even people found in hospitals near the port were severely wounded and several nurses in St. George Hospital were killed. Hospitals were damaged and some are now not operating and nonfunctional. According to BBC, the explosion left 300,000 homeless people, killed 178 and injured 6,500 people, and a minimum of 150 people became disabled, other than leaving behind severely damaged medical supplies and dangerous health infrastructure.

After all, the question remains, who is to blame and who is responsible? After the disaster the people were promised to get an answer after five days, but of course nothing happened. The President of Lebanon, Mic 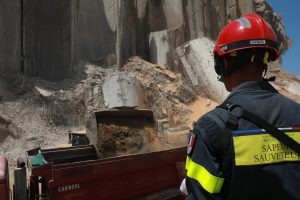 hael Aoun, said to the Lebanese people that this will be a transparent investigation and whoever is involved will be punished. Prime Minister Hassan Diab resigned from the parliament six days after the explosion and refused to be blamed for the disaster. President Aoun asked for support and help to rebuild Beirut at the UN general assembly, by dividing the destroyer area into zones and whatever country want to help can take specific zone. The World Bank estimated around $2 billion for urgent reconstruction, $3.5 billion for economic losses and around $4.5 billion for material losses.

Several TV shows took the investigation to another level and showed the people every bit of evidence related to the explosion. Documents signed by courts and the general manager of the port asking for the removal of those materials, but nothing happened and no one responded. Surprisingly, everyone in the government knew about this timed bomb but no one did a thing to at least remove it from between the buildings and from the heart of the capital. Up until now, the president did not allow for an international investigation in this disaster and assumed that a bomb or a missile could have caused this tragedy.

With many loved ones still missing, hundreds killed, thousands injured and 300,000 homeless, the Lebanese agree that—despite all the tragedies they have faced in Lebanon’s history and that have yet shaped their strength as a people—that blast left them beyond hopeless and in deep despair. Many foreigners died in the explosion.  A Beirut-born French architect, Jean-Marc Bonfire, who was part of the architect group that restore civil war damaged buildings, was recording the explosion live on Facebook and he was severely injured and later died. A German diplomat also died in her apartment due to the explosion. Moreover, a two years old Australian boy, an American citizen, and two Egyptian citizens were reported dead.

Among the countless self-reports of Lebanese citizens expressing their immense grief, a few in particular stood out the most and they didn’t want to mention their last name except for one. Jean Atallah, a husband and a father of two young girls, whose entire house was destroyed, said he had lost “a lifetime’s worth of work,” and added that he “[couldn’t] see [his] family live here anymore.” It is clear he is of many to have given up all hope for a warmer, safer country. Anthony Khioueiry, also a father, lost his son to the blast. It was reported that he had been missing under the rubble for 24 hours before being found. “I’m not angry with the government,” he said. “That’s an understatement. I’m angry with God for bringing them here in the first place. I’m angry with God for keeping them in their seats and taking my son instead.” The Lebanese people’s hostility toward the state only continues to grow. “I’m not sure I feel anything anymore,” said Zahra Akar, a working middle-aged woman. “I wasn’t even scared. I was hoping I’d be done with all this.” Hassan Nabha, a 27 years old engineer was from the 6,000 injured people, but Nabha won’t fully recover from his wounds. He worked at a company in Gemayze and was severely injured from the explosion. “I couldn’t feel my eye or my hands. My face was like dough, full of glass and drenched in blood, but my legs were working so I ran for my life.” This young man saw hundreds of injured and scattered bodies on the streets. He is now half blind and as he said, “scarred for life.” Ali, Nabha’s father, couldn’t reach his son for hours until he knew where to look and during his search among the dead bodies, he hoped that he does not find him. Ali is blaming himself for what happened to his son and said, “When he told me a few years ago that he wanted to move to Canada, I insisted that he stay,” the father regrets the moment that he convinced his son to stay in Lebanon.

The protests Lebanon had known ceased after the Beirut blast, which shows the tremendous loss of heart of the people to rebuild their homeland anew. As repor 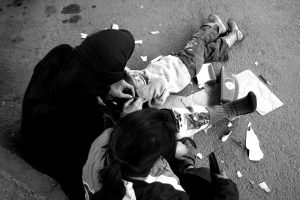 ted several times, a lot think it is finally time to depart the country, for “it will never know peace,” as said by Zahra. Also, today, the Lebanese are enraged. What happened on the 4th of August could have been avoided if it were not for governmental incompetence, which had generated over the past few decades a sequence of crises. This government appears to be merely a contract between multiple sectarian identities, threatening the public health and security on a day-to-day basis with its widespread lack of safety regulations; in lots of homes, office buildings, malls and factories throughout the country, individuals and businesses store and use lethal materials in hazardous conditions to supply private generators with power, since the Lebanese government cannot provide half the power people need.

There are other dysfunctions and safety threats, as denounced by the Lebanese people. The common practice of burning garbage is another source of fires and air pollution, which is in fact, as stated by many, a consequence of the government’s failure to handle a simple municipal service of waste disposal. Rotting food is also found regularly in storage facilities, and horrendous conditions are as well in slaughterhouses; dangerous roads show no sign of speed limits or police presence. Indeed, the Beirut blast was the light shed upon such political corruption and governmental institutions’ countless failures.

Opposed to Hassan Koraytem, the general manager of the Beirut port, who claimed that was not the time to point fingers, the Lebanese people demanded to know who was to blame for years of allowing the nearly three thousand tons of ammonium nitrate to sit on the dock and the reason it was not held in safer conditions. Videos posted on social media showed a small group of demonstrators approaching the convoy of Saad Hariri, the former prime minister, as he was visiting the city on Wednesday, who screamed and cried at the convoy, and fights breaking out between them and security personnel; this is proof of the profound tensions and frustration fueled by years of negligent, corrupt governance.