“On March 14th 2020, the Marymount Baseball team played what would be the last game of the season.”

On March 14th 2020, the Marymount Baseball team played what would be the last game of the season. Just three days prior, the NBA had suspended it’s season after All Star Center Rudy Gobert tested positive for COVID-19. Now on that day, no one had any idea what the future held for Marymount in terms of athletics, or what effects the virus might have on the future of sports for the Saints. Eight months later, athletics still haven’t returned to Marymount, and there is no plan for them to return before the new year. Students are back on campus, and online virtual classes have been going on for the fall semester since August. This seems to be going well, as there has yet to be a COVID-19 outbreak that has forced the students to return home, but it is fair to say the learning experience is less than ideal with the compromises that had to be made to protect students and staff. When sports return at Marymount, it is safe to assume that the same level of caution will be taken, especially because there will be people from other schools coming in close contact with the athletes. The questions now are when will sports pick up again at Marymount, and how has this situation affected the players and coaches. 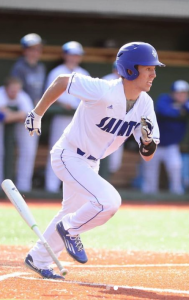 Obviously, sports aren’t the priority at Marymount, but they will return at some point, and it is important to learn exactly when and how the Saints will get back to competing. When asked about when athletics might return, the Sports Information Director Josh LaVeck said, “My hope is that we stay to the plan, [where] fall was postponed to the spring, and winter has now been postponed until after the new year, so we are still not entirely sure what that’s going to look like. The conference and the NCAA don’t really have that direction yet, but my hope is that we will stay on track, the track that we’ve been on and well be back in action in the spring, but again, nothing is guaranteed right now and things change so we don’t have any concrete decisions, but that’s the plan and that’s what we’re all working towards is to try and make that happen.” When asked specifically about anything particular, he replied, “There’s been no definitive decision for an exact schedule but our plan is postpone until the spring and we’re doing everything we can to stick to that.” One important thing to know is how things might be different when sports do come back, there was a clear emphasis on safety, with LaVeck saying “I think a big part of navigating this successfully is being socially distant, wearing masks, following the protocols that the university and the CDC and everybody sets…” and “As far as what I will be doing with game operations we’re going to have to find a way to stat socially distant and find a way to operate socially distant, it’s a conversation that we’ve been having since the summer to try and figure out how to make that happen and it’s probably not a super difficult thing to make happen, it’s just a matter of having a plan, getting ahead of things, making sure that we aren’t trying to make these decisions the day before a game, and make sure we are taking care of our teams and our coaching staff and our administrative staff by making sure everyone is following the right guidelines that are in place right now.”

For the athletes, COVID-19 has meant a drastic change in the way teams prepare for a season. When asked about how tough it is to have such a long gap between seasons, Lauren Cunningham, a sophomore women’s basketball player, said, “I think it’s difficult to continue to be motivated… and also trying to consistently stay in shape while not being able to get into the gym the way we used to.” She also mentioned the fact that the team wasn’t really together until recently with practices starting. Despite this, she also said, “coach sent us a workout plan until we came back to school, with workouts every other day, and once we got back to school we had two weeks off and then started in two groups doing basketball workouts in the gym with no coach.” On top of that the team was doing strength and conditioning together on top of individual workouts. Despite the team doing their best to stay physically fit, the team “can’t play pickup, [which is a] nice way to get to know the freshman, and also just play basketball.” When asked specifically about what the freshman might miss out on, Cunningham said, “In the beginning of the season, we would have scrimmages, and we’re obviously not going to have those so I think they are going to miss out on that [which] helps learn the coache’s style of play, the shot clock, and also the overall experience of traveling to teams outside your conference.” Finally, when asked whether this extended offseason would help or hinder the team, Lauren said “it was good for our bodies to rest after our long season, and now that we can have practice… we’re going to get back into conditioning, but also we’re going home for a month, and it’s going to be the dead winter so I don’t know how people are going to work out because you can’t really go to a gym, but it will definitely play a factor coming back if we play because you’re not getting the same experience in the games before your conference… I think our chemistry on the team will be affected.” Despite the fact that every team will be dealing with the same conditions, the Saints have 7 incoming freshmen to integrate to a team that won the Conference championship last year, and made a deep run in the NCAA tournament and will be looking to replicate that same level of success this year. 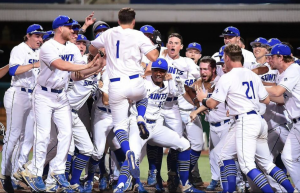 Finally, when speaking to Jamie Reynolds, the Director of Athletics and Recreation at Marymount, she said that the priority since things shut down was “learning as much as we could about COVID and what that meant, and how we could safely engage the student athletes.” She also has a background in public health, having a master’s degree in the subject, and has “never been so grateful for that background.” When asked about the plan for sports returning, she said that “we’re in conversations with our conference, working on our conference competition schedules for all of our sports.” Also mentioned was the importance of testing in a safe return. Reynolds said, “A lot of it will have to do with testing. One of the biggest components of the NCAA Guidelines for competition is being able to test.” When asked about the potential shortening of seasons, she said “I don’t know [if] any sport will have the length of season that they’ve had in the past, but it’s hard to say exactly what length every sport would have. A lot of that depends on the decisions within the conference, and also there are different variables within the NCAA guidelines as well.”

From this it is obvious that everyone around sports wants it to come back, but they want to make sure that they are doing it in the safest way possible, as to not endanger the athletes and workers, not only at Marymount but across the conference. Other colleges, who have more of a history of college sports, like Ohio State, are returning for football season, despite the obvious danger to the students’ health along with the coaches and families of the players. The argument used is that the loss of revenue could mean the loss of other programs at the school, and fortunately, Marymount is not so reliable on their athletes to pay for things on campus. They also don’t have a large number of fans across the country, mainly just students, families, and alumni are the ones who come to games or watch the broadcasts online. All of these factors, that have led to other major schools rushing back to sports at the detriment of health and safety, don’t apply to Marymount, leading to a more clear headed approach on how to get the players back on the field/court. Obviously there is a lot of time between now and the spring, where it is expected sports will make their coveted return, and things could change in an instant. For example, a vaccine could come out for COVID-19, meaning it will be safe to resume play without any need for restrictions. On the other hand, a sudden spike in cases could mean the season is too risky to attempt to make happen, and an entire year of a student-athlete’s career could be gone to something no one had control over. Either way, Marymount, along with the conference, are doing everything they can, and monitoring the situation of everything they can’t, to make sure that this crisis is handled properly on their end.