Marymount Men’s Basketball and the challenges with COVID-19

“…sports would have their seasons postponed until spring 2021, but that isn’t stopping Marymount men’s basketball team from getting better and preparing for the season...” 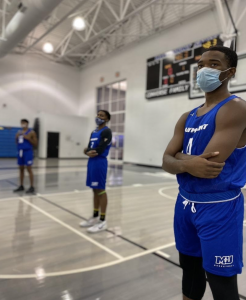 Recently, the NCAA announced that all Division III (DIII) sports would have their seasons postponed until spring 2021, but that isn’t stopping Marymount men’s basketball team from getting better and preparing for the season just like many other DIII college programs this year. All over the country, college athletes are being affected by coronavirus.  For many universities there will be no season, although some Division I programs are continuing with plans of reopening, as well as introducing program cuts for this upcoming year. The NCAA plans for reopening some D1 sports has led smaller programs (DII & DIII) to wonder what will be the case for their season. Recent news from Marymount’s conference, the Atlantic East Conference (AEC), came out regarding the postponement of conference play indefinitely for all sports participating in the winter. This is an all new experience for college coaches and players, but it hasn’t changed the Saints aspirations of winning a championship.

Last year, the NCAA DIII men’s basketball tournament came to a halt in the final four, as a result of the on-going Covid-19 pandemic. All following spring sports were canceled for the remainder of the year, causing chaos among college seniors expecting to compete in the spring. This forced the NCAA to make a decision in order to address the confusion the pandemic caused for spring athletes. In response the NCAA would grant spring sports an extra year of eligibility as well as more flexibility when it comes to the student-athletes. So what does this mean for DIII athletics this fall and upcoming spring semester?

On Tuesday, September 15th, the NCAA announced that it would follow through with a proposal that would cap championship brackets for winter and spring sports to 75 percent. This means that field sizes would have to be reduced down to 75 percent of their usual size. The NCAA’s recommendation will be making its way through the DIII administration, receiving feedback from the different winter and spring sport committees, in order for management and the president’s council to come to a consensus in October. The idea is that in return this can cut costs that would have been transferred to other participating schools. Recommendations made by the NCAA COVID-19 Medical Advisory group, suggest that “all tournament sites would be predetermined in an effort to safely host winter championships participants,” according to Greg Johnson. This would include regular tests for all staff and players, as well as having an abundance of sanitation supplies in order to follow protocol requirements. An estimate was made for roughly $9 million in additional costs, which is why the NCAA made the recommendation. 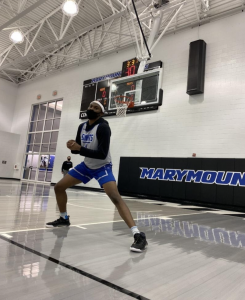 With the DIII pre-season already starting at Marymount, the men’s basketball team is already in the weightroom and on the court working. Senior forward, Bryce Gonsalves, talks about the biggest changes he’s gone through since the COVID-19 pandemic. He says, “it’s the experience of it all, that most of its online, and that last year obviously everyone was together and stuff like that, and then for basketball, it’s more about being safe more than ever right now, and we just have to make sure were social distancing, especially with all the new rules.” Marymount is taking a phased approach to getting their athletes back into a consistent schedule, as well as keeping them safe and healthy. “For strength and conditioning we have to go into pods, along with different phases to progress through, if one person was to get coronavirus, or have reasoning to take a test, we would be shut down for a set number of days,” said Gonsalves.

The three phases that the team is taking are to ensure it is a safe transition to the normal season, if the NCAA goes forth with competition this year. “These are Marymount rules, but the NCAA has postponed the season of course so we don’t really know what is going to happen,” said Gonsalves. With the talk of returning fall and winter sports participating in the spring, some of the players are unsure about testing. “Basketball would have to be a sport that is constantly testing players, every two or three days each week,” said Gonsalves. He also mentions that the AEC is discussing ways in which the situation would be handled if a team were to test positive in their conference. If the men’s team were to experience a possible positive case, the team would have to self-quarantine for two weeks, and start the phases all over, potentially forfeiting any upcoming games. “I am grateful and happy to be back on the court and playing with my friends again,” said Gonsalves, regarding his excitement about being back at school.

For a senior, the responsibilities and expectations are high, with an uncertain decision for the season ahead, the freshman are eager and excited to get out on the court. “They’re definitely hungry to get on the court and play, but aren’t the biggest fans of having to practice without having a promised season,” said Gonsalves. The change from high school to college is a challenge for many freshmen, especially with the addition of sports and Covid-19 regulations on top of online classes.

This is not the case for freshman guard, Marcus Beckett. “I think it’s a lot easier now to balance my schedule than before actually because I don’t have to worry about going to and from class, especially with living on campus, I can just finish my class and walk straight to the gym after,” said Beckett. The ease of access to the gym and weight room has been a key role in keeping many of the players busy and healthy during the semester while waiting for the start up of basketball. But with the uncertainty of  the upcoming college season, staying focused and motivated has been Beckett’s choice of action. He says, “ I think getting in the gym is exciting enough, I think we all enjoy it a lot and coach has been here throughout it anyways, so it hasn’t really felt like the seasons haven’t started, it feels pretty normal but I also don’t know what last year was like.”

During the Covid-19 pandemic, measures have been put into place to keep the players safe and healthy, but what does this mean for the coaching staff? Throughout the course of the pandemic, rules and guidelines have bombarded coaches and staff on what has to change and when. Head Coach Chris Rogers is in charge of the men’s basketball team, and has been taking action to keep his players healthy and also motivated as a result of the postponed season. Major changes including recruiting, affect the way Rogers is spending his time looking for future saints. Rogers said, “we’re completely at the mercy of the livestream, and internet connection, as well as the quality of the livestream.” With everything being heavily pushed to online, many college coaches have to rely on recording equipment to make judgments on players they like. “I have logged onto games that have been on the baseline on the floor and you can’t even tell what is going on, or the camera is mounted on the wall behind the backboard so you can only see one end,” said Rogers. With all the implementation of Covid -19 guidelines, it’s also made visits hard for coaches and recruits as well. Not only just getting the recruit cleared and on campus, but then worrying about what they do while on campus, is much different than the past. 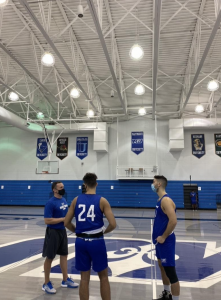 Rogers believes this season he has a chance to get back to the championship, and is showing high praise for his hard working players. “I think everyone is excited because last season we lost a big number of seniors who played a lot, but we still have Steve and Xavier coming in as first and second-team players, and most of our leagues first and second team nominations graduated,” said Rogers. With the Saints being made up of mostly juniors and underclassmen, the opportunity is endless for his players. “It seems like they are going after that opportunity and trying to get better in some cases,” said Rogers. With the addition of six new freshmen, Rogers believes that the players are excited, especially with this being their first time on the college scene, “I think the new guys are still just as excited because it’s college basketball, they don’t know what to expect, and can’t wait to get started. It’s a totally new thing to them,” said Rogers. Now going into his 12th year as head coach for the saints, Rogers is looking forward to this upcoming season for his players, with aspirations of getting back to the championship. It will be important for the players this year to stay healthy and focused in order to achieve the teams goals, and learn from this ongoing Pandemic.