The Liberal Arts Education: Its Roots and How it has Grown 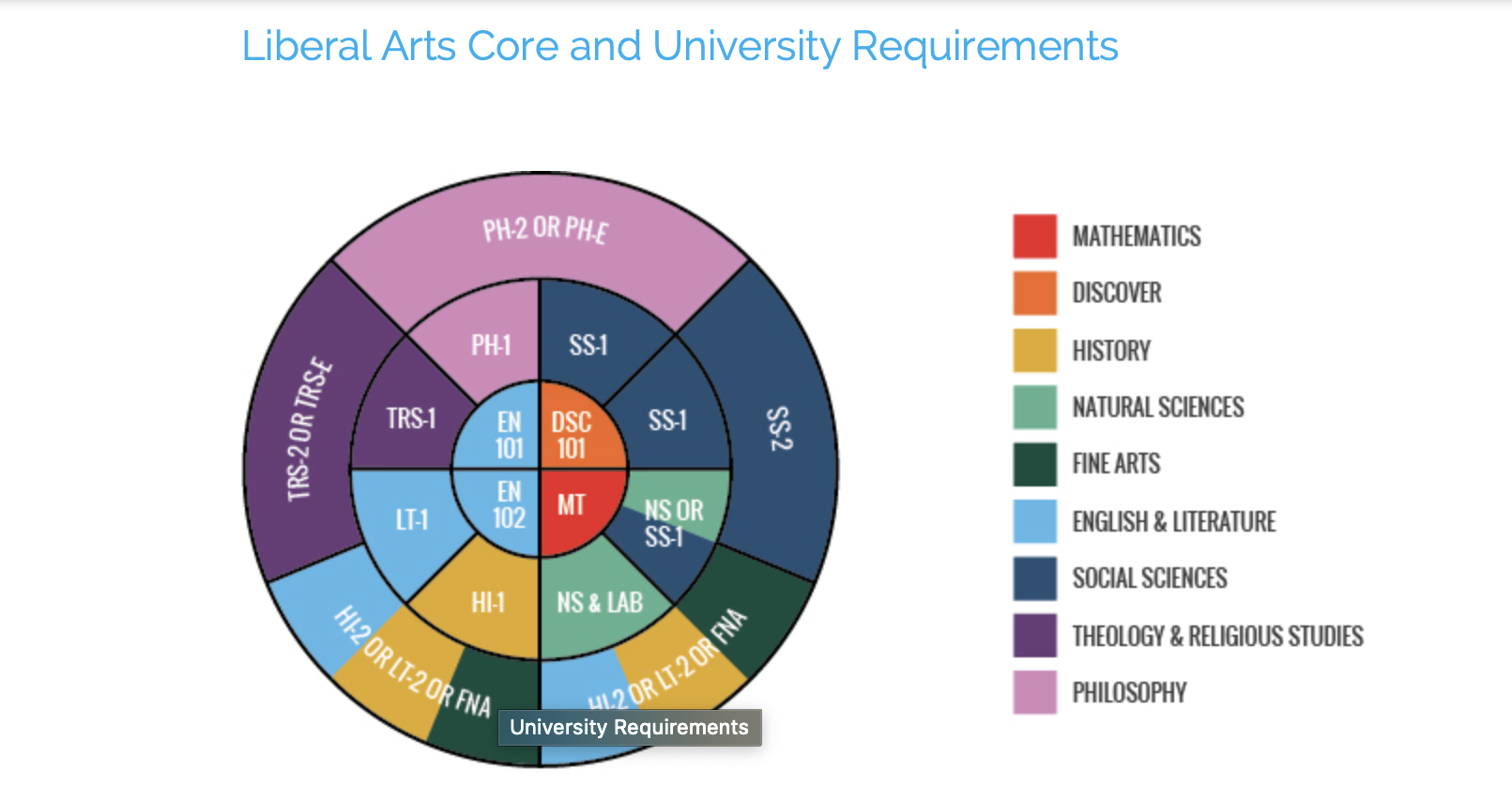 The liberal arts core is a widely used academic structure that aims at producing well-rounded individuals from higher education systems.  Its tradition is centuries old and spans back to some of the most prolific thinkers in human history.  However, as thought and academia have evolved over time, the liberal arts education has as well, and students from colleges who utilize the core have their own opinions on the liberal arts curriculum at their respective institutions of higher learning.

The world has far evolved from ancient times in terms of technology, politics, medicine, and culture.  Different nations around the world are incredibly diverse culturally, but still one thing remains similar– the importance of academia and knowledge.  For the last few centuries, since the time of the ancient Greeks, the concept of learning for the sake of becoming a civilized person has been a part of every great civilization.  This culture of academia that was specifically started by the Greeks was called the liberal arts, and encompassed the academic trivium: grammar, rhetoric, and logic.

Over time, the liberal arts have expanded to include more areas of academia, like all the major Humanities (art, literature, history, philosophy, etc.), social sciences (psychology, law, sociology, politics, gender studies, etc.), natural sciences (anatomy, biology, physics, astronomy, etc.), and the formal sciences (math, statistics, etc.).  The modern liberal arts core, which has been adopted by many institutions of higher learning all over the world, requires students to take courses in several if not all of these areas.  Because of its lengthy tradition and the centuries over which it has had time to evolve, the liberal arts education both continues to entice and mystify students.

As previously mentioned, the liberal arts were originally established as the trivium by the Greeks.  These three areas of study were considered essential to study in order to be a free individual active in civil life.  During that time of Greek influence, educated people needed to learn these arts in order to participate in society and be an involved citizen.  According to both the Greeks, and later the Romans, having studied the liberal arts was the key to be a free man.  Eventually, during the middle ages in primarily Europe, the liberal arts extended to include the quadrivium.  The quadrivium included studies in arithmetic, geometry, music, and even astronomy.  These areas of academia, again, were required to be studied if any man wanted to be free and active in politics.

Though educated people of antiquity who studied the liberal arts were mainly men, modern education has obviously been opened to all genders.  Liberal arts college student Harper Payne says, “I see the modern use of liberal arts as taking a classic approach to education, less standardized for testing and more focused on you growing as an individual… as well as growing your scope of influences through personal interactions and different forms of art.”  The elements of the modern education that Payne describes are closely tied to what the founders of the liberal arts described– disciplines that are meant to broaden the mind and engage an individual in something that widens their horizons.

Because of the specialization of the liberal arts and their emphasis on a well-rounded academic experience, students who chose to pursue education at schools with a liberal arts curriculum should heavily weigh their decision.  Liberal arts “scores”, or required classes that every student at a liberal arts college must take, take extra time and dedication in order to complete.  However, the education that students get from such an experience can help them adapt and face issues later, due to the range of disciplines they were introduced to.  When asked about the usefulness of the liberal arts education in her experience, former Marymount University communications student Juanita Guzman said, “I think it depends on the major and what direction a person wants to go with their career.  For example, if someone wants to try law school after obtaining their bachelors, being required to take philosophy courses might be a good match…. or if a communication major wants to work in advertising, some knowledge of psychology might be helpful.  However, some courses to me weren’t as helpful, like theology for example.”

The opinion of Guzman seems to be echoed by other college students– the idea of a well-rounded education is a great idea.  If someone feels their specific career path does not seem as “helpful,” it may make more sense for a student to be able to opt out of a certain class, or tailor the specific liberal arts curriculum to more fit what they want to do.  Other students, like Marymount University english and philosophy major Amanda Cordon-Campa, said, “The main reason why I think taking a philosophy course, in any curriculum, is important because it is one of those subjects that really opened my eyes to problems that happen on a daily basis.”  She liked the idea of taking courses that do not necessarily have anything to do with her majors.  Cordon-Campa continued, “I definitely think that taking a philosophy course for any type of program, even before I changed my major to philosophy, is necessary because it really opened my eyes to so many problems and debates people have in terms of ethics, the environment, and other things we should all be worried about.”

The Liberal Arts College Review, an organization meant to bring awareness and understanding to this unique learning experience, says that liberal arts institutions are constantly striving to seek out students that will thrive in rigorous academic environments.  These institutions purposefully keep class sizes small to maintain the feeling of learning intimate and special.  Payne expressed her love for these smaller classes at her liberal arts school, Huntingdon College.  Payne said, “I like small class sizes, which I associate with a liberal arts education, and I also appreciate being encouraged to take my own path when approaching different subject matter.”  This smaller class setting that Payne says she values is a big part of the culture of liberal arts institutions, specifically the fact that this class configuration allows students to get to know their professors better, and to foster long-lasting friendships with peers.

At Marymount University in Arlington, Virgina (the school Guzman attended and Cordon-Campa currently attends) the liberal arts core has been at the heart of their educational experience for decades.  Marymount says their mission is to help individuals become enlightened and well-rounded individuals.  The goals of their curriculum are to have students take classes in different subject areas, thus forcing them to develop specific skills outside of their majors and specializations.  Despite Guzman’s ideas about some courses being a bit unnecessary for certain majors, she remarked “When I went to [Marymount University], I had the option of taking classes like philosophy and sociology. Those classes I wouldn’t have ever thought of taking if they weren’t required. However, they opened my eyes to information that I felt benefitted my knowledge in my major when applying certain concepts to my papers or other work.”

Marymount’s liberal arts core requires students to take classes in many different fields, many of which were part of the original liberal studies’ trivium and quadrivium.  There are twelve humanities credits, which are history, literature, and fine arts classes.  Next are three math credits in a mathematical field that suits the skills of an individual.  After that, students must also complete four natural science credits, which typically involves the lecture class and then an associated lab credit.  Next, students need 12 credits of social science courses, which could be in anything from politics to sociology.  Finally, students also need 12 credits of philosophy, theology, and/or religious studies to finish off the basics of the liberal arts core.  Freshman or transfer students are also required to take a “First Year seminar” to cultivate the skills college students need; every student must also take two writing-intensive english courses, typically an introductory class and then a composition class.

While the United States seems to dominate the liberal arts world currently with hundreds of institutions following the ancient academic tradition, other countries and cultures are starting to embrace it as well.  In Europe, many larger countries like the UK, Germany, France, Spain, Belgium, and the Netherlands have at least one liberal arts school for students to attend.  In Asia, there is a network of liberal arts institutions that was established in November of 2017 called the Alliance of Liberal Arts Universities (AALAU).  Therefore, even though the United States has primarily kept the tenets of the liberal arts curriculum alive, other academic cultures are beginning to see the merit of adopting these ancient philosophical and pedagogical methods.

While it seems as though there are divided opinions among students today about the usefulness of their liberal arts education, there is no denying that the core has merit.  “To me, liberal arts means studying things such as literature, films, arts, etc.,” Cordon-Campa stated, “It means a break from the traditional math and science subjects that most of us have experienced.”  The liberal arts core has its place in academia, or it would not be used by so many prestigious institutions— Amherst, Bowdoin, Swarthmore, Wesleyan, and Williams are all universities with long-standing academic traditions steeped in the liberal arts.  It may not be the easiest path for young academics to take, but it is an ancient one with roots that go back to the brightest thinkers in history– and that is worth the intellectual adventure alone.