Living life to the fullest: How the RSHM live within Marymount 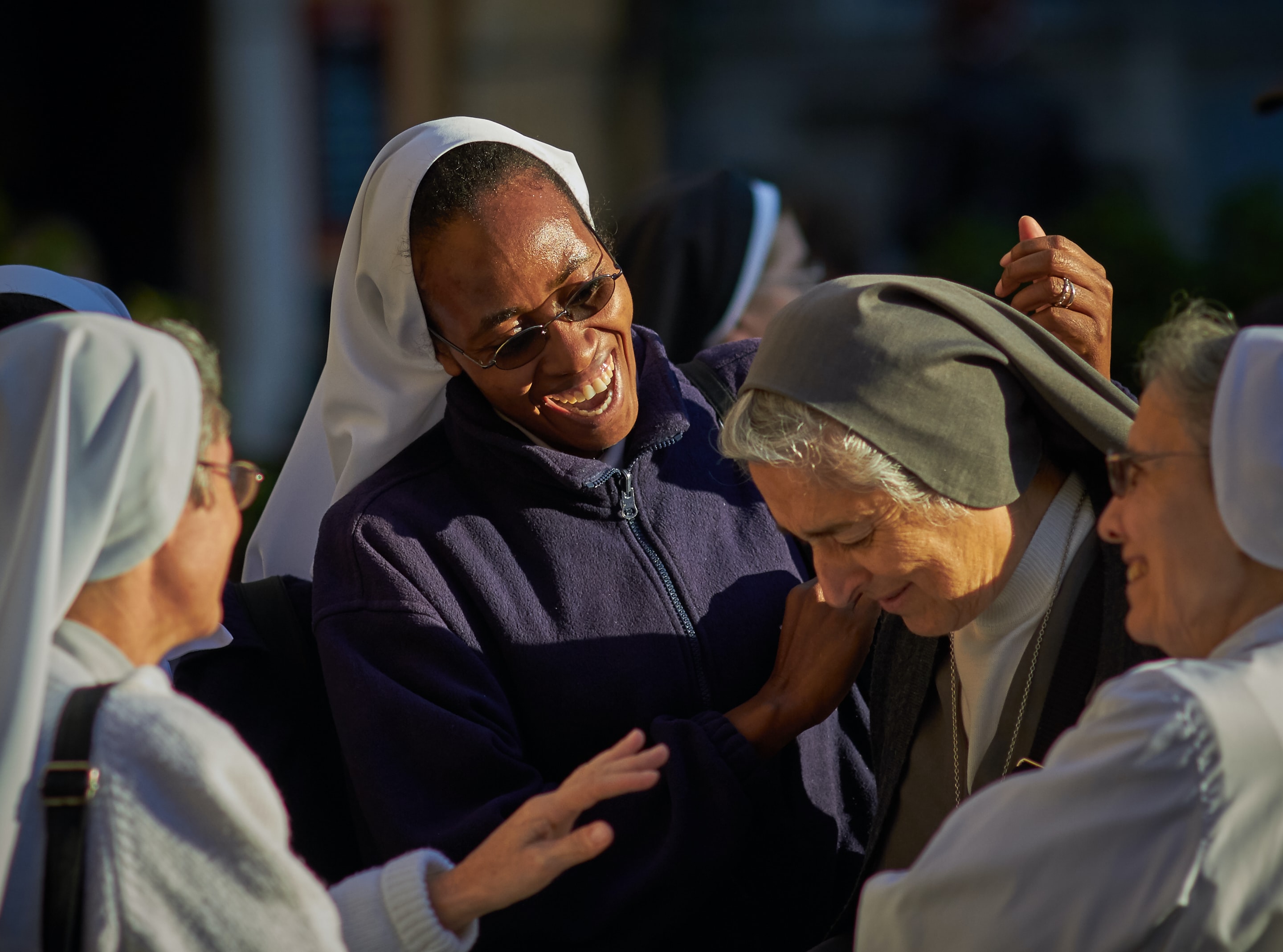 Curiosity. Service. Perspective. That all may have life and live it to the fullest. Three words, one phrase. Marymount University prides itself on these traditions that have been established since the school was first founded by the Religious of the Sacred Heart of Mary (RSHM). The traditions of “intellectual curiosity, service to others, and a global perspective” are what drives the mission of the school in order to help students learn and become an integral part of their community.

The Religious of the Sacred Heart of Mary began as an international congregation of Catholic women. The overall mission of the Religious Sacred Heart of Mary since their formation in 1849 is “to know and love God, to make God known and loved, to proclaim that Jesus Christ has come that all may have life.”  This order came to then found Marymount as a high school to help poor women in need of an education despite their situation.

However, Father Rampino said that caring for the poor is not limited to those who are materially poor, but it can also include those who are poor in spirit, emotion, or even mental health. Not only has the mission of the Religious of the Sacred Heart of Mary been vital to the traditions and mission of Marymount, but its impact can also be seen through various clubs and even the athletics program at the school.

Saints Serve, done every Saturday, promotes students to volunteer their time in order to help those who need food, shelter, or even something as simple as company. For instance, on the weekend of February 15th, students created cards and valentines for seniors at a local senior home. This upcoming Saturday, February 22nd, students will be creating stuffed bears for children on military personnel. Saints Serve reinforces the tradition of service of the Religious of the Sacred Heart of Mary by actively serving and going out and doing community service for those who are in need. Not only is Saints Serve a way for students to do work and engage with the RSHM traditions, but various other programs such as the Honors program and athletics, apply service to the community and those in need.

“If students enter the program right out of high school, they take Honors 101: The Quest, and the topic that I’ve taught for the past three years is on food, food ethics, and society,” said Dr. Stacy Lopresti-Goodman, the director of Marymount’s Honors Program. “And I have a lesson on the RSHM in the first or second week.” In her class, she asks her students to make connections between the mission of RSHM and connect them to their assigned readings or even look into farming methods and connect them to their everyday life. Lopresti-Goodman mentions that she attempts to have a formal lesson with her honors students in order for them to understand the mission of the Religious of the Sacred Heart of Mary, but she also requires students in the class to participate in community service and then write reflection pieces on “how it directly ties back to the RSHM mission.”While this is one of the few classes that require service in relation to the RSHM, Lopresti-Goodman also said that she is working in conjunction with Dr. Susan Agolini in order to create more service-oriented class available for students.

However, students in the Honors program still have the chance to participate in service oriented projects within the program itself. Past service projects have included working in the St. Andrews Garden, making bagged lunches for the homeless, making reusable female projects for women in third world countries, and even fundraising to send a student in Belize to high school.  “The spirit [of the RSHM] is reflected in the service projects we do, and those are student lead initiatives and we have a service coordinator (a position to which a student is elected) and it is their responsibility to design service events for the honors students,” said Lopresti-Goodman. Not only is service promoted, but since it is an academic program, intellectual curiosity also challenges students through rigorous honors sections of classes and written tutorial projects of their choosing. By their senior year, the students must successfully defend their tutorial thesis.

The global perspective of the mission is reflected through a study abroad opportunity exclusive to Honors students. Students get the opportunity to study abroad in Oxford, take six credits, complete a tutorial, and explore London. While the Honors program is more based around the mission of the RSHM, the athletics department also participates in service for the community. “Community service has affected me as an athlete by making me feel more part of the community,” said freshman soccer player Laney Placido. According to Placido, being part of various service acts with her team has helped her feel as though she is “taking action in the community and it helps you get more involved because you are interacting with the community.” However, the athletic department’s promotion is not explicitly connected with the mission of the RSHM. “I think that the athletics department could do better as a whole because we think of ourselves as a separate department from clubs and other organizations when in reality we are all interconnected,” said Placido.

Despite this, teams such as Women’s Soccer and Women’s Lacrosse go out and participate in community service and unknowingly take part in the service aspect of the Marymount tradition. While there are clubs at Marymount that are service oriented, there is not a lot of emphasis or knowledge of the Religious of the Sacred Heart of Mary.

While it is briefly touched on during freshman orientation and over the course of Founders’ Day, there is no event or emphasis on the RSHM in classes or events that promote teaching students about history of the order that founded this university.  “Some students think that it [the RSHM] is emphasized, while others don’t. It’s a matter of how well do people know the order and how well do people know the history of Marymount,” said Father Rampino.

Lopresti-Goodman also said that while she does what she can to teach the Honors students about the RSHM, she is not aware of what other classes are doing to inform students about the order of the Religious of the Sacred Heart of Mary.  Whether or not the students are explicitly informed about the history or the mission of the Religious of the Sacred Heart of Mary, Father Rampino said that these traditions should apply to all because they are “good universal principles.”  “I think that it is important for the students to understand the history that underlies everything that we do and drives our mission as an institution,” said Lopresti-Goodman. Not only that but faculty also have some opportunities to learn about the RSHM. Faculty are able to participate in a workshop led by their colleague, Dr. Brian Doyle, in which they read and come together to talk and learn about the RSHM.

“It helped me understand more about our Catholic identity and gave me a better understanding of our institution and what drives our decisions and our history,” said Lopresti-Goodman. “It also made me more intentional with how I incorporated service [to the program] because I already value service and I know how important it is.”

According to Lopresti-Goodman, she sees that the service aspect of her curriculum has affected her students in a positive way. “Some students go back repeatedly over the semester and say ‘I loved it and it was so enjoyable and I’m so happy to help others,’ so I see that spirit in them that they want to go back and some even keep going the next semester,” she said. She also said that participating in these activities has even led students to join other service-oriented clubs such as Food For Thought. It is important to realize that not everyone is Catholic or takes part in the Catholic traditions of Marymount University. However, the traditions and mission of the Religious of the Sacred Heart of Mary affect everyone at the school because it is what drives the institution. The RSHM has an impact on how certain programs and clubs function and while it may not be obvious, the influence is still there, regardless of whether or not students are explicitly informed on the history and mission.