The Heart of Marymount: Remembering our Founders 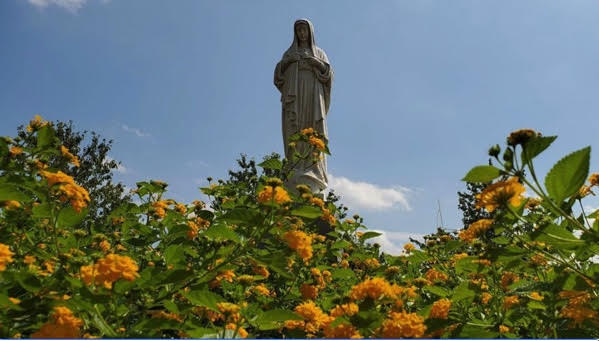 The year 2020 is a cause for celebration here at Marymount University. The banners are all hung, and the events are all planned in order to commemorate 70 years since this institution’s founding.

But what is really being celebrated?

Before presenting the ways that this community is still alive in the University, its purpose first needs to be understood. It is also imperative to note the global reach that the RSHM has had throughout history, and continues to have to this day.

As found on their website, the Religious of the Sacred Heart of Mary defines themselves as, “women called to belong totally and unreservedly to God in prayer, action, and community.” They also state, “since our founding in 1849, our mission to know and love God, to make God known and loved, has been continuously deepened and transformed.” This mission is not only demonstrated throughout Marymount’s history, but internationally.

This overview of their mission continues by revealing that the “empowerment of women and children is a focus that unites us in thirteen different countries: Brazil, England, France, Ireland, Italy, Mexico, Mozambique, Portugal, Scotland, USA, Wales, Zambia, Zimbabwe.” “Since 1907, the Religious of the Sacred Heart of Mary have operated schools and colleges in the United States, as well as international schools in Europe.” And finally, they became “affiliated with the United Nations in 2006 as a non-governmental organization (NGO) associated with the UN Department of Public Information.”

The mission of RSHM has taken them all over the world and intertwined them with many projects and organizations.

Father Joseph Rampino, the University Chaplain, speaks of his time of priesthood in the Diocese of Arlington relating to the RSHM by stating, “I never ran into them a whole lot myself, personally. I know Marymount has obviously been here since 1949, at least, in its more or less current form and that’s been the biggest influence of the Religious of the Sacred Heart of Mary, certainly in the diocese.”

The fact that Marymount is a small part of this international community is extremely special and something, as an institution, to be proud of.

Coming back now to this school’s personal community; just because this University was founded 70 years ago does not mean that the impact of the RSHM has diminished. It is important, now more than ever, to reinvigorate the spirit of this community and make sure that the students, staff and faculty understand the modern significance.

Does the student body as a whole understand the importance and appreciate the value of the RSHM as it relates to Marymount University today?

According to Dr. Todd Rimkus, Professor and Department Chair of Biology and Physical Sciences, the answer is simple. He said, “I think there is a group of students who do and I think there is a vast majority who don’t.”

Dr. Brian Doyle, Professor and Department Chair of Theology and Religious Studies, seems to have a more optimistic opinion. He said, as it relates to student knowledge of RSHM, “Yeah, I think they know that this is important.” Although he did continue to add, “Especially if you end up doing certain volunteer things, you end up with certain faculty, you see how active the RSHM still are in the world and at this University.” He also said, “I think it’s available all over the place, if you just want to come, take your courses and get out, I think it can be avoided, but so can a lot of the good things we got going on over here.”

On the same topic, Father Rampino said of students, “Most of their experience of the order is either through what they are told in the beginning or through personal experience.” The ‘beginning’ refers to the introduction to RSHM students get during orientation and personal experience meaning individual interactions between students and either members or works of the community.

Father Rampino also adds, “I have not heard much of a difference between students in Campus Ministry versus students who are not.” This is a significant point, as the influence of the RSHM is not restricted to only those on campus who are religious. The ideals and values of this community are something that everyone affiliated with the University should be able to share.

With regard to sharing information about RSHM around campus, Rimkus said, “Nobody is going to beat you over the head with it, that’s not the purpose of it. The purpose of it is to give us a foundation and a common background and knowing that we’re rooted in some excellent values.”

Father Rampino explains, “There are multiple identities that intersect, certainly in the University but also in the religious community as well. We are a Catholic University that also has this specific history of the Religious of the Sacred Heart of Mary.”

Doyle also makes a statement to this effect. He said, “I want to be really respectful of the non-Catholic and non-Christian students and find a way to provide them with opportunities to learn these things without it feeling overbearing.”

Rimkus reflects on the start of his career at Marymount; about 24 years ago when first applying to this University, he remembers looking through the website. Of the religious presence, he said, “It was subtle, it wasn’t overbearing. Now I kind of feel like when you go to the Marymount website you see a lot more religious images than when I originally looked.”

Figuring out the balance between sharing the Catholic history of the University with being inclusive to the diverse population of Marymount is one that may, and should be brought up when discussing the RSHM. There is a way to be proud of the values that are set by the RSHM without pushing a religious bias onto others.

The essential influence of the Religious of the Sacred Heart of Mary does not necessarily have to be the actual religion. Yes, the Catholic background of the RSHM is a vital portion of the University’s identity, but the impact of the values of the community reach so much farther than that.

So, what is this mission and how is it adaptable to people of all backgrounds at Marymount?

“The RSHM brings a unique combination of different aspects of Catholic value and so a lot of places will have some aspects of them but won’t have all of them so I think it’s unique to here,”

Out of the many aspects of the mission of the RSHM that are evident and important, the most significant seemed to be the emphasis on supporting the marginalized, women and children, as well as the global reach of the organization.

Father Rampino speaks about this emphasis as it relates to the way that he preaches to his congregation. He said, “Despite all the different missions, the gospel that they come from is the same. So in that regard maybe a shift in emphasis, ya know, the sisters speak a great deal about caring for the marginalized.”

Doyle said, “There’s a network that’s more behind the scenes, so I think you could go your four years here without knowing much specifically about the RSHM but that doesn’t mean that their impact wasn’t experienced.” This influence pertains to the more subtle ways that the RSHM is constantly affecting the University, whether it be a volunteer program available or a guest speaker who came to visit. The authority of the RSHM makes many of these things, and others like them possible, for all members of the Marymount community to get involved in.

These opportunities again circle back directly to the emphasis that the Religious of the Sacred Heart of Mary have placed in the foundations of the University.

Doyle relates the two by explaining what he finds to be the most important values of the RSHM and how they are alive at Marymount today. “Internationality: so the fact that from the very beginning Father Gailhac encouraged the sisters to travel and by the second generation were bringing in sisters from Ireland and England, we send so many people out but we also bring so many people in and I also think the care for the poor and the marginalized is important.”

In other words, we have an extremely diverse population at Marymount, as well as many opportunities to study abroad, creating a cosmopolitan University. The care for the marginalized is prevalent in many ways at Marymount. One that Doyle specifically mentioned is the Appollonie’s cupboards–the blue cupboards that are set around campus and stocked with food to support the food insecure population of students and staff.

Not only is the purpose of the cupboards intertwined with the mission of the RSHM, but they are named after Appollonie Pelissier- Cure (Mother Saint Jean), one of the original founders of the Religious of the Sacred Heart of Mary in France.

With it being the 70th year anniversary of Marymount University, there are many things to be excited about, and there are many reasons to celebrate. One of these reasons needs to be the Religious of the Sacred Heart of Mary, not only as the founders of Marymount University, but as the greatest, and most evergreen, influence of community values a modern institution could ask for.