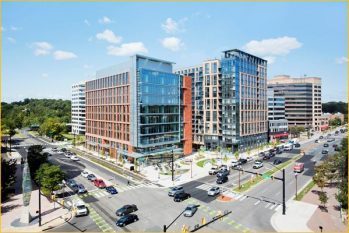 Marymount University is an institution well known for its tight knit community. It’s a smaller campus where students walk past familiar faces, whether it’s a fellow student or a professor. Classrooms have up to around 23 students present in classes, so it allows students to have their one on one time with professors. The university is known to have many events, so that it allows the community to become closer. Students are close with their professors, and make new friends every day. One thing that stands out on the campus is the housing. All of the halls are close on campus, and it makes it easier for students to visit their friends and go to class. In the 2018-2019 academic year, Marymount University purchased The Rixey. The Rixey is an apartment building located in Ballston. The Ballston area is well known, because Marymount University has an off campus site located there for more classes. When the Rixey was bought, housing changed.

Marymount University initially had five dorm halls on campus. In the school year of 2019, there were four co-ed dorms- Gerard, Butler, Berg, and Ostapenko. The last dorm hall, Rowley, was an all girls dorm. Students were familiar with the housing options, and some cost more than the others. Gerard and Berg were known as the cheaper dorms, and they were convenient to students. Gerard and Berg were both connected to the dining hall, mail room, health services, and other offices. Marymount University announced on February 8, 2019 that they were buying the Rixey building, and it cost around 95 million dollars. In March, there were emails sent out to the students about living at the Rixey. It was preferred for juniors and seniors attending Marymount University. When students started to realize that The Rixey was actually going to become a housing unit, there were mixed reviews. A lot of students seemed to be outraged, because to them it seemed last minute. It was also more pricey than the dorm hall, Ostapenko. That dorm hall was the most expensive dorm hall, because it mirrored an apartment. The rooms in Ostapenko (Osta) contain a living room as well as bathrooms, and a kitchen area. The housing office began receiving phone calls, and emails regarding the big announcement- The Rixey.

When the Rixey was announced, students were excited to hear that a brand new apartment would be available to live in. It was a new building, with brand new rooms, so students were excited feeling like it was a step up for Marymount. Soon, students began to realize that they might have to actually live there without a choice. Marymount University announced that they would be closing Gerard and Berg as dorm halls. Those halls had a majority of Marymount students living in them. Marymount’s goal was to have freshmen and sophomores live off campus, and have the juniors and seniors live at the Rixey. The President of the University, Irma Becerra, said that her intention was to get the juniors and seniors ready for their internships. The Rixey is located right near the metro, and it would be easier for students to travel to get those internships. Many students felt blindsided, especially the upperclassmen, because they were the ones having to move.

Sophomore Krist Adofo, who was a freshman at the time of the Rixey announcement felt like the Rixey was an unfair housing option. Adofo is now a student leader on campus, and The Rixey is the main housing option for him next school year. He stated that the Rixey was unnecessarily expensive, because he was able to see what the rooms in The Rixey looked like. He stated, “Honestly, the rooms were not that much bigger than the rooms in the halls on campus.” Adofo currently lives in the Ostapenko dorm, and he feels like they resemble each other. Adofo plays on the Marymount men’s basketball team, and he has had multiple discussions about the Rixey with his teammates, especially the upperclassmen. Adofo stated that his teammates as well as others felt like the price to live in a double room wasn’t worth it. Adofo mentioned that out of all of the seniors on the team, only one lives at the Rixey. Most of the seniors live in a house together off campus.

Marymount is a huge commuter school, so some students weren’t affected by the Rixey, but some still carried opinions about the expenses. Carmel Roohi, a senior at Marymount University is a commuter. She lived on campus her freshman and sophomore year, but decided to commute the remaining years to save money. Although Roohi does not live at the Rixey, she has friends that do. Roohi also agreed that The Rixey was too expensive for what they were offering. She laughed and stated, “For all that money, they could at least put some nicer furniture!” Roohi said that she felt bad that her friends had to pay more money and that they had no choice. She stated that they were “thrown” in there. Another problem she mentioned was the lease. She felt like the price to live there should’ve made the lease at least a year. In her eyes, Marymount was a bit selfish when it came to the process. Not everyone can afford the housing, so it left students stuck. Currently, to live in a double bedroom in Rowley it costs $4,650 per semester. To live in a shared bedroom in the Rixey it is $7,500 per semester. That is a big gap, and for some people it was worth it. To others, the price was too much.

The housing staff knew that students and parents would have questions and complaints regarding the Rixey. They tried their best to make people feel comfortable about the change. The Rixey staff started to give tours to the students so they could see what the building looked like. Students were able to see the rooms, and all of the facilities involved within the Rixey. It contained a weight room, a jacuzzi on the top floor, as well as a lounge, and an area to grill food. From the top floor of the Rixey, outside, one is able to see all of DC. Many students felt like it was expensive, but it was worth it, because they love it.

Junior, Faith Allen, currently lives at the Rixey. She explained that The Rixey wasn’t that expensive to her. To her, the price was worth it, because she loves having her own bathroom and kitchen. Allen liked the idea of being an adult and living in an apartment. The only thing that she didn’t like was that she felt like it was too last minute. To her, Marymount was unorganized and didn’t give students much notice about the Rixey. When she finally decided to start the housing application for The Rixey, she had many questions. Allen included that the housing staff weren’t punctual enough when it came to replying back to her. She said, “When a big change is being made that affects others, it is important to make those people feel comfortable.” Allen does not regret living in The Rixey, and she loves it. The Ballston campus is right across the street, and she also has her car so she can drive to the main campus if she wants. She mentioned that she hates the parking price at the Rixey. It is $100 a month, which can add up to an extra $800 for the school year. Allen didn’t like the fact that it is cheaper to get a Parking pass for Marymount’s main campus. There were many expenses involved with the new apartment.

President Becerra mentioned that it was convenient for students to live at The Rixey, especially when it involved using the metro. Some people agreed, because students who live at the Rixey have access to restaurants, and places to shop. It’s a great area that is city-like. The Ballston campus is right across the street, and students living at the Rixey can walk across the street to class. Adofo mentioned that he personally still wouldn’t want to live at the Rixey, because most of his classes are on the main campus. The University has a shuttle service that takes students to and from Ballston campus and main campus. He felt like most students had classes on the main campus, and the majority of the classes at Ballston were for graduate students. He felt like undergraduate students should be on the main campus to preserve the community that Marymount is known for. He stated that it seemed quiet and empty and now Marymount doesn’t live up to its name anymore. Marymount is known for being a community based on diversity and acceptance. He felt like it isn’t like that anymore, because half of the community isn’t even there.

Junior Brittany George felt the same way. She lives in her own apartment, but is heavily involved with Marymount events. She is on the dance team, and helps with events held on campus. She mentioned that ever since students started living in the Rixey, there have been less students at the events. Students living at the Rixey have no idea what events are being held, because they aren’t on the main campus to see flyers hanging up on the walls. George felt like it was taking away from the University, because students aren’t showing up to anything. Many people love the Rixey and many people don’t. There are a lot of advantages and disadvantages, and it will be interesting to see what The Rixey has in store for the next few years.