Recovering from COVID-19: A profile on Marymount alumna Teresa Leslie 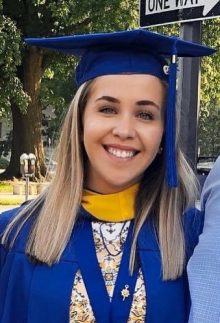 Recently, Teresa Leslie, a 2019 Marymount graduate and current nursing student at George Washington University, was diagnosed with COVID-19. While she has recovered, she explains the battle she had to overcome, since this disease is one like no other.

Leslie started encountering symptoms on March 24. She ended up in the emergency department at Fair Oaks Hospital after being exposed to someone who was positive. The symptoms varied in severity.

Following her visit to the emergency department, she tested positive for the virus five days later.

Leslie recently traveled to Nashville, Tennessee with her family, and believes that she contracted the virus while traveling home. Another family member was diagnosed as well.

“My mom also got it as well, her symptoms were worse than mine and she ended up getting secondary pneumonia but is recovering well and was never hospitalized,” Leslie states.

She recently read some case studies about people’s battle with COVID-19 and explains that her and her mom’s experiences were identical to theirs. She describes it as an experience like no other.

“Whoever stated that it was just like having a bad cold or the flu was very wrong,” Leslie said. “Not only did I feel the physical symptoms of COVID but also the anxiety of the unknown made everything that much worse! I will say, this was an eye-opening experience and I am cherishing life just a little more now!”

While Leslie has fully recovered, the process was somewhat lengthy.

To reduce the chances of being infected, she recommends taking simple precautions such as being aware of surroundings, maintaining social distancing, and washing hands frequently.

“There is no need to be in big groups of people right now just because of being bored, it truly is not worth it! I have always been careful about hand washing, not touching my face, and staying away from people during all of this but I still got it,” Leslie explains.

A few weeks after overcoming the virus, she had the COVID-19 antibody test done. This test detects antibodies to indicate an immune response to the disease.

“I highly encourage anyone who has gone through COVID or has been around someone with COVID who may think they were asymptomatic to get the test done once insurance covers it,” Leslie said. “Thankfully, [my mom and I] were both positive for the antibodies and are going to donate blood in the near future.