A touch of nostalgia for a 90’s kid: A Beautiful Day in the Neighborhood film review 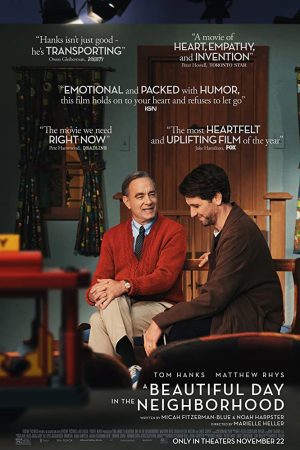 “It’s a beautiful day in the neighborhood”…for those who grew up watching Fred Rogers’s delightful television series, these words will likely have you singing Rogers’s soft jingle about being “neighborly.” In the film, “A Beautiful Day in the Neighborhood,” two time Oscar winner Tom Hanks brings the beloved star of “Mr. Rogers’s Neighborhood” to life to teach a hardened journalist about the lessons of kindness.

Based on a true story on the relationship between journalist Tom Junod and children’s celebrity figure Fred Rogers, the film chronicles the importance of human decency.

Although certainly not an action film that evokes any kind of mystery, suspense, or thrill, “A Beautiful Day in the Neighborhood” offers something else much needed in a politically and socially divided world: kindness and empathy. Hanks brilliantly embodies the warmth and genuineness that Mr. Rogers himself embodied through his soft outspokenness and long intentional stares that look into the soul.

Most importantly, Hanks advocates for mental health awareness and human worth, just as Rogers did through his popular television series. Throughout the film, each interaction that Hanks is important as he makes efforts to remember strangers’ names or reserves quality time to get to know his viewers, even at the annoyance and impatience of his producers. It is these interactions that reveal the character of the man behind America’s favorite neighbor.

The film is especially nostalgic for the 90s kids who grew up watching Mr. Rogers. Live footage from his show is featured, including his famous puppets and mini- utopian neighborhood. One scene in particular, where local school children sing the show’s famous theme song on the subway, will likely leave you singing along to the beloved childhood tune.

Overall, the film’s storyline is really not that thrilling, yet its simplicity and nostalgic effects make it worth the watch. And, obviously, it is good to see Mr. Rogers alive again.