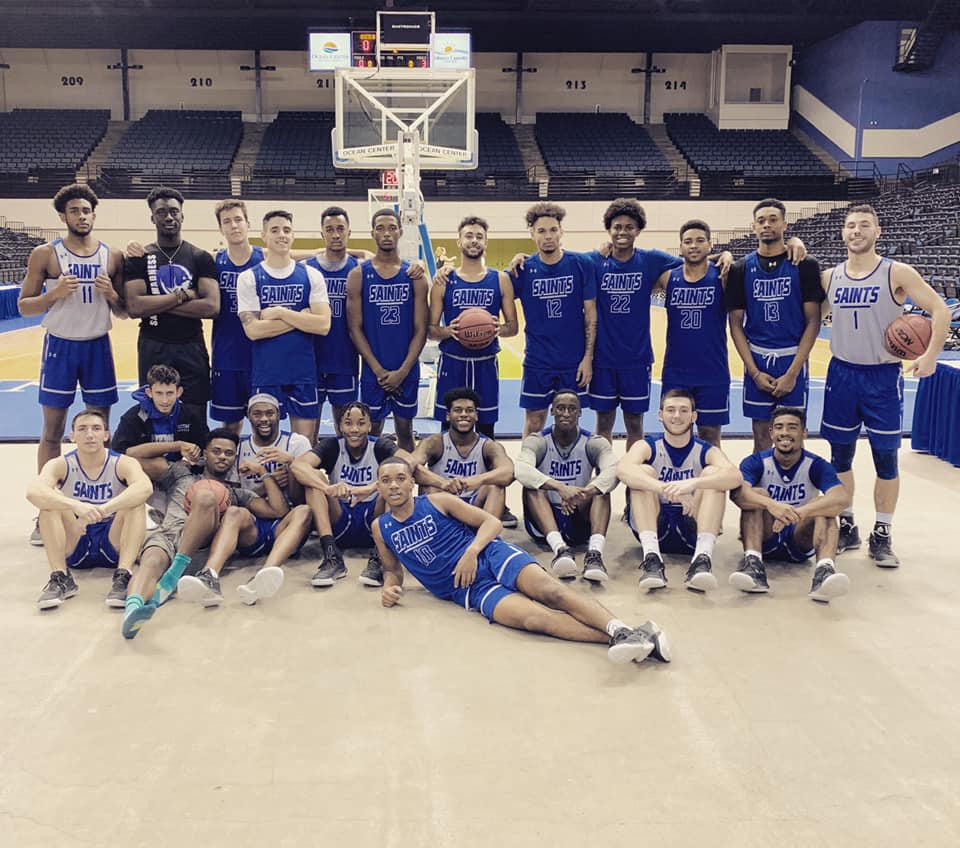 As we enter the month of October, there’s nothing to be more excited for this fall than October 15th; the official start date of the Marymount Men’s basketball season. This season should be one to remember as the team has very high hopes after their 2018-2019 season. Students at Marymount should be ecstatic, as this year’s team plans to not only win (games) but to put on a show while doing it.

Last year’s team experienced a lot of changes and went through some difficult growing pains as a result of them. Part of those growing pains might have been caused by the fact that eleven new freshmen came into the program last year. Eleven eighteen year olds playing college ball for the first time? It took guys a little time to learn the system and fall in line with the culture of Marymount basketball. Another big cause of those pains could also be joining a completely new conference with teams that were completely foreign to the Saints.

Josh Giardina, a senior of this year’s team, was asked about the challenges of last year’s season and some of the things that stopped the team from reaching their goals. He said, “One of the hardest things about last year was the new conference. We traveled to schools we had never been to. We played in front of crowds that we weren’t used to playing in front of and quite honestly it probably made us a little more nervous than it should have. It was all about adjusting and it wasn’t easy.”

Coming into the season, the young group of guys had high expectations to live up to. The team had just off a fairly disappointing season filled with so many injuries that the team was forced to practice with nine guys at one point in the season. After going 8-17, the group was determined to make sure that the 2018-2019 season would be nowhere close to the season before.

The 2018-2019 basketball season was a roller coaster ride to say the least for the Saints. Besides joining the Atlantic Eastern Conference, the team experienced some really low points as they were a young team trying to make a name for themselves. At one point the Saints saw themselves in a tough drought, dropping 7 out of 9 games during winter break and struggling to find their identity as a team with a record of 7-9. A lot of these losses suffered were close games that were lost late in the 4th quarter and some even came in overtime. The team was trying to find a way to put wholes games together and during the stretch they just couldn’t figure it out. Winter break made one thing clear, something had to change for the saints to save the season.

And something definitely did. When the second half of the season started following winter break, something clicked and the saints flipped things around dramatically. The team took that 7-9 record and ended up going the 10-4 to end the season. The Saints ran through the entire conference in the second round of conference play and looked like a completely different team.

By outplaying their opponents in the first two rounds of the Atlantic Eastern Conference playoffs, the team earned their way into a championship game with Gwynedd Mercy University in their gym. The team would then go on to lose in a battle to the Griffins by a score of 75-69. Not only was the championship lost but a spot in the NCAA tournament was lost as well; two things that were on the very top of the team’s list of goals coming into the season.

But finishing the season 17-13 was nothing to hang their heads on. Through the ups and downs or the season, the team faced injuries, adversity, and just about every game scenario that one can imagine. While it may have been hard to see following the loss, the team discovered a lot about themselves and what they were capable of getting through.

With a better sense of identity and a really good idea of what it takes to win in this league the Saints are striving for a lot in this upcoming season.

The goals for this season are no different, according to Head Coach, Chris Rogers: “The goal of this season is the same as last year, we want to maximize the team’s potential, we want to win our conference, and we want to be a NCAA tournament team this year.”

This isn’t the same team it was a year ago. Some losses and some gains to the group along with a strong mindset has this group of guys feeling confident as they are just two weeks from the start. The team did lose a little bit from the season prior, including two senior captains and three freshman. Although they lost a few pieces, the Saints are bringing in some new talent and bringing back a large portion of the team from the season before. Marymount basketball plans to rely heavily on that experience and talent to get them where they want to be this season.

The new faces in the program include Jared Perry, Nick Rivas, Amir Hall, and Tre Dunn, four very talented young guys that will hopefully be able to help the team accomplish the goals they are setting out for. 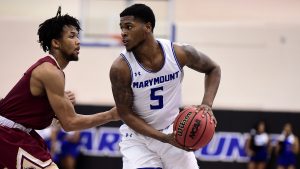 MU hoops is bringing back three out of four of their leading scores from last year with Junior, Steve Etienne; Senior, LaDarius McCord; and Senior, Ibrahim Kamara all back and healthy this season. They have seven seniors total on the roster this year that all have a lot of experience and know what it takes to get the job done. There’s no lack of leadership with this team, and the guys under them are ready to follow.

What makes this team so different if the same guys are all back? Is it talent? The competition? In looking for the biggest thing that held the team back from their goals last year, sophomore Daniel Dorsey points at the mental toughness of the team. He says, “It’s just as important, if not more important than the team’s talent.” Dorsey was forced to watch from the sideline for the whole season as his freshmen year was cut short by a groin injury in November of 2018. Dorsey explains, “Our mental toughness is something teams took advantage of last year. Whether it was one guy, two guys, or all five. A lot of games we lost had nothing to do with our skill versus theirs but who was tougher. And it was a weakness that I think teams exploited”.

There is no question that the team has the talent to succeed but this new team has grown mentally tougher throughout the off season. Dorsey says, “With strength and conditioning early in the morning throughout the week and even in pick-up games, I see a difference. I see a group of guys that are going to fight through and assuming I’m right. We’re going to be a really good team this year.”

The Men’s basketball is instilling that sense of dedication into everyone before jumping into the season. The team lives by 5 core values: communication, commitment, preparation, resilience, and humility and with these 5 core values they belief it all creates toughness. Coach Rogers points to communication as one of the biggest core values that the team lacked last season. He said, “There was stubbornness in communicating throughout the program. There was lack of communication between players, coaches, and even between both.” But the Saints have are prepared to clean up all of that going into this upcoming basketball season.

The team is big on emphasizing encouragement and positive criticism; the Saints are focused on doing everything in their power to remove any negativity from the team. Living by these morals should play a role in the success of the team. In hoping that within all four classes, guys will hold guys accountable and make each other better, the team is excited to say the least about the things that they can achieve this year.

The Saints are confident in their team but also humble in knowing that this basketball season is going to be far from an easy journey. It is going to be difficult and there is going to be adversity but that’s nothing that the Saints aren’t accustomed to already. After the lessons of last year, the saints are more than prepared for anything the season may throw at them. From bad refs and bad calls, to the games where it seems like nothing is going in, Marymount is equipped with dealing with those kind of conditions.

The upcoming season will be fun to watch and not only should the team be excited but the Marymount community should be excited too. Last season is behind the team and while they learned their lessons from it, they plan on putting it behind them and turning this year into nothing but success. With a lot of young guys on this team and a big senior class with one more shot at a championship ring, there should be no doubt that the Men’s Basketball team will do everything they can to bring the AEC championship back to the Arlington.