Marymount, Is It Really Diverse? 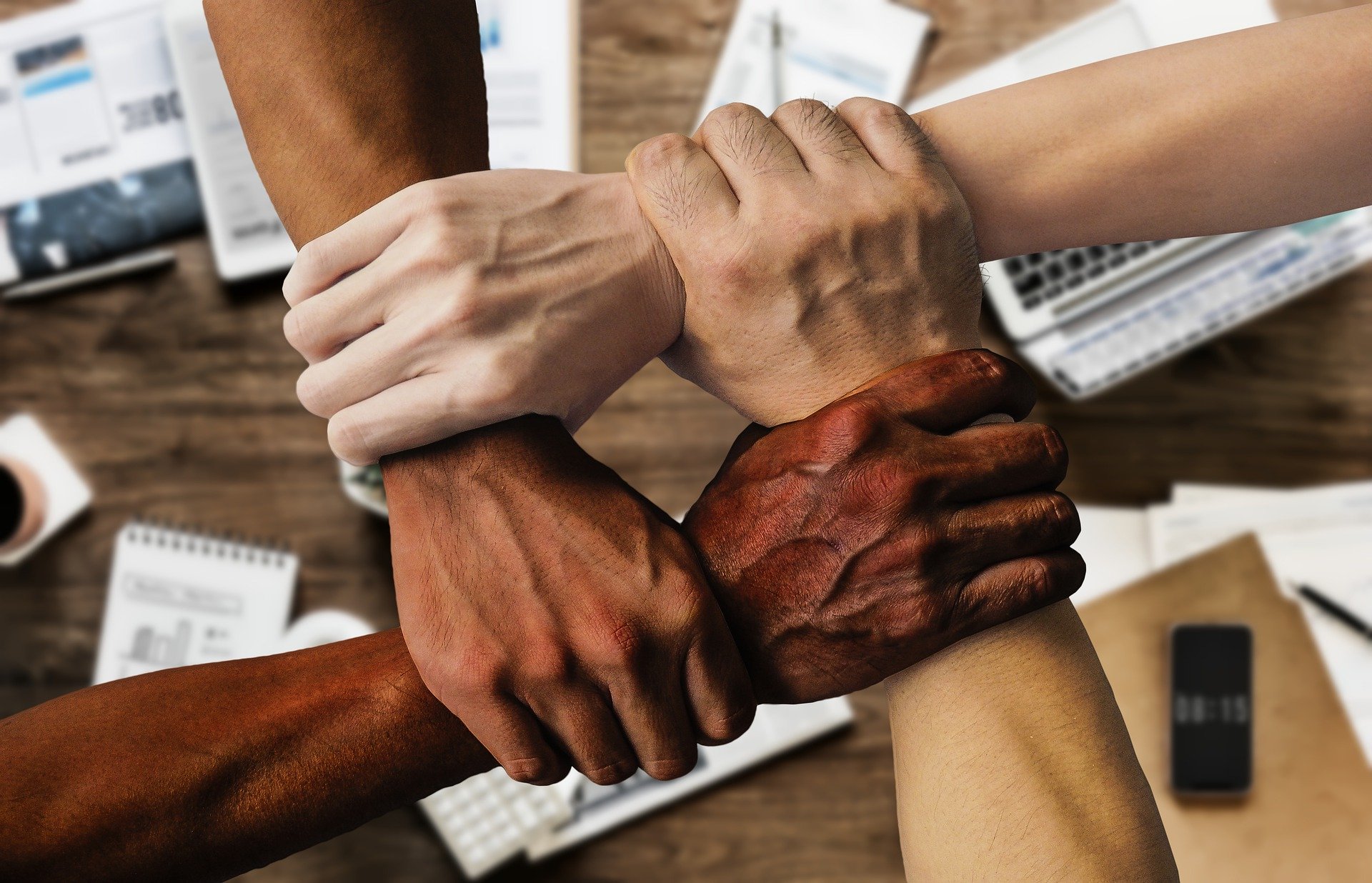 Founded in 1950 in Arlington Virginia, Marymount University has been home to many graduates that have gone on to become successful individuals. Starting off, Marymount was originally an all-women’s institution and was majority white especially during the time, however over the years Marymount has become more and more diverse in gender and race. Marymount is now a melting pot of many different backgrounds and culture that are recognized around campus.

Although the campus has become a place where students of all races can come to learn, there’s still pressures of the divide between races, especially black and white students. As a predominantly white school, or PWI, Marymount has seen an increase of black students within the past couple of year. With this increase it produces the question of if Marymount is as diverse as it looks? 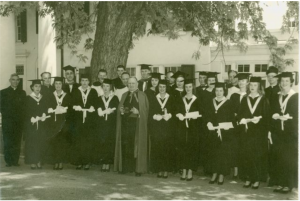 Pioneer students during their graduation

As humans,  we tend to flock to people we feel most comfortable with. For example, in this case we would think about the way racial groups immediately gravitate towards each other in any situation because of the commonalities they share.

Feeling like you belong is an important aspect in life especially when attending college, since everyone is out there on their own. With this one can receive insight on how it must feel for a black to student to not only feel out of place in college let alone a predominantly white college campus.

As a black student or any minority, the student is bound to feel like both an insider and outsider. They can feel conflicted because there is the urge to blend in with the surrounding population, the white students on campus, and also stay true to their subculture.

Black students may feel like there is a double life that must be upkept in order to survive attending a PWI.

Being the minority, black students may feel hostility and judgement from both sides of the spectrum. This may include white students feeling someone is “too black” and black may feel that a student can be too white.

In order to break this down, one must look at the environment on campus and at home.

Involvement with black student organized clubs on campus is not very popular. The clubs have many events that try to reach out to the students of color to get help them feel like they could have a second family. However, the students tend not to take it as seriously. Black student here at Marymount, Faith Allen had this to say about the topic, “ We already have activities and stuff on campus already, but you don’t see a lot of people come out to them. I don’t know what else we could do as staff members or students to bring everybody together.” 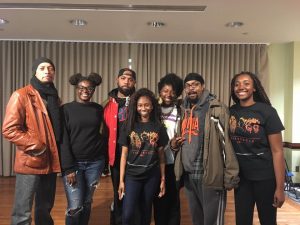 In order to help black students and other minorities feel like they belong, there are clubs and organizations on Marymount such as the Black Student Alliance and the African and Caribbean Student Association. These clubs not only openly encourage black students to join, but they also call onto other races to be a part of the community. This could be due to creating an environment that does not exclude even if it may be targeted to a specific group of individuals.

However off campus, home life can be very different.

There are many students who grew in predominantly black neighborhoods. These students may have encountered white people in their life, but they were never consistently subjected to white culture.

On the other side, there are student who grew up in predominantly white schools. These students may have had some issues with racial identity due to the fact what may seem normal to them, such as adopting white cultural practices, might seem out of the ordinary for the rest of the black community. These students spoken of may have “portrayed a corporate image closely aligned with White culture and were readily accepted by their White peer group.” Racial identity is one of the biggest issues involving black students in particular, so it can become difficult in the real world when students are faced with having to interact with both races.

Standing out is something a lot of people tend to steer clear of. It typically worsens situations for some individuals. When it especially comes to black students, it can feel like there are constantly eyes on them all the time. Attending a PWI, emphasizes that the black students are black.

It made sound harsh, but when you are one of the few of your own kind, you tend to feel the pressure. There may be pressure to act different, think different, keep your guard up, or one can simply block out the harsh facts.

After talking to a few students on campus about how they felt on the issue of diversity among black students and PWIs, there were mixed responses from all the students. Allen said,

“ My freshman year on campus was a big change for me because I went to a predominately black school. Coming here kind of shocked me a little bit, but I’m also a military child so I’ve been around different ethnicities all my life. Each year I have seen more and more different ethnicities coming such as Hispanics and black majority, but so far its pretty cool.”

In terms of diversity, all students had the same answers, for they recognize the other races besides black students, so the campus to them is pretty diverse. However, diving deeper into the specificness of attending a PWI, student Musay Taylor says, “How do I feel about it? I mean it’s not as united as I would want it to be.”

Taylor also goes even further to say, “ You would feel weird being around a group of people who don’t understand some certain struggles you have had to come across. There will be times where they will make you feel weird about being black just speaking from experience.”

As you pick people’s brains, it is clear there is a sense of exclusion from the community. Allen and Taylor are both black students who generally feel the same about the diversity on campus. However, they seem to understand that there are barriers within the campus’s community.

Groups on campus are still the same as you would see in a cliché high school movie. Students sticking to their individual cliques to feel a sense of familiarity and normalcy. Taylor even speaks on this topic with an interesting comparison,

“ You know how in zoos each and every animal is in its own section? That’s the kind of thing I mean by divided up. You’ll never see that many students all talking together. It’s just how it is. We don’t really push for others to talk to other cultures.”

Outside of a black student’s perspective, do white students recognize the divide in their own community?

White student here at Marymount, Kevin McDonald, had something to add to the discussion,

“While I think there have been incidents that have strained the interactions between black and white students on campus in the past, I do not believe that it is an issue at this current point in time.  From my day to day experiences I have seen nothing but positive interactions between students of different races, religions, etc.  No matter where a person goes on campus, not one race is predominantly present, everywhere is a mixture of different races, religions, backgrounds, etc.”

As a majority, it’s easy to see the more positive side whether white or black. For example, black students attending an Historically Black College, or HBCU, immediately feel like a majority. Outside races that are normally the majority such as white students that attend HBCUs automatically feel divided.

As much as one may want to fit in, it can be difficult when the environment and community is not in your favor. Student Leann Loch added the struggle and a good example on what it’s like to be a minority on campus:

“ As a Latina with fair skin, I struggle with my identity because of what I look like. It is common for others to assume those who are Latinx to be darker in complexion. I feel like society automatically treats others on the basis of skin color. At times, I feel like I have to carry myself a certain way, so people do not invalidate the qualities that shape who I am. As humans, we are constantly trying to prove ourselves, so we are not considered “not enough” or “too much,” which is the downfall of embracing diversity and differences in society. “

Marymount is an institute that has over the years gained new faces of all backgrounds. However, to this day the racial divide continues to prevail over the students on campus. With this brings the question of how to fix this divide. Allen encourages all students to get out and participate: ” I feel as though we should do something that would be fun in everybody’s eyes for every race on this campus.”

Trying to bridge the divide is something that should be of a group effort. Both races must get out of that comfort zone and really interact with one another. Trying to understand each race comes with actively listening and joining in on activities and events on campus.

Although opinions may differ, each student seemed hopeful of being able to mend that divide among the black and white students. Taylor speaks on keeping an optimistic outlook with uniting the campus with stating, “ It could work.”

It can seem as though the journey to a harmonious campus may be long or just around the corner for some students. Regardless, the journey to what Marymount has become now is more optimistic for the journey ahead to seeing even more diversity and interaction among the students of Marymount.