Dancing their way into a new community: Marymount deans coordinate a flash mob for Rixey students and the Marymount community

Apparently, some of the members of the Marymount community are quite talented in their dancing skills. During practice sessions, one of the dancers remarked, “They pretty much had it down after the third time.”

On Marymount’s campus, flyers about “something” coming to Ballston flooded campus halls and dorms. That something did come, and came with energy. On Thursday, Oct. 10, Marymount academic deans, students, and faculty surprised the community with a spontaneous flashmob in the Ballston courtyard.  The flash mob was coordinated by Marymount’s academic deans in partnership with dancers from the Bowen McCauley Dance Company, a local contemporary dance company. 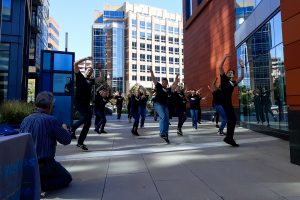 The dancing began when Saint Motel’s “Move” began to blast from the speakers. Donning black T-shirts, members of the flash mob organized and performed an organized dance for the growing crowd. Unbeknownst to Marymount students, participants had been training with dancers from the Bowen McCauley Dance Company in preparation for the event.

When asked about what it was like to teach Marymount faculty and staff how to dance, a member of the dance company stated, “It was fun. We created the dance in such a way that we figured  most people could learn it , especially with a little bit of practice.”

Apparently, some of the members of the Marymount community are quite talented in their dancing skills. During practice sessions, one of the dancers remarked, “They pretty much had it down after the third time.”

This practice paid off as members of the Marymount Community showcased their skills alongside dancers from the Bowen McCauley Dance Company. The flash mob gave two performances of choreography as Marymount students stood in awe and enjoyment.

The purpose of the event, according to Dr. Christina Clark, Dean of the School of Design, Arts, and Humanities, was coordinated in an effort to build campus community to the students living in the Rixey. 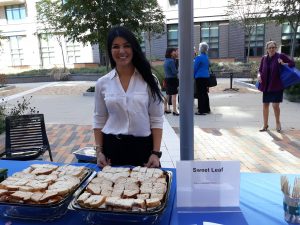 Also included at the event were vendors from Ballston BID, Sweet Leaf, Young Invincibles Health Insurance, and other Arlington based organizations. To the delight of visitors, the vendors distributed free T-shirts, food samplings, and prizes.

The “spontaneous” event at Ballston courtyard was able to attract a crowd of Marymount students, faculty, and staff. For the appreciation of their efforts, the flash mob was received with applause, cheers, and smiles from the Marymount community.