Clowning around: A movie review of IT Chapter Two

Posted by The Banner on Wednesday, October 2, 2019 · Leave a Comment 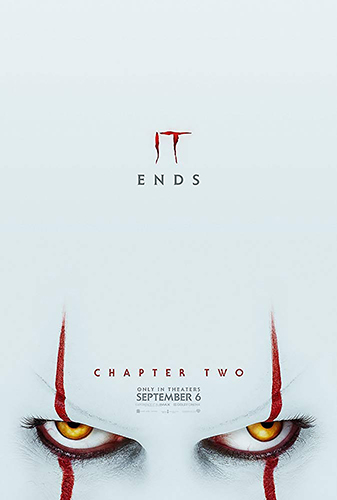 “It” is back. After 27 years of being apart, the “Losers” squad reunites in a 3 hour fight to finally end the reign of terror of Pennywise the clown. The gang reunites in small town Derry after the killer clown makes a reappearance.

Notable actors portraying the iconic grown characters include Golden Globe winner Jessica Chastain (Beverly Marsh), American comedian Bill Hader (Richie Tozier), James McAvoy (Bill Denbrough), the star of the  psychological horror, “Split” (2016), and the clown himself, Bill Skarsgård (Pennywise). Although these are distinguished actors, it is Hader’s performance and comedy which seems to be the highlight of the film. Even in the midst of terror, Hader will crack jokes that will either make you cringe or laugh hysterically at the dark humor.

Also notable in his performance is Skarsgård. Whether you fear clowns or not, Skarsgård’s sudden bodily jerks and eerie tone of voice will likely make you squirm. His performance as Pennywise the clown transforms a figure of children’s carnival fun into a sinister, violent killer.

In terms of the horror in the film, there are many jump scares. And blood…lots of it. Yet, the graphics in the film are often too dramatic and not effective when achieving horror.

Although there are many monsters  that appear in the film, they seem to be designed for cartoons rather than a live action horror film. In addition to the jump scares and animated monsters, there are also psychological horrors in the film. The film features the fears of many including closed spaces, spiders, heights, and bullies.

However, what the film does achieve is nostalgia. For those who have seen the first film, expect to feel sentimental.

Throughout the entirety of the film, there are flashbacks of actors from the first film portraying the younger versions of the now adult characters. It is highly recommended that those thinking of seeing the film watch the first film. Not only will you have an understanding of what is happening in the second film, but you will also be able to become part of the nostalgia.

Overall, for those who have seen the first film the “IT Chapter Two” is worth a watch. But plan accordingly, the film is 3 hours long. However, for those who are squeamish or who find monsters absolutely boring, consider skipping the movies until the next horror film premieres.