How are Dating Apps and Social Media Changing the Love Game for College Students? 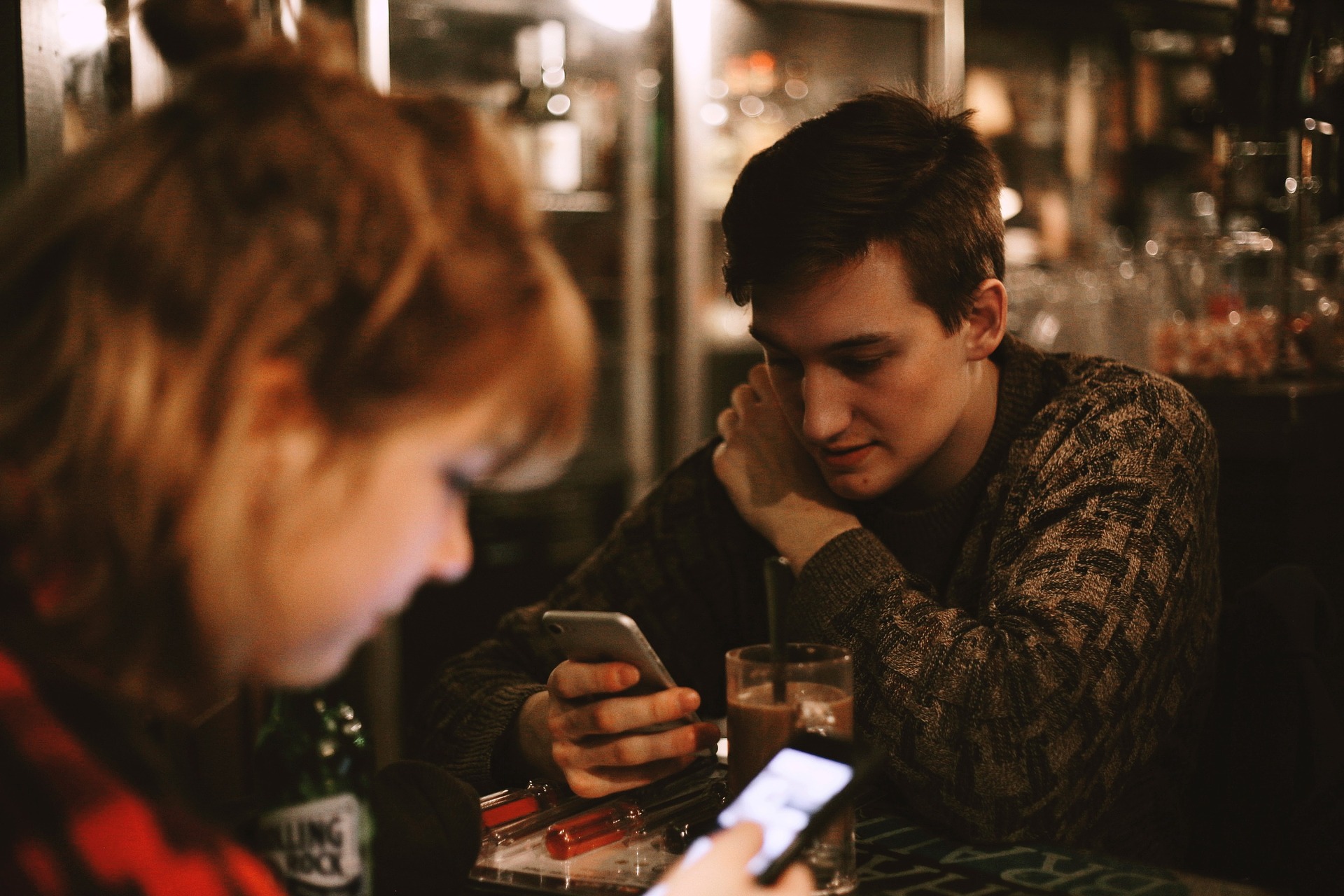 Social media apps like Instagram and Facebook have also been areas where people can meet and talk. A way that many people start conversations on these platforms is either through commenting on pictures or the most common option is referred to as “sliding in the dms.”

Online dating has become a popular activity that the majority of today’s younger generation has resorted to. The advancements and growth of technology have led to the increase in utilization of various social media platforms/ dating apps. As a result of this, many individuals have exchanged in person interactions with over the screen communication instead. This easy and quick means of finding a significant other has caught the attention of many busy college students all around the country. Some individuals have refrained from participating in this, but the reality is that this group is minute.

Matchmaking is a phenomenon that dates all the way back to 1685. During this time, citizens would place personalized ads or infographics in the local newspapers to provide interested readers information about eligible bachelors and bachelorettes. Centuries later, in 1969, the first matchmaking program utilizing a computer was introduced. With this, the creators would match potential couples based upon their likes and dislikes. Approaching the 2000’s, technology really started to flourish with the abundance and accessibility of various kinds of computers, tablets and most popularly the smartphone. But it wasn’t until 2007 when the first dating apps on the market were introduced. Today, there are over 49 million people actively engaged in a total of about 8,000 different dating apps.

With its tremendous success over the past decade, this market has expanded and broken off into various categories to better tend to consumer needs and wants. Apps such as Christian Mingle, are geared towards religious individuals who seek to find a partner who shares the same core beliefs. Bumble is another popular platform that is best known as the “feminist dating app.” The company uniquely separates themselves from their competition by allowing women to make the first move on whoever they take interest in. Lastly, there is Tinder which introduced the swiping game that gave the company massive amounts of success and liking. The app gives users the option to swipe right to like, swipe left to dislike, and super like to indicate extreme interest.

College students make up a big portion of the online dating market. The utilization of dating apps can be seen on various college campuses around the country. According to several statistical analyses, men make up a higher percentage of this market at 52.4% whereas women amount to a much lower 47.4%.

The question at hand is, “what possible implications can this pose on today’s youth”? When asked about this, a sophomore studying Fashion Merchandising at Marymount explained, “I think that online dating apps along with social media platforms have negatively impacted our society as a whole. So many people are just infatuated with what’s on their screen rather than what’s going on around them. This can ultimately result to the potential loss of getting to acquaint oneself with a great person who may be standing right next to you.” She then proceeded to explain that dating and social media apps are making society more focused on physicality rather than personality.

Several of the interviewees were asked if they were currently active on any dating apps. The most common response to this question was no. During the first few years of college, many individuals resort to finding potential relationships with the help of various apps. Another reason for why these apps are so well used is because people succumb to joining to fit in as it has become a social trend that everyone is following. The majority of the young population is engaged in a dating app or once was.

For some, their experiences have been fun and successful while for others it has been a pointless waste of time. When asked about her current online dating status, Briana Carter, a Sophomore studying at the United States Air Force Academy said, “I am currently not on any dating apps because nowadays these platforms are just simply for hookups. If I wanted a stable relationship, I would opt to meet the person organically.”

The internet has been a blessing in terms of allowing the quick access of information, furtherment in education, and a faster means of communication. Social media and dating apps fall under the communication category. People are given the opportunity to post and share information about themselves and their day to day lives for others to see. But what is considered to be too much to share? A Marymount design student answered this through her own personal experience by saying, “I was swiping through tinder when I approached a picture of a guy on top of a girl with his bio caption stating ‘looking for a wild girl to have some fun with tonight.’ This particular instance that I encountered has been one of many. It just comes down to the fact that people don’t care about what they put out there anymore.”

Many people associate a great deal of risk when it comes to taking part in online dating. One of the most common concerns pertains to intentions. A junior studying criminal justice at American University explained, “With being a part of dating sites comes a wide range of people, some who are mature and are genuinely looking for a relationship, while others are simply looking for a fun hookup. With that being said, some people like myself, utilize the apps as a means to meet new people and to form connections.”

Another cause for concern is talking to someone who isn’t who they claim to be. This is something that frequently happens on dating apps. Users can easily utilize misleading photos, pose as another individual, lie about their gender, age, and occupation in order to deceive others to obtain matches. When asked if any of this is a possibility, Stephanie Harangozo, a sophomore at Marymount said, “Oh definitely, you run the high risk of being catfished or you can simply meet an all-around dangerous person whether that be physically or emotionally.”

Lastly, there is a higher likelihood of encountering weird and uncomfortable situations over dating apps or social media platforms rather than in person. When you match with someone on Tinder, you don’t know who that person is and it won’t be apparent by simply looking at their pictures. Therefore, you won’t know if they are creepy or not until you get the chance to talk to them. Erin Gray, a sophomore studying at the University of Mary Washington explained, “I have experienced several weird and creepy encountering’s with guys that I have matched with on dating apps. The weirdest by far was when I matched with a guy who had a severe foot fetish. He was so desperate for me to send him pictures of my feet that he even offered to send me money if I sent a few to him.”
Over a screen, people are more likely to say things that they would likely not say to that individual during a face to face interaction. It is easy to say anything behind a screen and because of that, people have become less careful with their choice of words. This in turn, has led to extreme cases of bullying and sexual harassment.

So, this leads to the question of whether people are more sexually vulgar on dating apps rather than in person. Elle Park, a sophomore studying Media Design and Communications at Marymount, explained, “Yes, I believe people are more sexually disrespectful on dating apps because they don’t actually know who they’re talking to. There’s a stigma about dating apps that cater towards fun hookups where guys are willing to say anything out of desperation just to get laid. With that being mentioned, I believe that it is the same way with girls as well.” Also in regards to this question, a sophomore studying Criminology at Marymount said, “I believe that people are more sexually blunt over dating apps because even though it is a profile with your pictures and name plastered everywhere, there still remains a sense of anonymity as you are likely to never see that person in real life.”

Social media apps like Instagram and Facebook have also been areas where people can meet and talk. A way that many people start conversations on these platforms is either through commenting on pictures or the most common option is referred to as “sliding in the dms.” This is when an individual takes the opportunity to boldly dm someone that he or she is unfamiliar with. “This has happened to me on multiple accounts where guys I don’t know have sent me a sexually flirty dm. As a girl, I find this to be completely repulsive and disrespectful. It is in no way shape or form attractive. I find it more attractive when a boy sends a sweet message that shows me that they have the intentions of actually getting to know me instead of getting into my pants,” explained a freshman studying at George Mason University.

Many people believe that dating apps have a lot of downfalls, but even with that said people tend to take the risk and join anyways because it’s easy. A user can sit in the comfort of their home in their pajamas and send a message without the individual on the receiving end seeing. Although the majority of the younger generation takes part on these apps, most of them still prefer finding their potential partner in person. “Finding someone in person would be the ideal option because that way, it is much more personal and builds up trust as opposed to just swiping on somebody that you find attractive on a dating app,” said a student studying Criminology at Marymount.

Couples that do have luck and find someone through a dating app commonly refrain from telling their friends and family about where they met that individual. Elle Park explained her reasoning for why she prefers to keep this private, “I do not want them to know because I feel like they would look down on me. Resorting to a dating app to find someone rather than meeting them in person doesn’t sound good to most parents primarily because of the negative stigma associated with them.”

The job of dating apps is to offer users possible options for starting a potential relationship. Over the past several years, apps like Tinder have cracked down on safety precautions and are attempting to have users that are truly serious about finding love on their app. “In my opinion I see nothing wrong with dating apps. It is the job of the user to make smart decisions when it comes to swiping or interacting with someone through the app. Yes, this is an easier option but with it being so easy comes a need to be more cautious about what you post or do. Individuals shouldn’t limit themselves to online outlets because you never know who you can meet tomorrow,” a junior studying Political Science at Marymount said.