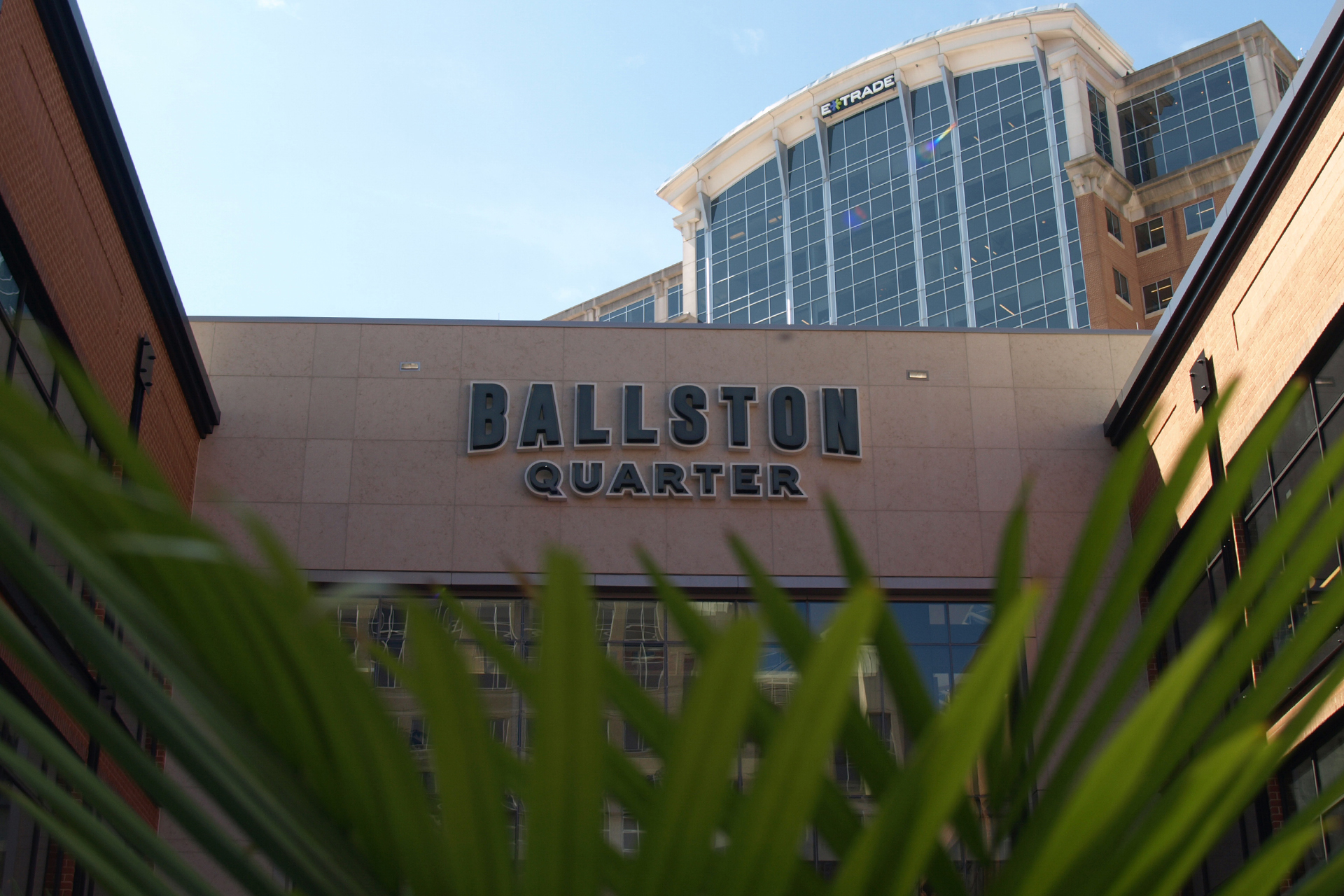 The Arlington Community announced their renovation in 2015 with a large project investment in renovating Ballston Mall into the new and improved Ballston Quarter. Ballston Quarter is trying to bring back the amazing environment they had when they first opened in the 1950s.

The new Ballston Quarter is the new “IT” area for Arlington and our Marymount community. Before Ballston Mall became Ballston Quarter and before the Ballston Mall came to be, the location was called Parkington. According to Northern Virginia Magazine in an article written by Michael Balderston, Parkington shopping center was opened in 1951 in the heart of Arlington. The metro system moved into Ballston in 1979 and Parkington shopping center became Ballston Common Mall in 1986. Ballston was the up and coming area in Northern Virginia which is also known as NOVA. Residents were moving in and Ballston Common Mall was bringing millions of dollars but as the years passed Ballston could no longer adapt to the modernization of Arlington and was left behind.

Ballston Mall was closed for renovation in 2016. The Arlington Community announced their renovation in 2015 with a large project investment in renovating Ballston Mall into the new and improved Ballston Quarter. Ballston Quarter is trying to bring back the amazing environment they had when they first opened in the 1950s. It has become a well-known and loved place in Arlington and the option of getting rid of Ballston wasn’t an option. Since Arlington wasn’t getting rid of Ballston anytime soon, they decided why not reinvent it and bring the crowd back. According to Arlington County’s  Website, Arlington contributed $55 million to bring Ballston back to life. This quarter is about welcoming the community and building a strong connection. Other areas like the Mosaic District, Reston Town center and Tysons corner are prime examples of adaptation to modernization. 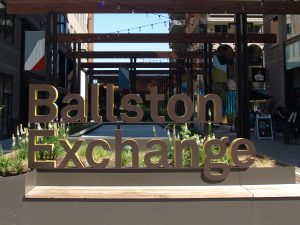 Since the start of this renovation there has been much anticipation of what the outcome will look like, what new restaurants and shops will be added as well as new resident buildings. According to Ballston Quarter’s main page, we can expect over a dozen new shops, gyms, restaurants and banks. To list a few new exciting shops there will be Allure Nails Spa, One life Fitness, Curious Kids Toys, Punch Bowl Social and much more. Arlington Newsroom has also mentioned “Construction of a new pedestrian bridge, that will span Wilson Boulevard, connecting Ballston Quarter to the Ballston Exchange building at 4201 Wilson Blvd., is a requirement of the larger Ballston Quarter project.” In addition to this they want to tie in their heritage by maintaining the Mosaic Park. Just like Mosaic District and Tysons Corner, these are going to be great places for friends and family to enjoy all day. This is just the first stage of the renovation and we will see what Ballston Quarter add to their community.

Tyler Olsen, age 28, a resident of Randolph Towers, a Dittmar owned apartment complex, is excited for the new development of the Ballston Quarter. The Ballston area houses a large community of young individuals, who in turn want an area where they can conveniently grab a bite and attend social events. Olsen works in D.C but because of the easy access of the metro, he is able to commute effortlessly each and every day. Olsen stated, “I moved to this area because it offered opportunities in my field of work than any other location. I was planning on moving to another location in the area for my new job, but I have to have easy access to the metro and bus routes. If I drove to work every day, I would have to pay around twenty-two dollars per day to park, isn’t that crazy?” Olsen needs the easy access to the metro because it is inexpensive and affordable.

A lot of commuters move into neighborhoods depending on the transportation situation in the area. Since Arlington is a resource able community offering almost every possible store, restaurant, residence, parks and lifestyle. Olsen mentioned, “When I was searching for an apartment, an important aspect was an easy access and commute to a friendly clean gym. It is my lifestyle, I work out five days out of the week. When it is nice out, I prefer to walk or bike to food, retail shops and the gym. I don’t like to drive.” The One Life Fitness center would be a perfect option for Olsen. Just like any other young 20 something he enjoys eating and drinking at local restaurants and bars in his area. With more than 75 restaurants coming to the Ballston Quarter, Olsen will have endless options.

Aysha Arif, a student of George Mason University, attends the main campus and the Ballston campus twice a week for a social work course that is offered there. Arif stated, “ I cannot stress the importance of the commute. I am a student who mostly walks to class and other restaurants while in the area.” She mainly utilizes the Capital Bike Shares. She mentioned having friends in the area and she said, “after class I like to ride a bike to their house to spend time or go to dinner.” Like many students she holds a part-time job but does not have much to spend on commute, so she appreciates the numerous Capital Bike shares in the Ballston area. Arif stated, “ I am also a big “foodie” so with all of these new restaurants I am happy to have new options while on campus.” She also stated that after graduation she would love to be able to move to the Ballston area and possibly find a job in the area. With the continuous development of the area I told her that it was very possible for her to find decent housing and career in the field she desires. 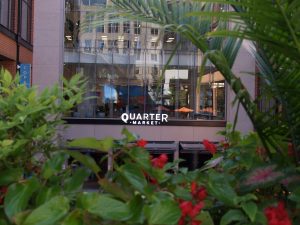 Adam Gillani, age 31 works in the Ballston Quarter area. He works as a leasing consultant at the Randolph Towers. Much like Olsen and Arif he supports the new construction set to be done to the area. He appreciates the amount of opportunity that will come from this new and improved city. Gillani stated that he has been leasing apartments for a while in the area, but he thinks this renovation is going to make the profits skyrocket. Dittmar is a well-known relator company that owns many properties in the area and charges a reasonable price for apartments, studios and condos. Gillani plans on moving to the area before things are escalating, so he can grab an apartment at a reasonable price before they jump. He thinks Ballston Quarter will become the new Mosaic District and with warmer weather approaching, he can’t wait to see new faces around the community. He also stated they are bringing in new shops and cafes which would be perfect for students, residents and commuters to enjoy during their free-time. He has made friends with consultants at other Dittmar properties, they have mentioned to him about the rent raising possibly over the next couple of years due to the development. Overall, Gillani is excited to welcome in the new and improved community Ballston Quarter has to offer.

Ballston was always a part of our Marymount community and always will be. Ballston has improved from so many years and this renovation will be the best opportunity for Arlington. Mosaic District use to be a dump with a lousy movie theater, after their renovation a couple of years ago they became one of the wealthiest areas in Northern Virginia. This renovation influenced other cities to jump on board with the renovations and investing in urban communities. Ballston Quarter will give Arlington an opportunity to increase revenue rapidly to help improve school systems and create a welcoming community. Learning to adapt to change and modernization is very difficult, but improvement is beneficial with profit, businesses, residents, school systems and much more. The new restaurants that opened up earlier in Ballston Quarter have already started a trend. People are acknowledging the effort being put into the new area and they are appreciating it. Residents, commuters, students and locals are all attending some areas of the finished parts of Ballston to test out the vibe of the community. Everyone is welcoming and excited to see what else will be arriving soon in time for the warmer weather.  People are excited for change and socialization. It is a wonderful mix of young adults and families that are going to rebuild Ballston Quarter together. The movie theater is still up and running offering recent movies as well as foreign films, bringing in diversity to the community. The sense of community was always there but the property wasn’t, so consumers are hold Ballston to a higher expectation and hoping they follow through.

In conclusion, the Ballston Quarter is a great asset to the Arlington community This is a project for from the community to the community and will benefit all that live in the area, around it or visiting. Northern Virginia is a well-developed location on the East coast and is working on becoming one of the best urban places in the Mid-Atlantic region.