Burning, Bright: Marymount’s Future as envisioned by Dr. Irma Becerra; the 7th President of the University 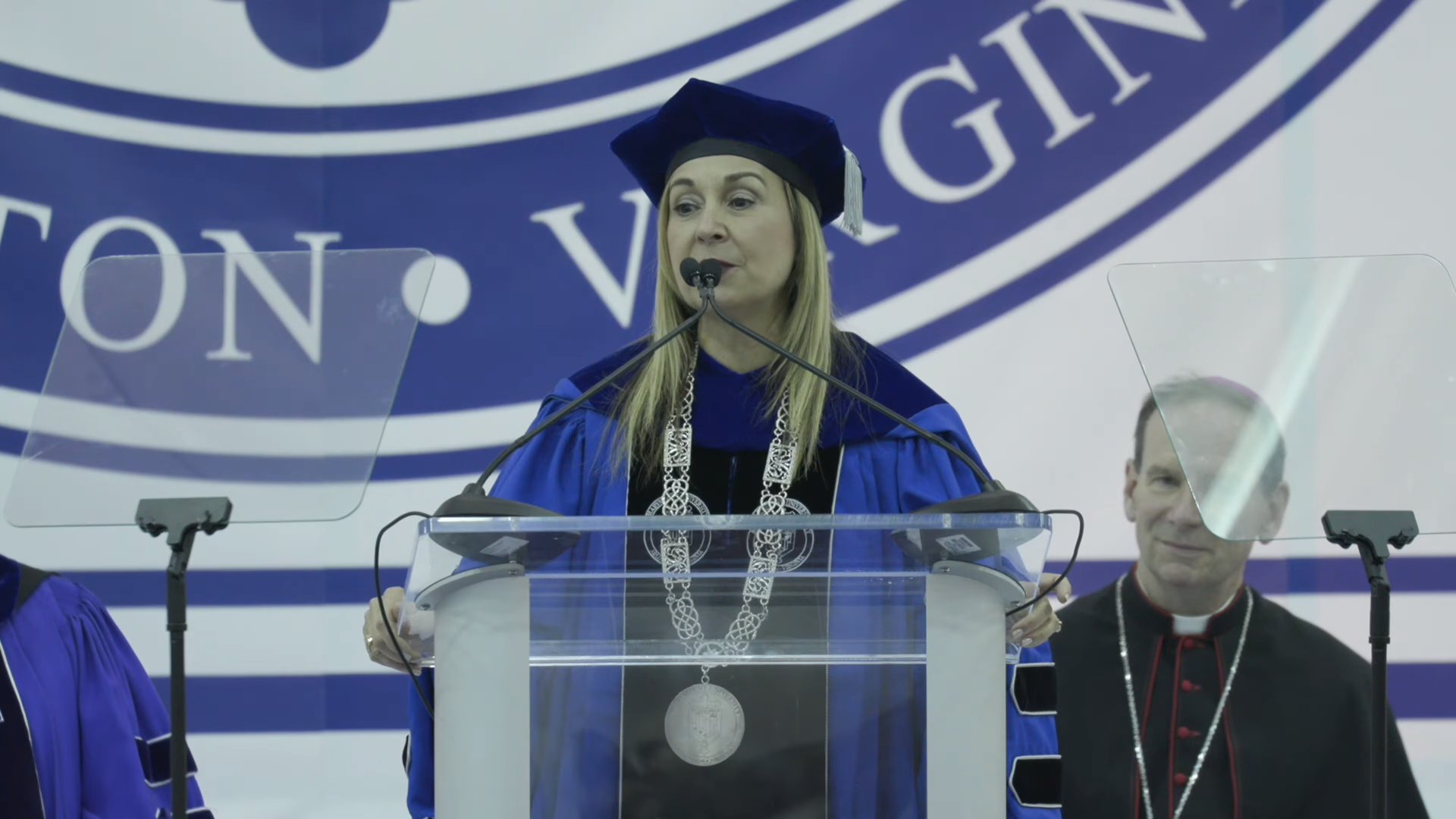 Dr. Becerra’s inaugural speech shows that she’s not about to let the University’s legacy of progress go to waste. She talked of expanding the academic programs, and the goal of growth by 2024 to “10,000 students”

Context is important, not only to the inauguration and the information that came from an exclusive interview with President Becerra, but also to give background on Marymount’s roots.

Marymount was founded in 1950 by nuns from the Religious of the Sacred Heart of Mary. In the 1960s, Sister Berg took hold and expanded Marymount’s public image and academic programs tenfold. Today, she is remembered and revered as a philanthropist, and Marymount recently opened a financial fund in her name.

In the late 1980s, Marymount opened their doors to young men and became a co-ed college. This move flew apart from traditional Catholic colleges and universities that were mostly still segregated by sex. Finally, the University’s 6th President– Matthew Shank could give us the new Blue Goose building. After years of complaints by students and faculty that the old Blue Goose was in shambles, Shank delivered on his promise to open a new building— adding a Starbucks as a bonus!

Dr. Becerra’s inaugural speech shows that she’s not about to let the University’s legacy of progress go to waste. She talked of expanding the academic programs, and the goal of growth by 2024 to “10,000 students.” The interview with President Becerra was about more than the inauguration. This article is about the jobs and duties of the President; the initiatives she pursues, communication strategies she and her cabinet implement to reach students and faculty effectively; and most importantly—how she plans to pave the way for Marymount’s prosperous future.

The strategic plan President Becerra presented during the inauguration speech was “Based on the work of Norton and Kaplan, two business researchers that proposed the Balanced Core Card Approach. There was an effort that involved the Strategic Planning Committee, trustees and issues that were brainstormed that came through [were prioritized and addressed according to their magnitude and time sensitivity].” The issues that she’s speaking of are those that are related to deciding which initiatives to pursue and which to temporarily postpone. 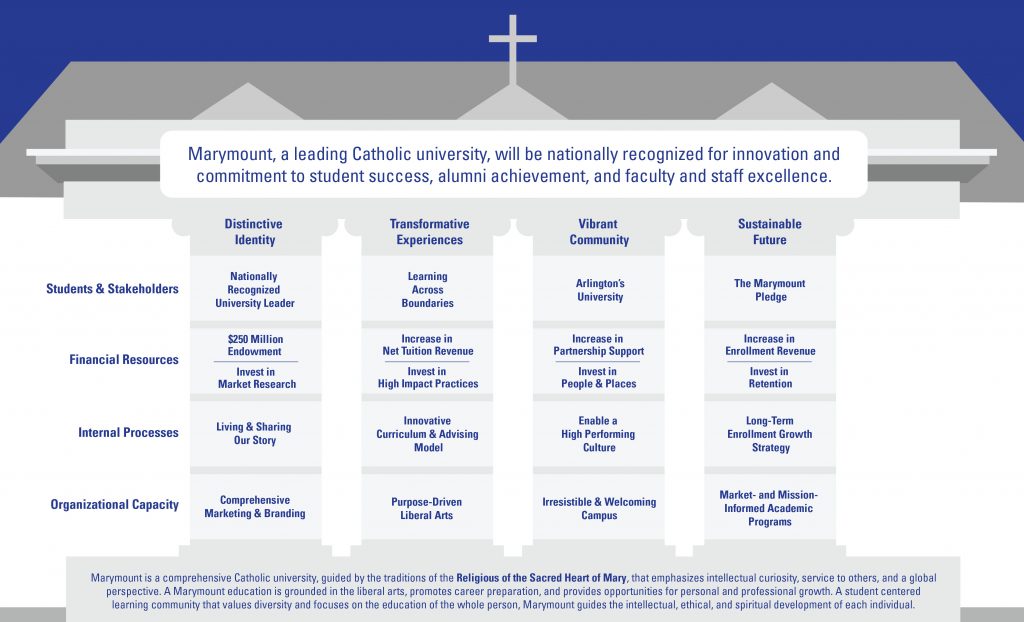 President Becerra would like the community to think of the Strategic Plan as a set of file cabinets containing a few different initiatives in the individual cabinets. The Presidential Cabinet assembled, having had previous input from the trustees so as to vote on which initiatives to pursue basing their logic on the tenets set forth by Norton and Kaplan’s Model. When asked about the ways in which she and her staff choose the most effective way to share messages—about their urgency– Becerra stated that if it is an important message, she’ll discuss it with her cabinet, if it’s a message about student life—she’ll discuss it with Dr. McMurdock— Vice President of Student Affairs, and finally, if it’s an issue related to our brand, it’s Carmen Brown. Elaborating further, Becerra stated that if it’s an important message, in academics, she’ll discuss it with the Provost who will then give it to the deans of the respective schools to share among their respective faculty. She made the collaborative nature of her position abundantly clear. The President also discussed her desire to grow Marymount exponentially within the next four years, and her inauguration speech and Marymount’s outreach, collaboration, and relationships with other local Universities—namely George Mason. “I had the chance to meet with Dr. Cabrera [GMU President] at a prior event, and we spoke about how we can collaborate. I invited him to campus. [he accepted]. We sat down to identify areas in which we could have mutual collaborations. In all collaborations, it’s about the people first—to wit, finding ways that we could collaborate and be mutually beneficial to one another.”

Expanding on the topic of Marymount’s growth (specifically relating to the idea of fully online courses), Becerra stated, “We have been discussing the launch of fully online programs since I started, and it’s been a very healthy discussion. What it has helped us discover is that we do want to have a strong online presence, we are thinking about launching fully online programs at the graduate level first—when we do that, we want to make sure we do so in a way that is reflective of what Marymount is. [Fully realized and optimized] online programs will provide one more medium for helping us share our knowledge and our expertise without losing how we are differentiated. We want be able to keep that personalized attention that we give all of our students through this online medium so that is our goal.”

The talk shifted to the discussion of new academic programs and extracurricular activities. The upcoming game design program was mentioned immediately as that was one of the two primary undergraduate programs which President Becerra mentioned in her speech (the other undergraduate program launching quickly is cybersecurity.) When asked about the logistics related to starting a new program of any kind, Dr. Becerra stated that “The program will launch in the fall. It has been in development for about a year and we’re happy that it’ll launch.”

When asked about PR campaigns Marymount has begun to help reach their goal of 10,000 students by 2024, Becerra stated “we have a TV campaign [I’m not sure if you’ve seen our ads], but the ads primarily run on Channel 7. We also have radio advertisements and social media. We are going to be pursuing a social media campaign. I am also going around to high schools in the area and in Florida.”

The subject then shifted to Marymount’s upcoming sports programs, as many students already know, there shall be an MU tennis team. President Becerra was also talking about potentially making crew a sport at Marymount. How Marymount chooses and implements new sports includes student interest, logistical/performance utilization—that is, figuring out the way in which something can reach its full potential from the onset, and finally cost-benefit analysis. She also confirmed that the building on 26th Street, across from the library and next to the park shall be housing Marymount sports (tentatively)—MU is still working on permits and exact logistics with Arlington County.

The interview closed with Dr. Becerra reflecting on the events of inauguration day “[The planning] took about three months to plan, we started planning before the Christmas break last year.” 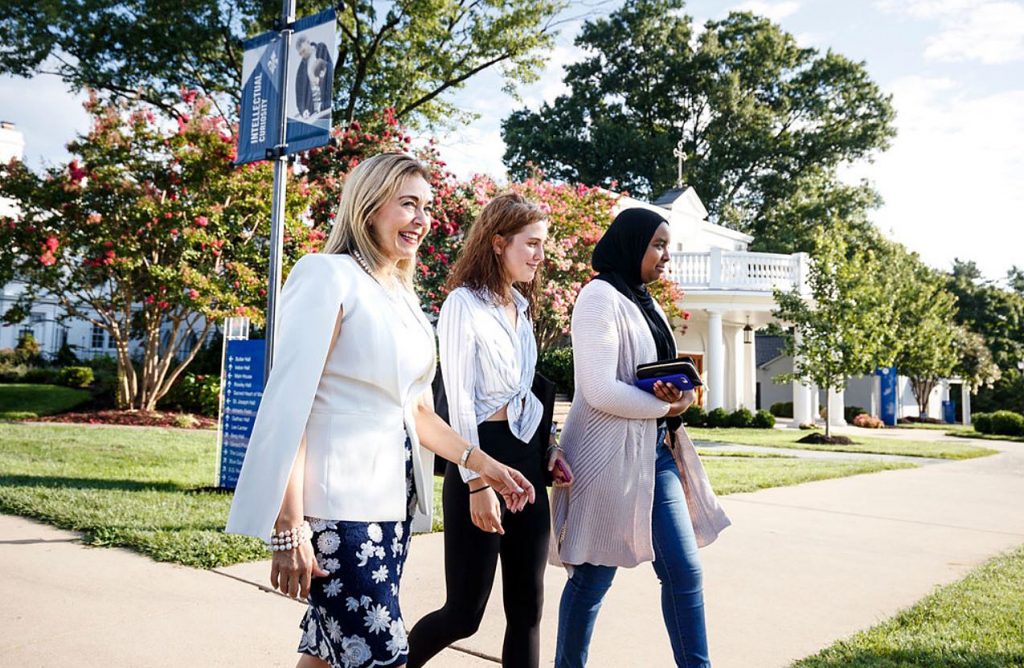 To close the interview, Dr. Becerra had a message for those students that hold similar beliefs. She said “[ essentially] The president of a university is the CEO for our academics—being responsible for [our] student life, ultimately when a person isn’t delivering on commitments, the person who is accountable is me.” She concluded that the perspective that a president merely signs papers all day and makes public appearances is a gross under-simplification of the job. Catherine Kenol and Patrick Berthelette were seniors at Marymount University who were both present at the inauguration. When asked about their first thoughts on the inauguration, they both stated that they thought it was great. They also stated that the inclusion of Dr. Becerra’s children as guest speakers was unique and important as it gave them insight into whom Irma Becerra is as a complete person.

Kenol elaborated on her thoughts of the speech. “I really liked the plan Dr. Becerra laid out for us. It was a little vague, but I think that it was probably vague for a reason; [I guess] they’re still coming up with new ideas to change the campus. I’m going to be graduating soon, but I’m interested to hear from everyone else what she does for Marymount.” When asked about what programs should be implemented to support Marymount’s growth, Kenol stated that when she was in high school and began her college search she chose Marymount because of its proximity to D.C. However, she lamented that they do not have a more diverse language program. She suggested adding Chinese, Sign Language, and German and beefing up the courses offered in French. Furthermore, she emphasized having classes like these being offered, more frequently. While on courses, Kenol answered a question regarding what classes she’d like to see added to her major. She replied “I don’t know if I did add any new courses per se. When I was registering for courses this semester—I had a hard time finding courses that I need that fit in to my schedule.” She went on, stating that she would like to see more sections of the same classes offered every semester as that would put less pressure on students if they must have that class done in that time frame.

Kenol’s interview closed with a message to Dr. Becerra, requesting that whatever happens later to keep students in the know as she has always been. Berthelette’s thoughts on the inauguration and the general direction of the university’s future serve as a more broad, yet equally important and interesting perspective.

“Overall, I thought it was an awesome experience hearing from all the speakers. I think it was especially interesting hearing from Dr. Becerra’s kids as I got to learn about the president. The primary takeaway is that she is excited to continue to make Marymount a better quality place for the students and obviously as a student you cannot help but be excited that she is trying to do so much for the students. Not that I have anything specific that I want added, but the scholarship for students with unpaid internships has me excited for future students. Going through my experience with an unpaid internship that scholarship would have been nice to have at the time because I would not have to worry about how much I spend on traveling to different places. For some parting words for the president I would just say keep the energy for the students. You can already feel a little bit of a shift in the Marymount community and part of that is due to the fact that Dr. Becerra has installed more excitement into the Marymount campus.” Marymount University is burning bright. There is no way and no want from anyone to hinder or halt the upcoming growth of this.