Exploring the anime community at Marymount

Posted by The Banner on Wednesday, February 14, 2018 · Leave a Comment 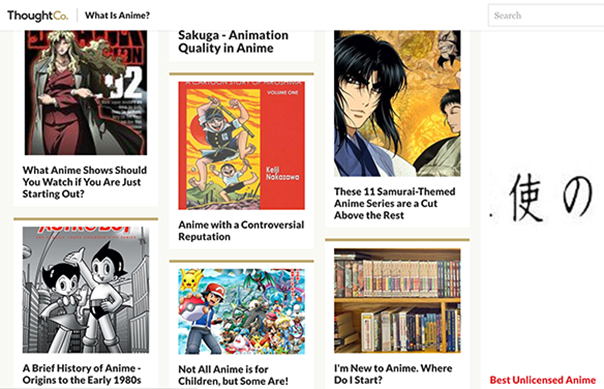 As one of the most diverse universities in the South, Marymount is home to many different communities of people. Many of these communities get together and form official University recognized clubs and organizations. These include the International Club, the Black Student Alliance, and Full Spectrum.

However, an unexplored and unrecognized community on campus is created by those who watch anime.

Anime is “a catch all term for animation from Japan” (thoughtco.com). The term “anime” is used to describe how a show is produced and is known for its unique artwork and stories.

21-year-old Tom Copas defined anime as specific to Japan and further said “it’s not exactly anime if it’s not from Japan.”

While anime is often targeted towards kids and teens, the age demographic is rising across the U.S. When asked to describe the age range of his friends who watch anime, Shane Limbaugh said “late teens to early twenties.”

An example of someone from this age demographic who loves anime is junior Katherine Romero. Her devotion is so fierce that when asked to define anime Romero said, “It’s life.”

Most anime is derived from manga. When asked to define manga, Gillian Itchon said that manga is another name for “Japanese comic books.”

Manga is read from right to left, a far departure from the American way of reading, which is left to right. Itchon read manga in middle school, but hasn’t read any recently.

What draws someone into anime is different for everyone. For Limbaugh, anime fulfilled his wish for a series with a “good plot and wasn’t all about action.”

For Copas, family drew him into anime.

“I wanted something I could talk with my brother about,” he said.

For Itchon, it was friendship. Her friend liked anime during middle school, so her introduction to anime was not by choice. She is still relatively new to anime, however.

“I watched [anime] for about two years in middle school and then I stopped and then started again recently,” she said.

In middle school, she watched Naruto and many different Studio Ghibli films, including My Neighbor Totoro.

Romero, Limbaugh, and Copas can only be described as veterans. Romero started watching anime at age seven, with her first anime ever being Pokémon and her second Naruto.

Limbaugh and Copas claim to have started even earlier at 4 years old. They both had the same starter anime, DragonBall Z, although Copas said that Yu-Gi-Oh! “was his gateway [into anime] so to speak.”

Due to social stigma, watching anime is a lot more acceptable at a younger age. For anyone in their late teens to their early twenties, watching it comes with many misconceptions. These misconceptions can cause people to hide the fact that they watch and enjoy anime.

This does not apply to Limbaugh, who said, “everyone knows I watch anime.”

“I’m pretty far out, you can walk into my room and I have Naruto posters,” Romero said.

For Itchon and Copas, openness is key.

Itchon believes that most people who watch anime “are open about it because they think it’s really cool.”

Some people who watch anime stay quiet due to the misconceptions that accompany watching anime.

“Anime isn’t a big thing here [in] America…people are kind of like, standoffish towards it, and I’m just like why?” Itchon said. She realized that once anime is mentioned in a conversation, people tend to distance themselves from both the topic and the person who brought it up.

Romero finds it hard to argue with some of the common misconceptions regarding anime.

“It is over dramatic, so they’re right,” Romero said. “Everything I’ve heard is pretty on point. That it’s overly dramatic, that it’s loud, that it’s unnecessary (the loudness).”

Limbaugh and Copas are the opposite of Romero, and find it easy to argue with some of the misconceptions associated with anime.

Copas says that the one he gets most is “that it’s all stupid.” In response to this misconception he said, “It’s like any other medium. You’re gonna see stupid stuff and you’re gonna see good stuff. It all depends on where you are gonna look.”

In addition to misconceptions for anime, there is a whole alternate list of misconceptions for people who watch anime, especially when they are in their late teens or early twenties. Both Romero and Itchon recognize one misconception that comes with watching anime; people think they want to be Japanese.

Itchon said that the first question someone would ask after telling them she watched anime would be “Are you Japanese?”

Romero said people assume “that we’re either some form of kawaii or something influenced by Japanese culture. Romero also said that another assumption made is “that I don’t have a life” because she is still watching anime in her twenties.

Limbaugh and Copas laugh at the stigmas associated with anime. This is because very often what people think is anime isn’t anime. For example, many people associate Avatar the Last Airbender with anime, when it is really a United States produced cartoon that tries to mimic various components and concepts of anime.

Romero bases her label off of anime fan-based or fandoms. Based on this, she would have many labels because she has watched many anime shows.

Limbaugh just outright calls himself a nerd. He said, “most people just call me a nerd,” and he is comfortable with this label.

Itchon doesn’t see the need for labels or titles. “I just like to watch anime,” she said.

When asked how they would convert people into fellow weebs or nerds, Itchon, Copas, Limbaugh, and Romero recommended various anime. Naruto was a common recommendation.

“There aren’t any starter anime that I know of,” Itchon said. “I would just shove Naruto in their face, and like Yu-Gi-Oh! I’m just like, here, dive in.” Itchon also recommended Seven Deadly Sins for a good laugh.

Romero recommended her first anime, Pokémon, as well as Naruto, Yu-Gi-Oh!, and Bleach.

Limbaugh also recommended Naruto, as well as One Punch Man.

Copas also recommended his first anime, DragonBall Z, as well as DragonBall. He said, “Start with the classics…[then] go watch whatever you like.”

Anime, as well as watching anime past the early teen years, is slowly becoming more acceptable in America. As this occurs, it seems like anime communities pop up overnight. The first key to making anime more acceptable is conversation. Starting a off a conversation with “anime is so weird” is not going to encourage those around you who might watch anime to open up about it.

Most of all, remember that the anime community is just there to have a good time. They are like any other group that watches television. They have things they like about anime and things they don’t. They are also open to hearing complaints and always are willing to accept new anime watchers into the community.

Most of the recommended starter anime can be watched on Netflix, Youtube, or other free media sites.