All Aboard! A film review of Branagh’s Murder on the Orient Express

Posted by The Banner on Wednesday, December 20, 2017 · Leave a Comment 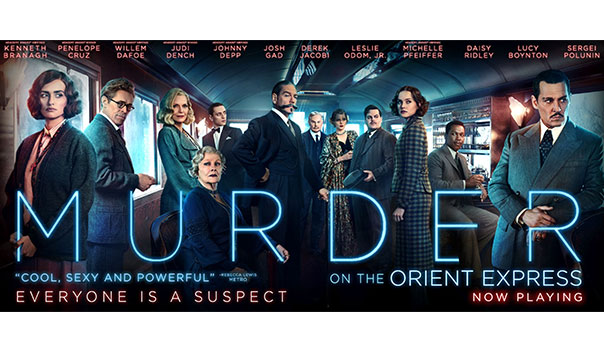 Climb aboard this railroad adventure which will leave you in suspense until the last train whistle blows. The director and star of the film, Kenneth Branagh, leads a star studded cast including Johnny Depp, Daisy Ridley, “Hamilton” sensation Leslie Odom Jr., and legendary screen veteran Judi Dench in this adaptation of  Agatha Christie’s suspense novel.

Set aboard the Orient Express, a train traveling through Europe’s countryside, a group of strangers become entangled in a murder when one of the passengers is found dead aboard the train. Trapped in an avalanche, the task to find the killer is left to Branagh’s character Hercule Poirot, one of the passengers who happens to be a brilliant and famous detective.

Poirot leaves no stone unturned as he interrogates each passenger and investigates the crime scene. Everyone’s a suspect and Poirot must race against time to find the murderer before the killer strikes again.

The setting of the film is constructively done well and fits appropriately to the theme of the story. The Orient Express, with its fine dining and fashionable interior exudes a life of luxury. Along with the actors, audience members have the opportunity to view the beautiful backdrop of Europe.

The cinematography of the film is exceptional, making the viewer feel as if they had just been lodged into a game of Clue. The long camera pans of each of the actors’ faces intensify the suspense of the film. Also, the wide and high camera angles, especially during the initial scene of Poirot’s investigation of the murdered body, make the film visually unique and appealing.

The acting in the film is also well done, but at times a bit exaggerated. Detective Poirot’s character, although played vibrantly by Branagh is sometimes too dramatic and artificial, especially with his obsession with perfection.

Daisy Ridley plays a more believable character as a young woman traveling with a secret, yet sometimes she too often falls short of real emotion. Johnny Depp, however, plays the part of the dodgy Ratchett to perfection. Also notable is husband hunter Mrs. Hubbard, played by Michelle Pfeiffer who often provides the comic relief that makes the film light and entertaining.

Overall, Murder on the Orient Express is a film worth watching. Although the acting is at times exaggerated and lacking transparency, the overall plot of the story is engaging and will have you piecing the clues together to discover who the murderer is yourself. Also, the backdrop as well as cinematography of the film will transport you back in time to a world which is believable but can never quite exist.

As stated before, the content of the film is more of a game rather than a crime scene investigation. If you are an avid reader or viewer of mystery and suspense, then this film is right for you.

Can you guess who the murderer is?