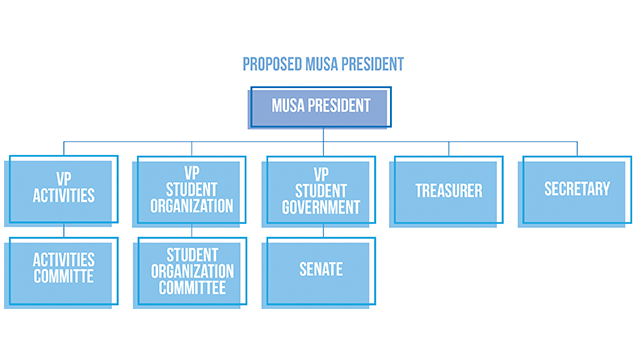 The proposed merger would mean that all three would combine to form the Marymount University Student Association (MUSA).

SGA President Brandan McCammitt said the motion must move to the administration. According to him, student leaders will have a meeting with the advisors and move up the chain of administrative command for final motions forward.

“We’ll express to them that the students of the University are looking to go in a different direction with the Big Three and this is the sort of model that we would like to start the discussion with,” said McCammitt.

“We’re formalizing an already existing structure,” CCC President Gordon Baer said. “If we moved to this model… the roles of the student organization leaders wouldn’t change, but they would be in a much better position to communicate with other student leaders and advocate for themselves and for the needs of their organizations, since it is a more straightforward chain of command all the way up.”

According to Baer and McCammitt, who proposed the merger at the last SGA meeting, all of the organizations would essentially remain the same, possessing autonomy and falling under the preceding SGA statutes and revised constitution.

“We would have the SGA Senate, the CCC Committee, and the Activities Committee just as we do now,” McCammitt adds. “The Clubs branch would be the clubs’ allocation, assisting them, and the Activities branch would remain in control of big campus events. [The financial authority] continues to remain under the student government branch, along with raising student concerns to the administration.”

The Executive Cabinet for this novel merger would consist of an MUSA President, President Pro Tempore, Treasurer, Secretary, and three Vice Presidents, one representing Student Government, one for Activities, and a third for Student Organizations.

Within this system, the CCC and ACE chairs are altered to form two of the three Vice President seats of MUSA. The positions of President and Vice President of SGA would then essentially merge to create a third VP seat. These three positions would formulate an “umbrella model,” according to McCammitt, and would be equivalent under a sole student body President, a lead representative for all the organizations.

A Treasurer and Secretary will also be kept, the Treasurer serving all the organizations. The Senate remains a body under SGA and the Judiciary continues as a separate branch, keeping a check on the association.

At the meeting, McCammitt discussed the origination of their constructed proposal.

“The generalized concept behind this started two years ago by having Big Three meetings, [consisting of] the head of ACE, SGA, and CCC meeting with one of the Big Three’s advisors to sort of enhance our communication and let each other know what was going on.”

If this model is successfully implemented, McCammitt notes it’s designed to add more consistency to the student engagement and leadership on campus.