“When I was marching I was thinking of all of my students.”: MU professors stand with the Women’s Marchers

Posted by The Banner on Thursday, February 9, 2017 · Leave a Comment 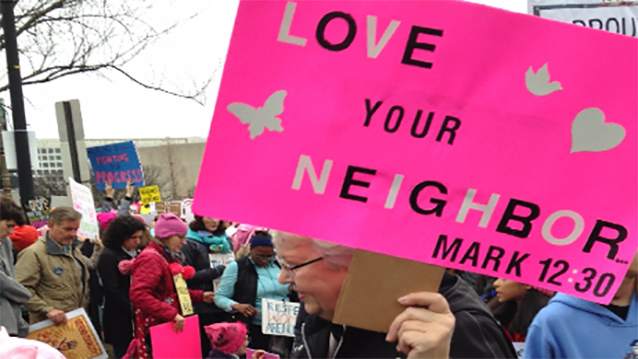 In a January 28 message, Shank affirmed that, “Our ‘common ground’ theme is the foundation of Marymount’s vision, mission and core values.  Stated simply, we come together with unique perspectives from many backgrounds, but learn and leave Marymount sharing and embracing our values of faith, diversity and respect for the dignity of all individuals.”  This sentiment is front and center in the “Common Ground” page of Marymount’s website:

What we value: A comprehensive Catholic University, Marymount is distinguished by a culture of engagement that fosters intellectual curiosity, Service to others, and a global perspective. A Marymount education inspires and empowers students to become active, lifelong learners; leaders with a desire to serve; and informed, involved citizens of the world.   (http://commonground.marymount.edu/index.html) 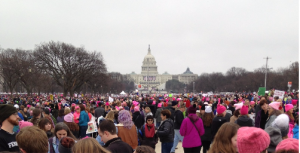 These are not idle words for the University: Marymount professors act on them. Several professors recently marched for the dignity and equality of all people at the January 21 Women’s March on Washington.

On its website, The Women’s March Mission was to, “send a bold message to our new government on their first day in office, and to the world that women’s rights are human rights. We stand together, recognizing that defending the most marginalized among us is defending all of us.”

According to Howe, Associate Professor of Literature and Languages, “the values of integrity, compassion, equality, and care for others is–and ought to be–deeply embedded in our University culture.”

Howe lent her feet to the Women’s March to support all human rights by fighting for women’s rights.

“As Americans, it is our civil right, even duty, to speak loudly when our values are being compromised,” she said. “I believe firmly that all individuals have a right to bodily integrity, and that women’s rights are human rights.”

Doctor Ficke, Associate Professor of Literature and Languages, had similar reasons for attending the March. For Ficke, defending potentially marginalized students is important.

“When I was marching I was thinking of all of my students, who could be negatively impacted by our government’s actions. The diversity of our campus is our strength, and I want to preserve that diversity because it is a key component of a good education,” said Ficke.

On Ficke’s sign was a quote from Dr. Martin Luther King’s famous Letter from a Birmingham Jail, “Will we be extremists for hate or for love?”

According to Sister Jackie Murphy, RSHM, Marymount College, later University as we know it, was established under the Catholic Order of the Religious of the Sacred Heart of Mary (RSHM),  “in line with the whole Women’s Movement” of the 1960s especially to support women.

Sister Murphy stated that the Patron of the RSHM, Father Gailhac, conducted his ministry in France by educating women sex workers so they could learn other skills and live in a manner to better care for their children. Gailhac, a Catholic Priest, supported the marginalized in the 1800s. 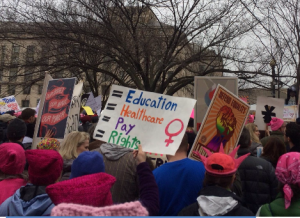 Supporting the marginalized is in line with Catholic Social Teaching. On its website USCatholic.org declares that under Catholic Social Teaching, “People have a fundamental right to life, food, shelter, health care, education, and employment. All people have a right to participate in the decisions that affect their lives.” As a Catholic University, Marymount supports these principles.

Another marcher, Dr. Marguerite Rippy, is proud of Marymount’s Catholic values. “I think as a Catholic university, we have a strong connection to social justice issues, which has always made me very proud,” she said. Rippy joined the March “to bear witness and be counted in opposition to the current president’s stated policies against women’s health, refugees, immigrants, and basic human rights worldwide.”