Posted by The Banner on Thursday, December 8, 2016 · Leave a Comment 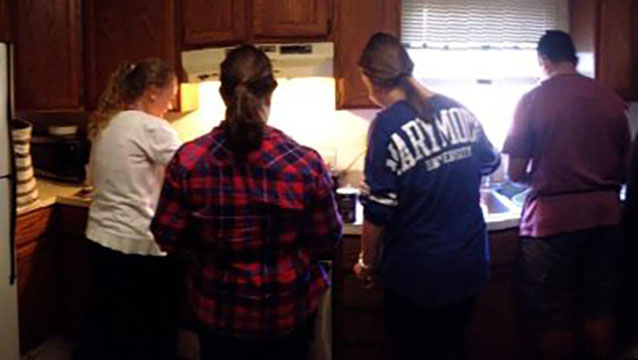 November 12 – 20, 2016 is Hunger and Homelessness Awareness Week. Read on to see how you can join with fellow students to make a difference.

People experiencing homelessness desire community and a place to call home, said the New Hope Housing Director of Development, Jan-Michael Sacharko. He has worked to end homelessness for 15 years. According to Sacharko, without an address, it is very difficult to get a job. Without a job, it is impossible to pay for a place to live. This makes homelessness cyclical. Since 1972, many long-term mental institutions closed down and smaller, community-based supportive housing projects were supposed to replace them, but didn’t, said Mr. Sacharko. This resulted in many mentally impaired people becoming homeless.

Local nonprofit agencies like New Hope Housing saw a dire need to provide housing to all homeless people, including the mentally impaired. According to Sacharko, a large part of ending homelessness is providing food for the residents of nonprofit housing.

Once every month, the Marymount Ministry team and student volunteers cook for, and serve meals to, the residents. Marymount’s inaugural trip to the house for the 2016-17 school year, which the ministry team organized, was held on September 22nd.

Amidst the noises of banging the chicken to make cutlets for the chicken cordon bleu and crunching the pretzels for the butterscotch-pretzel bars, there was an air of camaraderie and teamwork amongst the eight Marymount students and trip coordinator. “Tonight’s menu is Chicken Cordon Bleu, Caesar salad, and butterscotch-pretzel bars,” said Ashton Mallon, the Marymount Ministries’ trip coordinator. 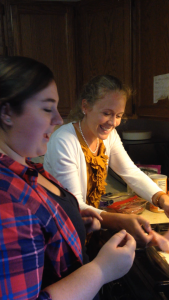 From left to right: Sarah Hall and Ashton Mallon

Raising her voice above the din of the banging and crunching, Ms. Mallon said, “this program started because one of the most important things to me is teaching students and adults that there’s just as much needed right around you. Because it’s your own backyard.”

The oven beeped as Ms. Mallon pressed the buttons to set the oven temperature to 350 degrees. “It’s easy for us to go to foreign countries and have an understanding of poverty in Third World countries. I wonder if we do a disservice to going foreign, because everyone signs up for that one first. We have all this need right here,” said Mallon of the need she sees in the communities surrounding Marymount.

Some of the students’ experience on foreign trips influenced them to join the trip to Susan’s Place. As Marymount senior Sarah Hall helped Ms. Mallon wrap chicken around cheese and ham, she said, “I just really love doing service work and helping people. I like to go over spring break on our trips when we go to other countries and help people.” As she finished wrapping each individual piece of chicken cordon bleu, she put a toothpick in it to hold the cheese and ham in the middle of the chicken. “It’s great to just come and be able to assist people in our own backyard,” she said of the trip to Susan’s Place.

Another student had a similar sentiment. “I went to Jamaica for a week in the summer, with Heart Workcamp. I always love doing service,” said Elizabeth Kasten. Kasten was a member of “Team Chicken Cordon Bleu.” She and fellow Chicken Cordon Bleu teammate, Alyssa Daza, had just finished pounding the last chicken breast into a chicken cutlet.

Alyssa’s prior service experience also led her to sign up for the trip., “I did volunteer work with my church in Gainesville, VA. I worked with All Saints,” said Ms. Daza.

Behind Team Chicken Cordon Bleu, three students were working together on “Team Dessert.” Noelle Larino, Didi Nwokoro, and Nicole Neron teamed up to make the butterscotch-pretzel bars. They laughed as powdered sugar puffed out of the bag and into a bowl.  All students said they came on the trip because they wanted to serve.

“I did a lot of community service at home in New Jersey,” said Noelle Larino. Another of the students on “Team Dessert,” Didi Nwokoro, a Health Sciences major, said she feels called to helping people. “I love helping people because my family was involved in domestic violence and people were so helpful and nice to my mom. Just me observing that made me want to go into the field of helping other people,” Nwokoro said.

Just behind “Team Dessert,” Marymount student Chandler Jenkins and this story’s reporter were working on “Team Salad.” “I’ve never made Caesar salad before so I could use the help,” said Chandler Jenkins to me. The two of us cut romaine lettuce into small strips.

“I did a lot of community service and went around DC feeding the homeless. It felt good to go back to doing something like that,” said Chandler, of finding a service opportunity at Marymount. Chandler said he first started serving other people while attending a faith-based high school. He said he had been looking for an opportunity to serve at Marymount, so when he heard about the trip to Susan’s Place, he wanted to check it out.

The oven timer sounded, announcing that the chicken cordon bleu was finished baking. A Susan’s Place resident passed through the kitchen and walked down the stairs to the basement, seemingly unaware of the work being done on his behalf. And that is okay with the students and the trip coordinator.

They are not looking for any acknowledgement. Part of why they came on this trip is as an expression of faith. “It does seem that most people who come to do service at least have a relationship with God,” said Ms. Mallon.

“One year we had a Muslim student come on the trip to Jamaica. It was beautiful to learn about each other’s faith,” said Ms. Mallon of the interfaith service experience.

“I think even understanding the dignity of the human person, the importance to treat everybody well, that seems to be a very faith-based understanding,” said Ms. Mallon. 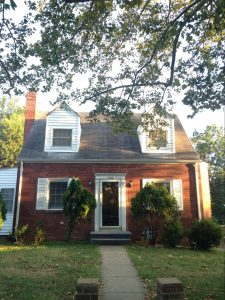 Susan’s Place is a type of Permanent Supportive Housing

The dignity of people experiencing homelessness is foremost in the ideals espoused by New Hope Housing, the nonprofit agency that operates Susan’s Place. According Mr. Sacharko, New Hope Housing is very careful about labeling people as homeless. “The ‘homeless’ don’t exist. A person experiences homelessness,” said Mr. Sacharko. He said that many people tend to look upon people who experience homelessness with disgust. “But that one person who smiles at you and engages with you, treats you like a person, can mean the difference,” he said.

That’s why he said that volunteers like the Marymount students who go to Susan’s Place to cook and serve are very important. Sacharko has had a long personal history of volunteering and serving people who experience homelessness. Over the past 15 years, he has served in the service-oriented fraternity Alpha Chi Omega, AmeriCorps, received his Master’s degree in Public Administration with a focus in nonprofit management, worked for another housing nonprofit called A-SPAN, and now works for New Hope Housing.

Sacharko is passionate about ending the condition of homelessness. “When we say that we are working to end homelessness and people give us a weird look, we really mean it. Because the individuals that we encounter that are homeless, we can end that experience by getting them into housing. And people who are at risk of becoming homeless we can prevent it from happening. Last year New Hope Housing ended homelessness for 400 people.” According to a New Hope Housing pamphlet, in 2015 alone the agency served 1,567 individuals, including more than 300 children, in one or more of its programs.

The New Hope Housing vision is “a home and bright future for every man, woman and child in our community,” as stated on its website at newhopehousing.org. The organization operates 12 housing programs, including five shelters, two transitional and rapid rehousing programs, and five Permanent Supportive Housing (PSH) programs. Susan’s Place is one of the PSH programs.

According to Sami Smyth, New Hope Housing volunteer coordinator, to be eligible for PSH, a person must have experienced homelessness for either one year or five times in four years and have a mental or physical disability. There are six residents at Susan’s Place.

One of the current Susan’s Place residents has been a New Hope Housing client for years. He is a private person and asked that we call him by an alias, “Sam.” Sam is not able to live on his own at this time. He has been diagnosed with Schizophrenia and has a history of substance abuse. According to Latasha Younger, Residential Coordinator, Permament Supportive Housing for Single Adults, Sam takes pride in Susan’s Place. “Sometimes he cuts the grass, helps with the cleaning around the house, and is willing to move/lift heavy items for staff so that the inside of the house could be organized or have that home feeling,” said Ms. Younger. He also has a garden in the back yard. “If he is lucky, he uses the vegetables from the garden to cook meals. Sometimes the rabbits in the back yard beat him to it,” said Younger. According to Ms. Younger, all of these actions make Sam feel more at home. 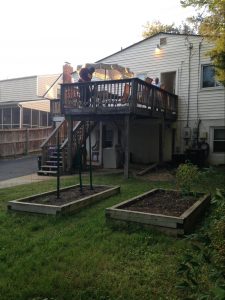 The garden at Susan’s Place

Making the residents feel at home is very important to New Hope Housing. According to Jan-Michael Sacharko, each resident gets his or her own room key. This provides a sense of ownership, but also a sense of responsibility. Each resident is required to pay 30 percent of his or her income to New Hope Housing. Housing costs are the most expensive cost of the agency, said Sacharko. Housing and Urban Development (HUD) pays up to 75% of housing and some of the case management. “On average, if we have a program that’s funded by HUD, The other 25% has to come from other organizations, from volunteers,” he said.

HUD does not pay for food. According to Sacharko, “everything starts with food. Do you realize that when you’re hungry you can do nothing? Except think about food. It’s not enough that you have a meal right now because by your second bite or your third you’re thinking, ‘where’s my next meal coming from?’” So Marymount and its student volunteers fill a great need. “I’m glad Marymount reached out to us because I think it’s worthwhile,” said Mr. Sacharko.

Marymount’s next trip to Susan’s Place may be during spring semester. If interested, contact Ashton Mallon at amallon@marymount.edu. is Students on Thursday, November 10th at 5:00 p.m. Anyone wanting to come join fellow students for a great cooking lesson, to hang out with old friends, make some new ones, or just get a good feeling can meet in front of the Lodge at 4:45 and take a short van-ride to the house.

“We haven’t ended homelessness yet in this country, or in this world and other people will experience it, but it means that we can end it,” said Mr. Sacharko.

Marymount students are doing their part to end homelessness, one meal at a time.