Having a broken brake light is the most common reason to be pulled over. Every light we fix has the potential to fend off a frightening encounter with the police, keep ticket money in a working person’s pocket, or even save a life.

Tickets are not scaled to income, so they can be extra painful to someone who doesn’t earn much. People who are unable to pay can have their license suspended, which leads to a loss of income or another traffic stop… which leads to another ticket… and on and on.

Car with one brake light out and one red one.

The Washington Post reports that there were over 100 fatal traffic stops in 2015.

State institutions like the police were created to protect the interests of the rich. They target people of color, poor people, and disabled people in order to protect property and serve the rich.

Capitalism destroys people so that the wealthy make a profit.

Capitalism says we have no rights in our workplaces, and that we are nothing but serfs to our corporate bosses.

Capitalism is the opposite of freedom.

Socialists want to restructure the world so we value people over profits. This means taking power away from big banks, corporations, and corrupt politicians, and putting it back in the hands of the People.

Our demands are simple: we only want the world.

But change the cuff by getting rid of NRA. 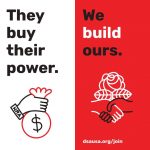 What is the DSA?

Democratic Socialists of America is the largest socialist organization in America, with over 30,000 members. We have chapters in 48 states, which focus on expanding access to healthcare, stopping evictions, reforming our criminal justice system, and abolishing prisons. DSA is a big-tent organization, which means we have a lot of members with different ideas who don’t always agree. It also means that everyone is welcome. If you want to dismantle the police state, help out your neighbors, or just come to a happy hour, we’d love to have you.

What is the NOVA Branch?

Branches are the roots that find cracks in the systems of oppression that keep impeding our liberation. The NOVA branch, founded in June 2017, was the first to form within the Metro D.C. DSA. Membership is open to anyone living, working, or interested in the local issues that effect NOVA residents. Rooted in every community, branches are meant to connect DSA members to the local issues where the greatest gains can be made. In doing this, issues like racial oppression, gender inequality, and tenant right’s can be attacked by the people they directly affect.

To connect with the NOVA Branch find us on:

Northern Virginia DSA is committed to addressing state repression wherever it occurs, and this means offering direct aid to victims of injustice. As capitalism brings forth greater and more frequent attacks against working people, we must increase our support for each other in order to defend our communities. We must break the cycle of predatory policing that seeks to kick people when they’re down and even threatens our very lives. We are here showing that socialists will not stand by as the state targets marginalized people. Solidarity forever.