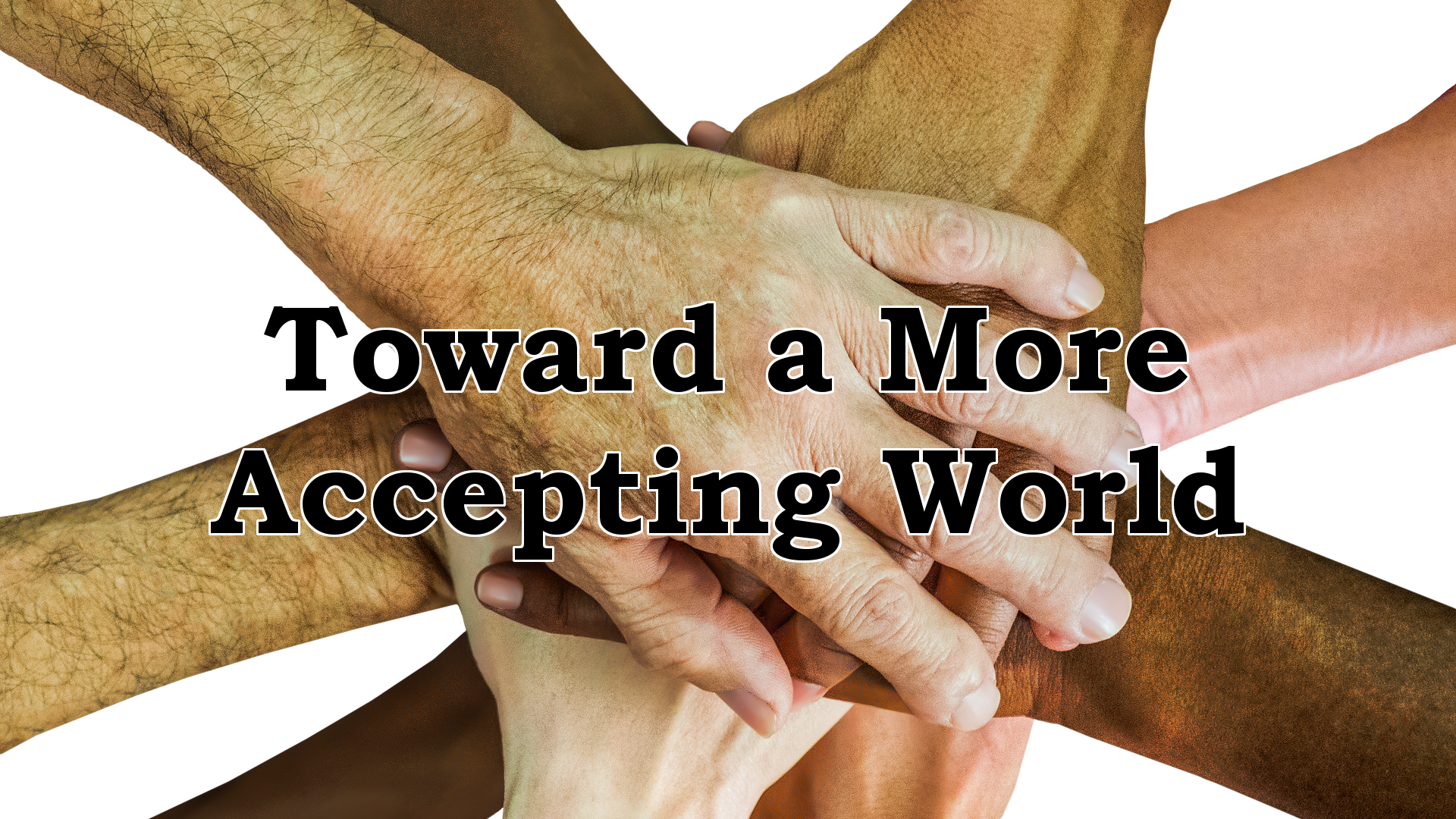 Toward a More Accepting World: Examining How Diversity is Addressed in the Media

Diversity has become one of the biggest topics, if not the biggest topic, of the second decade of the 21st century. From the Ferguson unrest in 2014 and the subsequent “Black Lives Matter” movement, to the landmark Supreme Court decision in 2015 legalizing same-sex marriage, to an enormous increase in the visibility of transgendered persons and an accompanying radical shift in the way we understand gender as a concept, to illegal immigration becoming a central issue of American politics, to a new wave of feminism, it seems that diversity, in some form, is being discussed almost constantly. Agenda-setting in the media has likely played a significant role in making the issue of diversity such a central element of the current public discourse, especially regarding LGBT rights, which became a political issue long before the aforementioned 2015 Supreme Court decision at least in part because of LGBT persons becoming increasingly visible in the media.

This paper will conduct a textual analysis of two media texts which both have diversity as a central theme. The first is an ad originally aired by the Coca-Cola Company during the 2014 Super Bowl, and recently re-aired during the 2017 Super Bowl (Organ, 2018), which celebrates diversity in American culture. The second is a National Geographic article examining challenges faced by diverse communities, and solutions currently being developed.

The first text, Coca-Cola’s 2014 Super Bowl ad, features a rendition of the first verse of “America the Beautiful” sung in several languages, namely “Spanish, Hindi, English, Tagalog, Mandarin, Hebrew, Arabic, Keres, and Senegalese-French” (Organ, 2017). The video accompanying the song is a series of short (about 1.3 seconds each, on average) shots depicting people of many different ethnicities—all, presumably, American—engaged in a wide variety of activities, including surfing, street dancing, having a family dinner, rollerskating, and many others. Coca-Cola or its logo is present in several, though not all, of the clips. The video ends with the Coca-Cola “contour bottle” logo and the tagline “#AmericaIsBeautiful”.

Diversity is not the only theme present in this ad, though it is the primary one. The use of “America the Beautiful” introduces patriotism as another major theme, and all the scenes depicted feature people celebrating, relaxing, or otherwise engaged in enjoyable activities; thus, happiness is a third major theme. The ad is constructed around the association principle. While Coca-Cola, being simply a sweet carbonated soft drink, has nothing in particular to do with diversity, patriotism, or happiness, the Coca-Cola Company uses ads like these to connect itself with these ideals in order to create a positive image of itself in the public consciousness.

The ad begins with arguably one of the most quintessentially iconic figures of America: the cowboy. The very first shot of the ad depicts a Caucasian man wearing a cowboy hat riding a horse through the wilderness, with the first line of “America the Beautiful” sung in English over the video. Starting with this familiar image conveys to the viewer the theme of American patriotism. After the first line of the song, however, the next line is sung in Spanish, and the scene switches to two Latina girls in a movie theater, and then onto other scenes and languages as described in the previous section. The lack of any emphasis on one particular scene—each only lasts a few seconds—and especially the multilingual rendition of “America the Beautiful” convey to the viewer that every scene shown is equally “American” in its own right, and that the fact that there are so many ways to be “American” is something to be celebrated.

Overall, this text presents diversity in a unilaterally positive light, as something to be embraced and encouraged. It presents the product, Coca-Cola, as something everyone has in common and that all can enjoy regardless of background or circumstance.

The primary objective of this ad—aside from selling Coca-Cola, of course—is to re-frame what it means to be American. One of the most iconic images of “being American” is, as mentioned previously, the cowboy—specifically a white male cowboy, and while the text nods to that, it seeks to broaden our understanding of the phenomenon of “Americanism” to all people from all walks of life.

The Coca-Cola Company is clearly planting a flag on what it believes will eventually be “the right side of history”, and given the trends mentioned in the introduction to this paper, they’re likely correct about which side that will be. The decision to re-air the ad three years later despite the backlash that resulted after the first airing (Poniewozik, 2014) significantly reinforces this position. It is possible, however, that the backlash was anticipated and used as part of a viral marketing strategy, on the theory that “there is no such thing as bad press”. The buzz likely drew more people to see the ad than otherwise would have, including myself.

The Coca-Cola Company’s celebration of American diversity is undoubtedly positive. It is important that those from minority backgrounds living in the United States not feel that not being white and male—or, for that matter, a cowboy—makes them somehow less American. One should not lose sight, however, of the true and ultimate objective of the ad: to sell Coca-Cola, and present the Coca-Cola Company as a champion for diversity. Coca-Cola is a powerful brand, and that power gives the company the flexibility to take some risks like this one, but it must be remembered that the Coca-Cola Company’s number-one priority is and always will be its bottom line.

One way to engage with this text would be to conduct survey research on reactions to it, with an eye towards testing the minimal-effects model and the theory of selective retention. Participants could answer some questions about their feelings toward diversity and multiculturalism in America, then watch the ad, then fill out a similar follow-up survey testing immediate reactions, and another some time later to test retention.

Another method of engaging would be to use this video as inspiration for another project, such as another video, a poster, or some other form of media, that would also celebrate diversity.

National Geographic Article “The Things That Divide Us”

This article, from the April 2018 issue of National Geographic—subtitled “The Race Issue”—discusses some of the science behind the human tendency to tribalize, or align with groups, especially in opposition to other groups who are seen as different. This human “groupishness,” as the article calls it, is a major source of racial, ethnic, and other tensions both domestically and internationally. The article also discusses some of the ways this research is being applied in order to reduce tensions and minimize the effect unconscious biases have on human decision-making.

“The Things That Divide Us” isn’t directly focused on diversity, but rather at the root cause of why diversity is a topic of so much discussion at all: the human tendency to identify as part of a group. The article is partially a report of scientific studies in group psychology and partially a human-interest story. These two elements complement each other, with the human-interest element both showing why the science is necessary and illustrating the fruits of the scientists’ labor thus far.

While much of the American discourse on diversity is understandably focused on diversity within the United States, “The Things That Divide Us” takes a more global view of the issue, with its main human-interest story based in Nigeria. The article uses interpretive journalism to explain that group tensions are a worldwide issue, not just an American—or, for that matter, Nigerian—one.

The article also makes use of photojournalism to tell its story, using pictures of a Unite the Right rally and refugee children struggling for food to illustrate the problems caused by group tensions, and pictures of oppressors reconciling with the oppressed to show that there is hope for peaceful solutions.

“The Things That Divide Us” doesn’t flinch from presenting efforts to overcome our innate prejudices as daunting, but also points out that there are real results coming from efforts to approach the problem scientifically.

As mentioned in the previous section, this article has a highly scientific bent to it, but incorporates human-interest storytelling as well. Because the article presents the issue of groupishness as a natural phenomenon, it’s less likely to put readers on the defensive, and encourages readers to think about what groups they might align themselves with.

It also presents real, concrete solutions with demonstrable efficacy, and thus real hope for the future. American readers concerned about police in the wake of the Michael Brown shooting in Ferguson and the subsequent civil unrest will likely be encouraged by the article’s discussion of the Counter-Bias Training Simulator being tested at Washington State University.

Finally, the article will likely open the eyes of many American readers to the struggles those throughout the world face when dealing with issues of diversity, as it is all too easy to get caught up in domestic affairs without considering how conflicts in the United States might mirror those in other nations.

“The Things That Divide Us” carries a positive message of hope for the future. It acknowledges that the world is imperfect, but points out that humanity need not accept these imperfections, that there are ways to improve through study and effort.

If possible, a good way to engage with this material would be to seek out and take a reliable test to help identify biases, then research techniques for combating the identified biases and put them into practice in daily life.

Both texts examined in this paper treated diversity as positive, but did so in different ways. The Coca-Cola ad engaged with diversity as something to be celebrated and rejoiced in, and was concerned only with diversity within the United States. “The Things That Divide Us”, unlike the Coca-Cola ad, acknowledged and directly addressed the struggles that arise when members of different groups live together, but presented these struggles as obstacles to overcome rather than indicators that diverse societies are doomed to failure. The article also discussed diversity as a global issue, not just an American one. Both approaches are helpful and necessary, however; the celebration of diversity presented by the Coca-Cola ad gives society an ideal to strive for, and the scientific research presented in the National Geographic article gives society the tools to do so effectively. It’s also important that the issue be addressed both domestically, as the United States confronts its own deeply-rooted systems of racial and gender inequality, and internationally, as the world becomes an ever-more-connected global neighborhood.

← What I’ve Learned
Rise and Fall: The Roman Republic as Seen Through Coriolanus and Julius Caesar →
Skip to toolbar