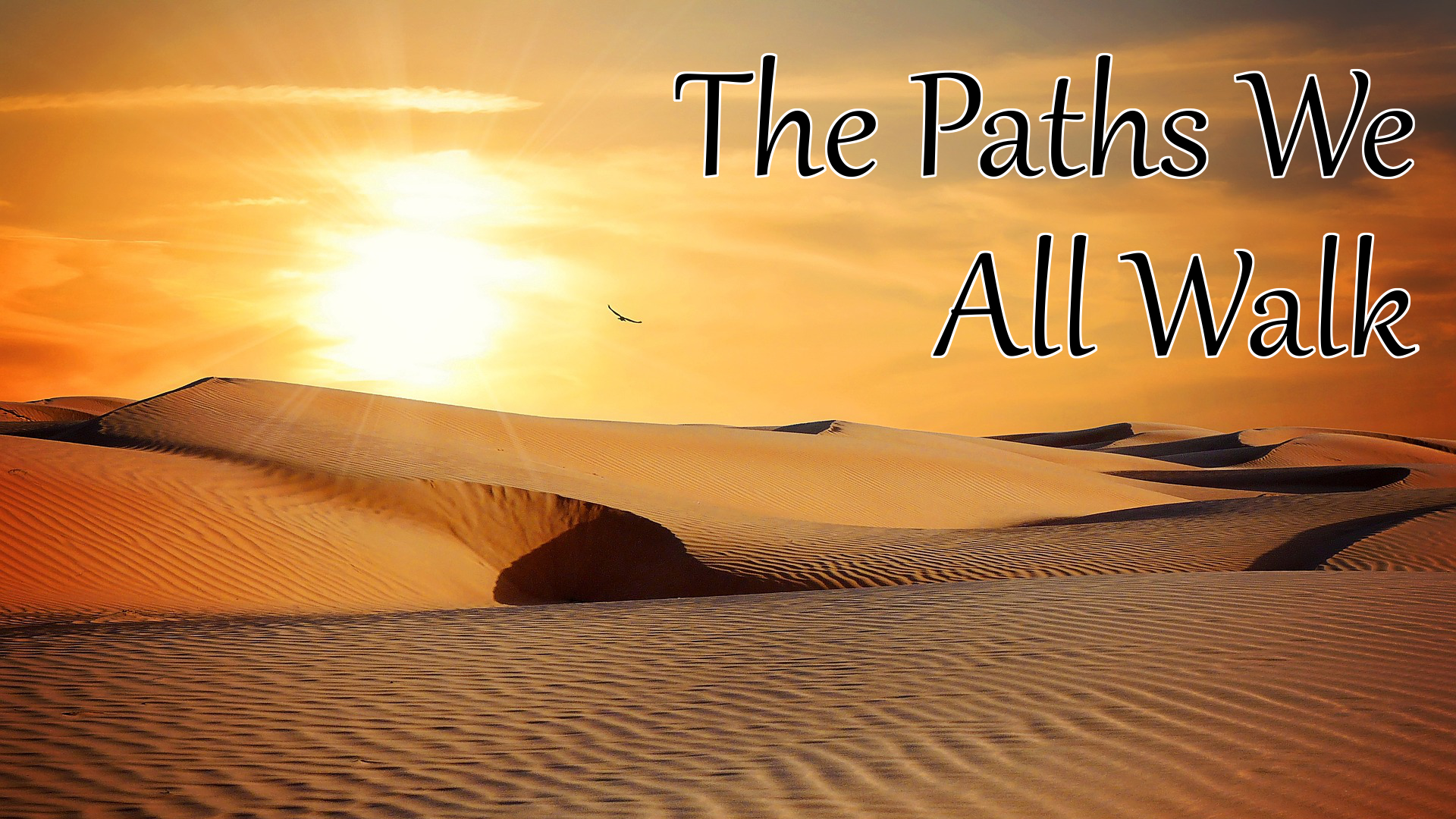 The Paths We All Walk: Journey and the Power of Universal Narrative

Journey is a independent video game created by developer thatgamecompany and published by Sony Computer Entertainment. It was initially released digitally for the PlayStation 3 in March of 2012, then, in August of that year, it was packaged with thatgamecompany’s two previous games, flOw and Flower, as a boxed collector’s edition. In July of 2015, Journey was again released digitally, this time for the PlayStation 4.

In Journey, the player controls a hooded, cloaked avatar of indeterminate gender and race. The game starts with the avatar alone in the desert, and after a brief prologue in which the player learns that the ultimate goal of their eponymous journey is an enormous split-topped mountain, the player sets off through five stages, eventually reaching their goal. This narrative is told wordlessly; indeed, even the tutorial is almost entirely wordless, using a pictographic representation of the game controller to instruct the player on how to control their avatar. Rather than words, the story is told in images. Tapestry-like animations at the transition points between stages give the player clues regarding what the upcoming stage will bring, and similarly-styled murals the player can discover throughout the world give further context to the setting.

Journey’s gameplay is very simple, with the player only having three actions they can make their avatar take: move, jump, and “sing”, which releases a musical chime that can activate or “charge” certain objects in the game world. Unlike many games, there are no combative actions; Journey expressly prohibits any form of aggressive play by simply not giving players any method of being aggressive. The most interesting aspect of the gameplay is the avatar’s scarf, which allows players to extend the length of their avatar’s jump, increasing mobility and opening up opportunities to explore the game world. The scarf has limited power to do this, however, based on its length, which can change over the course of the game. The player also cannot recharge the power of the scarf directly, meaning they are reliant on sources in the game world (which can be inconvenient to access) or on other players to do so.

Like its gameplay, Journey’s art direction is also quite simple, largely eschewing the complex, highly detailed textures typical of higher-profile releases. As a result, the occasional instances of greater visual complexity are more prominent by contrast. I’ve already mentioned the first of these instances: the murals and tapestry animations. The avatar’s scarf, too, is intricately patterned, echoing the similarly-patterned “cloth creatures” found throughout the game world.

As is the case with many games made in the Internet Age, Journey includes a multiplayer component. Journey’s take on multiplayer, however, is quite unique. Only two players can interact at a time, randomly chosen from whoever happens to be occupying the same area of the game at a given time. Players have no way to choose who they’ll be paired with. This, combined with the fact that players are meant to cooperate to reach their mutual goal, which would normally mean trolls would abound, but the game neatly sidesteps this issue by, as mentioned earlier, not giving players any way to take aggressive action. The worst thing any player can do is simply not help their partner, and the obstacles the game presents are designed such that while they are easier to overcome with assistance, it is always possible to do so alone. The other unique aspect of Journey’s multiplayer is how it limits communication between players. The game does not support voice chat, and since the game doesn’t tell players who they’re paired with until after they finish, players have no way to set up voice chat through any other method. The only way players can communicate is to make their avatars “sing” to each other.

Throughout every design choice in Journey, two related themes are present: accessibility and universality. It’s a casual game, meant for nearly anyone to be able to play, and anyone who does will likely relate to the narrative equally well. This is no coincidence; the developers cite Joseph Campbell’s monomyth—often referred to as the “hero’s journey”—as a primary influence on the game’s story (Thatgamecompany, 2012). As the monomyth by definition transcends cultural boundaries, its deliberate use by the developers as a guide for how to construct the game’s story strongly suggests that they intended Journey’s narrative to be as universal as possible.

As I mentioned at the beginning of the description, the player’s avatar is of indeterminate race and gender; thus, minority representation becomes a non-issue. For example, being male myself, when I play the game, I imagine my avatar as male, but according to the developers, female players tend to refer to the avatar as female (Thatgamecompany, 2012).

The simplicity of the controls means there is little if any barrier to entry for those unfamiliar with video games. This is especially apparent in contrast to the fast-paced shooter games that constitute a substantial portion of the higher-profile releases in the games industry. Shooter games have sets of complex control conventions which, while well-known and intuitive to veteran gamers, would likely take a newcomer significant time to adapt to. Journey’s simple combination of “move, jump, sing” is significantly easier to grasp.

The complete lack of language in the game’s narrative also contributes to Journey’s accessibility and universality. By telling the story through visuals rather than words, the developers bypassed any need for potentially flawed translation and localization; everyone who plays the game experiences the same story, told the same way. This becomes even more apparent when one considers Journey’s unique approach to multiplayer, one that is again devoid of verbal communication. Cultural and language barriers simply don’t exist in the context of Journey’s multiplayer. Regardless of whether one’s partner lives on the other side of town, or the other side of the world, the game experience is the same; it’s not the players’ cultures or origins that matter, only their willingness to help each other.

We live in an increasingly global society, and every society needs common narratives. By dint of production capacity and marketing power, the current source of most of our common narratives is Hollywood. A good deal of the controversy surrounding current popular fictional narratives centers on the overabundance of white male protagonists and the near-ubiquitous presence of American cultural values in these media. Storytellers have for some time now been attempting to remedy this situation through more diverse casting (literal or metaphorical, depending on the medium) and by drawing on non-western cultural influences.

Media that seek to bypass cultural, ethnic, and other boundaries will become increasingly important as human culture as a whole becomes more interconnected and globalized. I believe Journey‘s “universalist” approach to narrative is ahead of its time, and that we will likely see more efforts to tell stories in ways that are universally relatable regardless of a person’s background.

I also believe that the interactive medium of video games is uniquely suited to universalist storytelling because of games’ interactivity. Players feel like they are part of a game’s story, especially when they feel they can identify with their avatar. I don’t believe a similarly sparse, wordless narrative would have worked nearly as well in a film, because someone playing a game will be inherently more emotionally invested in the experience than someone watching a film. Films often make up the difference with strong writing and characterization, but these would automatically decrease the universality of the narrative.

One good way to engage with this material would be to learn more about the monomyth theory and about other theories in comparative mythology. We should ask ourselves whether there are other universal narratives that could be explored in the same way Journey explores the hero’s journey narrative. One could also write their own short story following the hero’s journey structure, and discuss the importance of shared cultural narratives with friends, family, and colleagues.

As a way to engage with the game specifically, one could encourage others to try the game, then discuss it afterwards, comparing experiences and emotional responses.