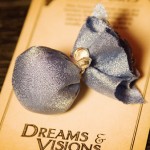 Gris-Gris are the objects used in Voodoo to provoke magic and the act itself. New Orleans has always had a stronger practice of gris-gris than other places associated with Voodoo due to the prominent African figures in the earliest days. There are many different types of gris-gris, but the most common are broken into four categories:

Love and Romance: the most  common form of gris-gris where objects and acts are used to attract a lover, keep a lover, force a breakup between others and similar such acts of the heart.

Power and Domination: which is used to gain an advantage over a competitor. It is popular with politicians, lawyers, and athletes

Luck and Finance: which may be used in very general ways but is most closely associated with gamblers. It is also used by persons looking for work or trying to get a raise.

Uncrossing: which is the act of undoing something else which has been done. Most frequently it is used to undo a hex, or gris-gris. This may also be associated with healing. 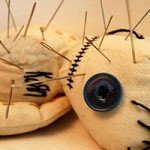 Voodoo dolls are a form of gris-gris that is used as a ritualized form of invoking the spirits or fate, to act in a defined way towards a targeted person. The doll can be used for love, power and domination, luck, uncrossing, and harm. Contrary to popular belief the doll does not act as direct line for manipulating another person but acts as a representation of the person used to appeal to the Voodoo Spirits. The Voodoo pins are used to attach something to the doll to represent the person who is being targeted.

In Voodoo, the priestess (Queen) or priest (Doctor), serves the spirits. The practice of gris-gris magic is a petition to the spirits. There are however certain spirits that can be coerced, controlled or bribed and certain persons who manipulate them in such a way. In Voodoo the concepts of white magic, or black magic have no meaning. When evil is manifest, its color is red. When a Voodoo doll is used for evil or harm, the practitioner is engaging in evil witchcraft, which is counter to, and proscribed by, actual Voodoo.  Such intentions, if known, are normally censured and interdicted by a Queen or Doctor.