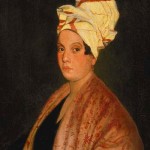 Marie Catherine Laveau was born a free woman of color in New Orleans in 1801. Her parents were two free people of mulatto descent; making her part Creole, Caucasian, and Indian. She has been described as beautiful, statuesque, with curly black hair, reddish skin and Caucasian features. In 1819 Marie married Jacques Paris, who was of Haitian descent. Not long after the marriage, her husband disappeared. It is not known if he dies or returned to Saint Dominique but his death certificate was not filed until years later without a cause. It was because of his mysterious absence that Marie began calling herself the Widow Paris. 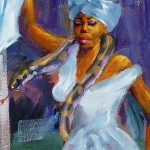 With out a husband and financial stability, she became employed as a hair dresser to the wives of prominent community figures. This was a big stepping stone to her rise as a prominent Voodoo priestess “for the women confessed to Marie their most intimate secrets and fears about their husbands, their lovers, their estates, their husbands’ mistresses, their business affairs, and their fears of insanity and of anyone discovering a trace of Negro blood in their ancestry.” These secrets she used to her advantage through fear and blackmail. Around the 1820’s she began a placate relationship with Louis Christophe Dominick Duminy de Glapion with whom she bore between seven and fifteen more children. The number of children varies through sources however only two lived to maturity. Her most notable child is Marie Laveau II who succeeded her mother as a voodoo priestess. In 1853 she worked as a nurse and spiritual healer during the Yellow Fever epidemic. Word spread about her healing abilities and she became rich from selling gris-gris. Rising as a prominent healer Marie quit her job as a hair dresser to focus on her talents as a Voodoo Priestess.

In 1869, at the age of 70, Marie gave her last performance as a voodoo queen. She continued to work with those in need until her death in 1881. According to “Voodoo in New Orleans” by Robert Tallant, The Daily Picayune, a New Orleans newspaper, announced that Marie Laveau had died peacefully in her home. However people had claimed to have seen her in town after her supposed death. Marie is believed to have been buried in plot 347, the Glapion family crypt, in Saint Louis Cemetry No.1 in New Orleans.