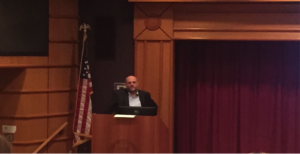 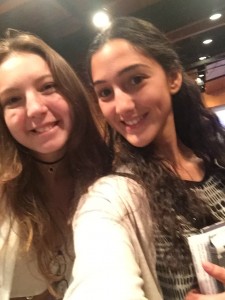 Justin Kenny graduated from Marymount University in mass media communication and English major in 1996. He earned two Emmy Awards while working as an editor for PBS News Hour in 2012 and 2015. Also, Kenny won a Peabody Award for “Desperate Journey,” which his series on the European refugee crisis. Kenny was sports editor of the student newspaper, The Banner, and covered sports for The University Reporter when he was in Marymount. Some of Kenny’s works are documentary films about Syria, Yemen, and Afghanistan. Recently, he launched his own production company called Small Footprint Films. At the talk, Kenny was talking about his job and I really like when he said, “journalist should know the risk of their job” because he admitted the truth. I learned that shooting is not easy and journalists have to deal with artistic things while shooting. Valuable skills for journalists are speaking foreign languages and writing. Kenny suggested training ourselves to write fast because it helps in all fields. Also, he talked a bit about the writing and filming process and how it is hard for journalists. Kenny said, “eight minutes story takes about eight months of publication.” Kenny was giving the audience advice that he believes in. Some of the advice were taking control of the future, always be prepared, and learn from your mistake. The most interesting part of the lecture is when Kenny started talking about the beginning of his educational life and how Marymount supported him. At the end of the talk, one of Kenny’s professors came up and told the audience that everything Kenny’s achieved was through hard word and all his professors and friends agree with that as well. The last part was very emotional and prideful.