The picture of the Jewish monument  (https://drive.google.com/file/d/1aH1bkMUxodjwxUf_KONCKgFZ7EEIgMlx/view?usp=sharing) says that Jewish people lived in the Netherlands during the war. Modern Jews are named after and also descended from the southern Israelite Kindom of Judah. They somehow ended up in Groningen, so this is a sign of globalisation.

The picture of the music dome in itself doesn’t look like globalisation on the first glance. 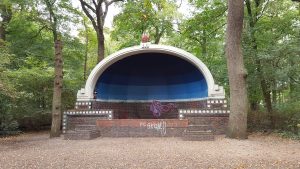 But when you look at the history of the dome, you can discover that the original dome (before it was turned to a cement one), was built by the English soldiers that camped in Groningen during and after WW1. (https://www.wereldoorlog1418.nl/englishcamp/part-10.html). This concept was used in America as well when the convention centre in Washington D.C. was renovated in 1997. The plans were cancelled in the end, but the music dome was build elsewhere later. (https://www.bizjournals.com/washington/stories/1997/04/14/story4.html)

The process of globalisation is a very complex one and in some ways, it may happen by chance. But the foundation is that new cultures and people visit foreign places and leave a fingerprint from their culture. People come across foreign cultures more often than not when travelling. This inspires new idea’s and thus some parts of that culture will be copied in other places and like that it became globalized.

At first, the photo of the artwork in Ballston surprised me, but after the background check. That wasn’t the case anymore, because that kind of artwork is seen more around the world, then it impressed me.
The Ballston metro station surprised me too. But when hearing about the fact that it was modelled after the London underground rail station, that made sense too.
The photo of the Montessori flag impressed me because you have to know what exactly Montessori is and that it originated in Italy. It’s not as obvious as the other forms of globalisation in our essay.
I feel most connected to the global village because I love to travel and want to see all kinds of different cultures. I feel like in every culture and place, there is always something familiar, but that I can contribute with my knowledge and culture too. I think it’s amazing how everyone can learn from each other in the global village and that’s where I feel most at home.

I shared my own perspective by looking for educational and environmental globalisation because I’m really interested in both. Wanda shared her perspective by looking at globalisation having to do with wars and culture since she is interested in that. Victoria shared her input on business and environment by choosing the Nature Conservancy as one of the pictures, something that I wouldn’t have thought of. When creating the final assay, we did a video call so everyone could give input on which pictures they liked and why. All people checked the pictures and their descriptions in the end and in this way we could come up with a lot of different reasons for why our pictures were good.

← #5 The intercultural paradox
BLOG: SEEING GLOBALIZATION IN YOUR COMMUNITY →