If you’ve never watched Jane the Virgin it is about a a hard-working, religious young woman, Jane, who vows to remain pure until marriage. Her vow is complicated when a doctor mistakenly artificially inseminates her during a checkup. From the beginning this show has illustrated very modern and multicultural views on religion. However there is one specific episode I believe adds on to a blog post that was created a few weeks ago. Chapter 51 (season 3 episode 7) deals with a numerous amount of storylines but I want to point out the religious take of it. 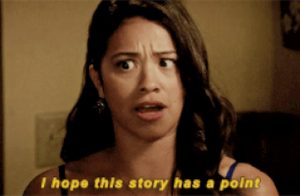 It all begins when Jane’s grandma Alba, who is super religious points out that Jane has not been to Mass for a while and explains to Jane that her son Mateo might not “have god in his life”. Alba also states that because of Jane’s actions, she is being a bad catholic and a bad mother which ingrains guilt into Jane. Despite the hesitation of her son’s father, she takes Mateo anyways but soon realizes he is way too young to sit in Mass. When her grandma asks her why she is avoiding church she makes up about a million and one excuses. However as the episode progresses Jane finally acknowledges that the origin of her guilt stems from nearly losing her husband Michael (I know it’s confusing but it makes sense if you watch the entire series) 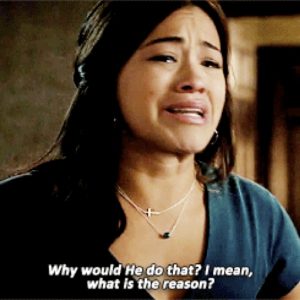 She’s furious with God and terrified by the possibility of His absence. For me personally I have never felt as though she was angry with Him, I believe she is scared and confused, resulting in doubt. At the end of the episode Jane goes to church to makes a confession. She asks the nun a question that I believe is universal regardless of anyone’s religion. How could He let this happen. Whenever something terrible happens we all hear people say God makes everything happen for a reason/ God has a plan. It is things like this that can make a person wonder  how an almighty power could allow the terrible things which happen in the world.

9 thoughts on “Theology in “Jane in the Virgin” (Lauryn Martinez, April 20th-April 26th)”