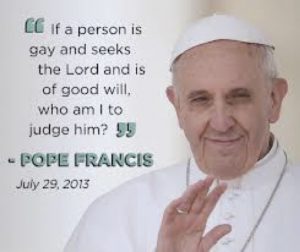 As a person who has been raised by Catholic parents, I have been exposed to many situations in which Christians disagree with certain issues. An issue that is constantly brought up amongst Christians is their hatred for those who are homosexual. I found the fact that Christians are opposed to homosexuals to be a strange concept due to the fact that the main argument of Christians is to love and care for you brothers and sisters, but yet they reject homosexuals? Most Christians say that being homosexual is wrong, unjust, and sinful. One tactic that I have seen from those who disagree with what Christians are trying to label homosexuals as is to use the bible to prove how unjust and judgmental they are. One of my favorite quotes is a short verse, “There is only one Lawgiver and Judge, the one who is able to save and destroy. But you—who are you to judge your neighbor?” (James 4:12). However, not every Christian is as opposed to homosexuality as some others are, they have accepted them for who they truly are.
Last year, I remember going to church and hearing several people talking about what Pope Francis has recently said in regards to how Christians have been treating homosexuals and I found an article on CNN which covered what Pope Francis said in regards to the topic of homosexuals/LGBT. Pope Francis stated that all Christians should ask for forgiveness to those whom are gay. Some Catholics found that the statement that Pope Francis gave was a breakthrough in regards to the church’s views on homosexuality.
Pope Francis directly discussed the mistreatment of homosexuals and how much the Church is to blame for their mistreatment, “The Church must ask forgiveness for not behaving many times — when I say the Church, I mean Christians! The Church is holy, we are sinners!” Pope Francis also brought up the question “Who am I to judge gay people.” This is a question that all Christians should think about before trying to judge others for who they choose to love. Pope Francis address the conflict that Christians have created and suggested that the church as a whole should ask for forgiveness for the unjust treatment, which I completely agree with.
Discussion Questions
How do you view the Church’s treatment of homosexuals? Do you believe that they owe the LGBT community an apology? What are your views on how the church should treat the LBGT community?