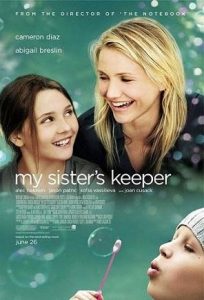 One movie that I loved to watch was, My Sister’s Keeper. This movie was about a small family that had a sick daughter. The daughter, Kate, had cancer and was dying. For the sake of their daughter’s life, the parents decided to conceive another child. Only that child was specifically created to be a donor for their daughter, Kate. Their youngest daughter, Anna, grew up being a marrow donor for Kate. When Anna got older she realized that the parents were too focused on Kate. Anna loved her sister, but she was tired of being poked with needles.

While Kate was in the hospital, the doctor informed the family that she needed another organ or she will die. They instantly volunteered Anna as the donor. Anna decided that she did not want to go through with the surgery. Her mother began to resent her for it, and it created problems within the family. For support, Anna decides to sue her parents for emancipation. She wanted to be in charge of her own body, but the question was what will happen to Kate? When her mother found out that she was going to court, the problems within the household grew. Things start to unravel and unfold. This movie shows Anna and Kate’s perspective on the situation. I attached the scene of the movie where the surgery was discussed.

Theological Issue: Throughout this movie, of course there are many religious issues that one could discuss. The one that came to my mind was accountability. In the movie Anna was basically genetically modified. She was born to keep her sister alive. She didn’t like how she was being treated as an object instead of another daughter. In church we are taught that family comes first. We are supposed to protect our brothers and sisters no matter the circumstance. If something happens to a family member, then we should be held accountable. This topic brings to my attention the story of Cain and Able. Cain killed his brother Able, and God approached him. He asked him “Where is Able your brother?” Cain replied, “Am I my brother’s keeper?” (Genesis 4:1-15). Cain refused to admit that he killed his brother. God wants us to take care of our siblings, and set an example. We are responsible for whatever they do, because they represent the Lord. Anna is Kate’s keeper in this movie. She is protecting her from death in a way. But, how much is too much?

Discussion: Is it okay for the parents to force Anna to donate to Kate? God wants us to protect our brothers and sisters, but would God understand Anna’s decision? Is it okay for Anna to choose herself, and to not donate anymore?