Growing up Catholic, I have always been taught that I am loved by a just and righteous God; a Father who has created us “in His image and likeness” with all that is good and wise (Genesis 1:26-27). Yet, as I came to realize the truth of reality and the story of Adam and Eve, it was hard to accept that my God, who is claimed to be the purest form of love and goodness, would allow humanity to experience so much evil and suffering especially in today’s world.

I recently discovered a channel on YouTube called Ascension Presents which is an evangelistic platform designed to bring faith-filled presenters to share their thoughts about theological concepts and ideas. They are a group that hope to bring their viewers’ hearts closer to Christ. Father Mike Schmitz answers one of the toughest questions that encompass Christian religion: Why does God let bad things happen? Why would a loving and all-powerful God continue to let many people suffer and experience inexplicable hardships?

To summarize part of the video, Father Mike Schmitz rejects the idea’s mindset when people automatically answer the questions mentioned above by saying “it is all part of His plans”. He states that evil doings and sufferings are, indeed, not part of His plan, that it was not His will to create so much heartbreak. He believes that humans have bought evil and hardships on ourselves since we decided to sin against God and engage in free will.

I thought he made a great point to show that when Adam and Even decided to reject God and fall into temptation, they bought sin and evil upon humanity. This concept made me realize a connection to one of our readings in “In the Beginning..” because Ratzinger points out how Adam and Eve were not in denial of God but how they doubted his covenant. Ratzinger believes what lies at the “very heart of sin lies human beings’ denial of their creatureliness…they do not want to be creatures, do not want to be subject to a standard, do not want to be dependent” on God (Ratzinger 70). God gave humans free will, the freedom to choose right and wrong, which has, in turn, bought about the evil and sin that we see today. In other words, they made the “decision not to accept the limitations of their existence”, limitations set by God to ensure a perfect relationship with Him and everlasting life in His kingdom (Ratzinger 67).

Father Mike concludes by reiterating that God does not allow bad things to happen, we, humans, has brought that upon that ourselves, we have allowed bad things and evil to happen to us. God’s will is to guide and provide strength to those who are weak and provide the greater good for humanity. The Lord declares that he “knows the plans [He] has for you, plans to prosper you and not to harm you, plans to give you hope and a future” (Jeremiah 29:11). 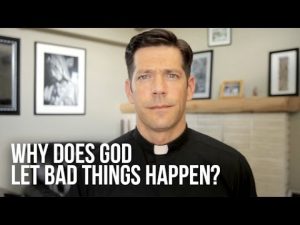 Discussion: Why do you personally think God allows suffering and evil to exist in the world? Do you agree or disagree with Father Mike? Why or why not? How do you deal with hardship and obstacles that happen in your life?