The state of Israel in general, and more specifically the city of Jerusalem has been dealing with religious controversies for a very long time. The Jewish people of Israel have had serious clashes with both the Christian and Muslim religions. These clashes had led to violence and hate crimes amongst these religions, not only in Israel but all over the world. So, it was a huge surprise to me when I came across an article about how this past Fall from September 5-11, leaders from all three faiths planned a week long interfaith house of worship. This event was hosted by the Alpert Youth Music Center, and for that week the center was called “AMEN”.

The three religions of the “book” (book of revelations), share “a passion for Jerusalem in which they will co-exist temporarily under the wings of the Almighty.” This event was integrated into Jerusalem’s yearly “Mekudeshet” (“Blessed”) festival. I found many articles about the plan of this to happen, but I didn’t find much on the outcome of the interfaith house of worship, or any proof. 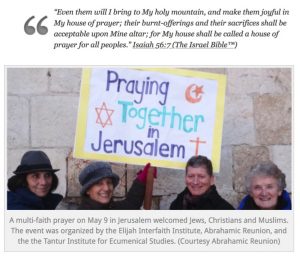 I ended up finding another article about a group that actually did meet (with proof) on May 9 in Jerusalem to hold a multi-faith prayer. There was a group of 130 Christians, Jews and Muslims, that prayed together even after being threatened. They took turns explaining their notion on what prayer is, and found all the similarities between the three faiths. Then they separated into different parts of the building to do their separate prayers, then at the end they all came together and gave a song from each tradition. One of the Jewish Rabbis attending the event explained the purpose of this meeting by stating, “It is a very simple thing. Each person prays in the presence of the other, affirming the presence of the other, indicating a willingness to live together in peace. In this sense, it was a hugely successful event.” We are currently going through hard times all over the world in regards to religions clashing, so to come across this was very interesting and refreshing, and gives hope. 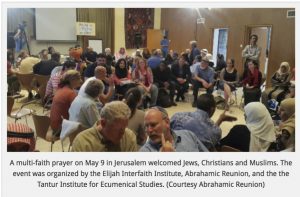 The unity and acceptance of not only the Abrahamic religions, but all religions were a major topic in “Nostra Aetate” of the Vatican II. It emphasized that it “urges all parties that, forgetting past things, they train themselves towards sincere mutual understanding and together maintain and promote social justice and moral values as well as peace and freedom for all.” The event of the union of these three religions is exactly what Christianity is all about; all humans are created in the likeness of God, and everything God created is good. So all people are created equally under God, and Christians following the Gospels must act as so, and this event right here is a great start. The end of “Nostra Aetate” follows up on this by stating “We cannot, however, call upon God the Father of all if we refuse to behave like sisters and brothers towards certain people created to the image of God. The relation of man and woman to God the Father, and their relation to their fellow human beings, are linked to such a degree that scripture says: ‘Whoever does not love, does not know God.’”

Discussion Question:
Do you think it is possible to establish such an event in America during these times of political/religious turmoil? What kind of impact would you think it would have on our nation?
Do you have any moral objections or issues with this event, or with different religions praying in conjunction in general?