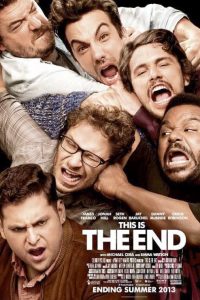 Summary: I’ve seen the movie “This Is the End” so many times. It’s a fantasy/action/comedy/religious film that starts off with a group of celebrities at a party. James Franco throws a party with his friends Jonah Hill, Seth Rogan, Jay Baruchel, Danny McBride and Craig Robinson, along with many other celebrities. All of a sudden an apocalypse of biblical proportions erupts; this causes everyone at Franco’s party to be trapped inside the home. Eventually everyone gets out and they run outside into a big hole as the world disintegrates before their eyes. More than 90% of the party members die, and the world is left with a few people and the six friends. This unexpected situation leaves the friends on the edge of getting torn apart, with the new responsibility of trying to keep each other alive.

The movie continues with the six friends trying to fight for their lives and eventually coming face to face with the devil. Towards the end, the devil comes and tries to take their lives, but as it reaches for one of the friends, a blue light/ring appears around him and lifts him up into heaven, along with his other friends, God took them one by one. 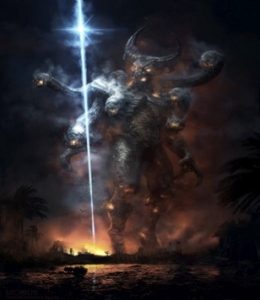 This shows that as the world was ending, and this terrible situation took place, each friend was able to focus on each other and put their differences aside which allowed them to be taken by God and enter the gates of heaven. 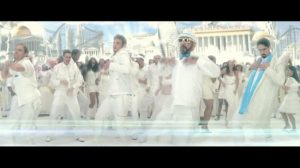 Theological Issue/Question: The theological issue is the question as to when the world is actually going to end. Although no one knows this answer except for God himself, some people wish they knew. The bible does discuss and talk about the end of the world, but there is no actual date that states the specifics and details.
Relation to class: Although we haven’t really discussed “the end of the world” in class yet, I would like to reference some scriptures from the bible that talk about the end. In 1 John 2:17 it states that “The world is passing away and so is its desire.” This describes the world will come to an end soon because it’s slowly degrading away. Also the bible states that “The one who does the will of God remains forever” (1 John 2:17). This quote is discussing one prospect of everlasting life right here on earth. “The righteous will possess the earth, and they will live forever on it” (Psalm 37:29). Although this is stated in the bible, it is not meant to be taken literally. It means that those who were good on earth will go to heaven and live there forever. These quotes explain that if you are righteous, that you will live forever on it. In the movie I don’t believe that the characters knew when the world was going to end which is why throughout the time that they were alive, they started to pray and ask God for forgiveness for any of their sins they had.

Question for discussion: If you were still alive during the time of the end of the world, how would you react? Would you ask God for forgiveness? Do you feel that God should’ve stated a date where it tells us in the bible when that time will come?

28 thoughts on ““This is The End” The end of the world (DeAndre’ Robertson, March 29th-April 5th Discussion)”