A movie that I have seen many times since its release is “Evan Almighty.” The movie is about Evan Baxter who is a newly elected Congressman that wants to change the world. Evan and his wife, Joan, are religious people that both pray to God, but for different things. Evan prays for the opportunity to become the Congressman and change the world, his wife prays for the family to become closer together.

On Evan’s first day at work he is given a prime office space and is asked to co-sponsor the Public Land Act bill (which God is not in favor of). After his first day Evan starts to experience strange events. The number 614 starts showing up everywhere (614 for Genesis 6:14), ancient tools and gopher wood are being sent to his house, God appears to him everywhere he goes, animals start following him, his beard starts growing out and even if he shaves it grows back instantly, and eight vacant lots in his neighborhood are bought under his name to have room to build the ARK. 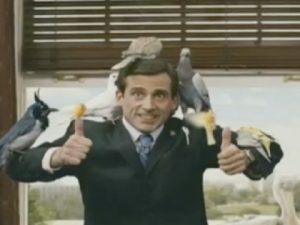 Even after these things happen, Evan still tries to deny that God is truly appearing to him and asking him to do this. After some time, though, he finally agrees to build the ARK. Evan is fired from his job as a congressman and his family moves out of the house because Evan is acting weird and Joan thinks he is going crazy. With all this extra time Evan finally starts building the ARK with the help of animals and later his family who forgives him.

Here is a link to a short clip (3 minutes) from the movie:
https://www.youtube.com/watch?v=R1QArbkQsVw

The main part in this movie is when Evan asks God to help him change the world and God gave him the chance and guidance to do just that. God’s calling to Evan led to him being able to change the world and finish the ARK to save people, animals, and stop the passing of the bill.

Throughout my lifetime, I have prayed many times to God to help me in certain situations, to gain something, or help me fight through something, etc. From these experiences, I sometimes cannot see how God is helping if at all, but sometimes I can see that God will propose an opportunity to make something better which is exactly what he did in this movie with Evan. Evan wanted to change the world and God gave him the chance with giving him supplies to build an ARK.

In our class, we had to read 1 Corinthians which discussed how people should accept and consider God’s calling. In the first chapters of 1 Corinthians, the Apostle Paul writes a letter to Corinth to help the people understand God and to keep having faith. In the beginning of the letter Paul starts by telling Corinth how God invited them to be his people and that whoever calls upon him God will give you all of his blessings, and great peace of heart and mind. (1:2-3). Later in the letter, Paul asks the people of Corinth to consider their calling from God and that God has chosen each of them for a specific reason. (1 Corinthians 1-4). With this being said the main point in 1 Corinthians is that the people of Corinth need to consider their calling from God such as Evan had to in order to reach salvation or in Evan’s case change the world.

Discussion Questions:
In today’s society if God was to answer someone’s prayer just as he did with Evan’s, how would we respond? What would God’s calling to us look like? Do you think that if a person stops praying to God they will lose their faith in him?
Have you ever experienced any callings or answers to your prayers from God? If not, why do you think this is?