One of my favorite books of all time is “Are You There God? It’s Me Margaret” by Judy Blume. This book is about a 12-year-old girl, Margaret, who has grown up without a religious affiliation because of her parent’s interfaith marriage. Her mother is Christian and her father is Jewish. When she was born her parents decided not to raise her with either religion. They wanted her to find her God on her own.

This is just a small portion of the book, but in my opinion it is the most important. The rest of the book is about Margret praying to God to help her transform into a woman and to help her know what religion she should be part of. In the end Margret start menstruating and thanks God with a prayer, officially accepting Christ into her life.

I was also raised with no religious affiliation in an interfaith household. I liked this because then there was no pressure to choose mom or dad’s religion. As a result of this though my sister and I never had a God to pray to or talk to so is it better for parents to choose a religion for their children so they have that? The theological issue is if parents should devote their children to Christianity (or any religion) from birth or if kids should have the freedom to choose. 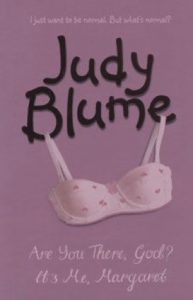 This relates to the Gospel of Mark that we read from the bible. In class we read Mark and at one point Jesus told his disciples to spread the word that everyone must be baptized (including children) he said, “whoever believes and baptized will be saved, but whoever does not believe will be condemned”. Parents of Christian faith are to do the ‘godly’ thing by raising their children Christian and baptize them.  “Train up a child in the way he should go, even when he is old he will not depart from it.” Says proverbs 22:6.

Discussion:
Should parents raise their kids with no faith and let them decide when they are older whom they choose to follow? Should children grow up with more than one religion in the household?

37 thoughts on “Growing up without religion (Zeyna Mcllvain, March 16-22)”