Here is a link to a short clip (6 minutes) from the first movie: https://www.youtube.com/watch?v=vXRrVrkFYlo

The Rapture is known as the beginning of the End Times, where the true Christians, or the “saved” people, will ascend up to Heaven to be with Jesus.  After this happens, there will be a 7 year period, called the “Tribulation”, where the first half is peaceful and it gives the “un- saved” people who did not already ascend up to Heaven, time to accept Jesus so that they too can join Him.  After the peaceful first half, this is when the “Great Tribulation” occurs, where the Antichrist comes, and people have the option to follow him or follow Jesus.  This is the last chance for the “un-saved” people to turn to Jesus and become saved.  This will not be a time of peace but rather a time of war and death, it is the end of the world as we know it, before the new heaven and the new earth are made. 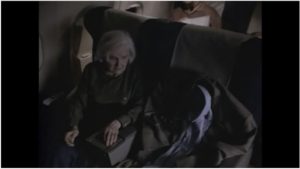 This picture is a screenshot from the clip of the movie showing the clothes of the people that had ascended up to Heaven being left behind.  This shows that at this point, material and worldly things do not matter; the only thing that matters is the soul of the Christians, and whether they have accepted Jesus to be their personal Savior.

For a class reading, we covered some verses that briefly mentioned the Rapture times. Two that are relevant for this topic are verses 30 and 31 in Matthew 24. It states, “30 “Then will appear the sign of the Son of Man in heaven. And then all the peoples of the earth [a] will mourn when they see the Son of Man coming on the clouds of heaven, with power and great glory.[b] 31 And he will send his angels with a loud trumpet call, and they will gather his elect from the four winds, from one end of the heavens to the other.”  A few verses later, in Matthew 24:44, it states that no one knows the day and hour, so we should just be ready.  The main point that comes from this verse is that there is no reason to wait to accept Jesus into your life, especially when there are reasons given as to why we should do it sooner rather than later.

Discussion Question: According to the Bible, does it matter what hour or day the End Time/ Rapture comes?  While we are told that we do not know the time, we are told what happens when the time does come.  Does this seem fair to you? Why or why not?