a journal of undergraduate nonfiction

Skepticism on Scruton: the Possibility of Photography as Representation

In his article “The Hand Camera – It’s Present Importance,” published in The American Annual of Photography and Photographic Times Almanac in 1897, Alfred Stieglitz reflected on his works created with hand cameras. Stieglitz waited for hours until certain figures or natural elements would cross his viewfinder in such a way that they harmonized the composition so it was aesthetically pleasing, such as in The Terminal (Figure 1). While Stieglitz controlled the style of the photograph and the deliberation taken in selecting the exact moment of exposure, the process he ascribed to his photography was causal, meaning that the elements of his composition exist independently in reality. It was only necessary for him to recognize them and the camera to capture them.[1] This idea that photography is merely the mechanical reproduction of an object, rather than a valued, arduously-created representation of a subject, as in painting, is a well-debated subject in the philosophy of photography. One of the most cited proponents of this idea is the philosopher Roger Scruton. In this essay, I will argue against Scruton’s argument that photographs are by definition non-representational by proposing that the subject captured in a photograph portrays the artist’s intention, which is separate from the objects depicted in the photograph. Then one can answer, can photography be a representational art?

In his argument, Scruton claims photographs lack these two abilities paintings have. Photographs are not representational nor have the ability to be aesthetically interesting in a representational nature. He argues that the only way a photograph can “represent” a subject would be to reproduce the appearance of the photographed object, which is the defining quality of the ideal photograph. In other words, due to the causal relationship between the subject and the photograph, the photograph can only hold aesthetic interest through the interest the viewer has for the subject, which in Scruton’s argument is necessarily the photographed subject. Scruton maintains that while someone can have an abstract aesthetic interest in the photograph, this interest will be contingent on its form and shape, not its representational nature. The key to Scruton’s argument is this: for an artistic medium to produce an artwork that is representational, then it must have an intentional relationship between the medium and the product. The artist, therefore, intended the subject to be depicted in such a way, not the image randomly occurred.

Additionally, Alward suggests that if the photographer took a great variety of pictures, the selection of the exact picture that would then be labeled Venus is another method of photographic representation. However, Scruton would argue that the name of the photograph is merely pointing to its subject, which in Scruton’s essay is necessarily the object, not representing it. Scruton provides the example of  a photographer taking  a photograph of a drunken man and labeling it Silenus. This method of identification arguably would cause the photograph to be fiction or representational. Yet, this act would be the same as if Scruton had pointed to a drunken man on the street and called him “Silenus.” It could be construed that by pointing and calling the man this name, the man is now a representation because he has indicated to those around him to imagine him in this way. Ultimately, the camera is pointing to the subject, not representing it. If one were to accept Silenus as being representational, then this action would open up the possibility of considering anything expressive to be representation, and thus there would be no difference between representational and non-representational art.[12] 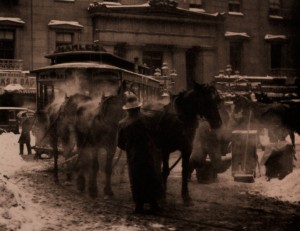 [6] Lopes, “The Aesthetics of Photographic Transparency,” 442.

Alward, Peter. “Transparent Representation: Photography and the Art of Casting.” Journal of Aesthetics and Art Criticism 70, no. 1 (2012): 9-18.

Costello, Diarmuid and Dawn Phillips. “Automatism, Causality and Realism: Foundational Problems in the Philosophy of Photography.” Philosophy Compass 4, no. 1 (2009): 1-21.