a journal of undergraduate nonfiction

Health Policy Reform: The Impact of Poverty on Obesity and Children’s Health in the US

Thousands of children are suffering from short-term and long-term chronic health issues because their parents cannot afford health insurance or medical bills. According to Jennifer Dorning, in 2014 about 34 million people in the United States had no medical. For people living in poverty, which is defined as living under $23,850 a year for a family of four, the uninsured rate was almost twenty percent (Dorning 4). Minorities are much more likely to be uninsured than their majority white counterparts. Minorities are more susceptible to having certain health issues due to genetics, but not having access to health care because they are poor makes them more prevalent. Public health practice has a huge impact on a community and there are some basic steps on how to create change in the United States to benefit those affected greatly. Everyone in the United States should have the right to an affordable health care no matter their race, ethnicity, or socioeconomic situation, and the ability to decide if they want to be insured.

From the beginning of our country’s founding, we have lived by the documents written by our Founding Fathers. This includes the “Declaration of Independence” by Thomas Jefferson which states:

that all men are created equal, that they are endowed […] with certain unalienable Rights, that among these are Life, Liberty and the pursuit of Happiness. […] it is the Right of the People to alter or to abolish it and to institute new Government […] as to them shall seem most likely to [affect] their Safety and Happiness. (Jefferson 1)

These words state that every human U.S. citizen has the right to Life and the pursuit of Happiness, which includes health; if one is not healthy can they truly be happy with their way of life at the moment? An affordable health care should be implemented to allow our fellow citizens, of different socioeconomic levels, these unalienable rights given to us since our founding. Are people healthy because they are rich, or are they rich because they are healthy? Same goes with the poor who get sick and have no means to receive an affordable health care or pay for their medical attention. Some people believe the poor do not care about their health; however, it is much more complicated than that. Many do not possess the same financial means as others to pay for their medical bills and medicine; others may have been sick so much that they have spent all their money on healthcare.

Although there are minorities insured, it is still significantly fewer people when compared to their white counterparts. About ninety percent of U.S. citizens are covered by some type of health insurance, either private or government funded (Dorning 1). In 2014, almost eight percent of non-Hispanic whites, twelve percent of blacks, nine percent of Asians, and twenty percent of people of Hispanic origin were uninsured (Dorning 4). About forty percent of workers do not have access to paid sick leave, forcing workers to go in sick and prolong their sicknesses and raise health costs. In January 2014, under the Affordable Care Act, the majority of Americans were required to have some health insurance, which caused almost nine million Americans to become insured; the majority of those who became insured after this were people of low-income, minority settings and young adults (Dorning 6). The Affordable Care Act (ACA) was implemented in 2010 by President Obama, making significant changes in the health care system up to 2014 (Dorning 6).

The majority of costs in health care come from chronic illnesses, such as obesity; these are due to “[high] hospital fees associated with repeated hospitalizations” (Dorning 3). This is because many doctors are more concerned with what is going on now rather than what will happen in the future. Medical bills in the United States are a large contributor to bankruptcy; between 2005 to 2013 eighteen to twenty-five percent of bankruptcy cases were due to medical bills (Dorning 6). The ACA also called for an expansion of the Medicaid program, which as of 2015, thirty states and Washington DC had chosen to accept. With this expansion, those who are one hundred and thirty-eight percent below the poverty line are eligible for Medicaid (Dorning 7).

Minorities living in poverty are more susceptible to having health issues and not being able to afford to have access to health care makes these issues more prevalent. There is a correlation between the duration of their life a child faces in poverty and its consequences in relation to the health problems. Children of uninsured minorities are up to ten times more likely to have unmet medical needs and are five times more likely to go more than two years without seeing a doctor (Dorning 4).  As seen in Figure 1, the effect of the percentage of a child’s life in poverty negatively affects their health. Although there is the point that an African American child has poorer health throughout all the proportion of time in poverty when compared to white children (Malat 445). Because these minorities and people living in poverty do not have an affordable health care plan, their children will grow up knowing lifelong illnesses and diseases. Their children will have poorer health compared their wealthy counterparts because their parents could not afford medical attention, medicine or treatment. By creating an affordable health care program, these children may have the opportunity to be just as healthy as those who have better opportunities than they do.

Chronic malnutrition often leads to obesity, a condition that affects a large percentage of the United States population, which masks other epidemic consequences, such as stunting: reduced growing, in both height and weight, which affects the child’s development (Iriart et al. 1069). Children who spend more time in poverty are expected to experience more health issues because of increased exposure to these conditions (Malat 443). More exposure to poverty impacts a child’s health, no matter the race, even though minorities are more likely to fall under this. The United States has one of the highest rates of chronic illnesses and one of the lowest life expectancies of most first world countries and higher income nations (Dorning 3). The people who are facing socio-economic problems have a greater chance of suffering health problems, such as obesity and stunting compared to those who do not face these problems (Iriart 1072). Overweight/obese Hispanic children have a higher prevalence of stunting compared with non-Hispanic White children; for the entire study, the prevalence of stunting was about three percent across all racial/ethnic groups, while for Hispanics this was about seven percent – this can be seen in Table 2 (Iriart et al. 1072-3). While those non-white Hispanic children suffer from the consequences of obesity and chronic malnutrition more often than their white counterparts, this is due to the lack of affordable health care in our country and the costly doctor visits.

Public health practice has a huge impact on a community, and there are ways to create reforms in the US Public Health system to benefit those affected by these problems. In “Poverty in America: How Public Health Practice can Make a Difference,” Paul Erwin talks about his experience in Tennessee. Erwin describes three aspects in approaching a change in public health practice, which includes community power through local decision making about health, educating students about poverty and health in the ‘arena,’ and increasing employment of people from these communities to reach these communities (Erwin 1570). Enhancing a community’s power in their way of life allows them to fight for the right for the government to do what they actually need them to do, not what the government wants to do (Erwin 1571). In this small town, the rates of cardiovascular and lung cancer mortality rates are higher than that of any other part of the state, yet the County Health Council (CHC) decides to focus on the dental hygiene of the young people here (Erwin 1571). The community must use its power to force the CHC to do something about the larger concerns. When Erwin talks about education, he is not strictly talking about educating the poor, which is important, but educating the “not-so-poor” about the poverty happening and what happens to them where it takes place (Erwin 1571). By taking students out into the field where poverty and its consequences are highly visible allows students to apply their knowledge and adapt what they were taught to work for the place they work in (Erwin 1571). Change is necessary for people to learn. Individual opportunity is allowing those from areas of concern to be a part of the decision-making team and helping the outsiders gain new skills and insight on how to fix a problem (Erwin 1571). By increasing the number of people from the area of concern allows for people to have a first-person point of view of the problem and understanding of the lives of those involved (Erwin 1571). This makes serving a community much easier because those who are from the area of concern give those who are not informed about how everything works and flows.

Affordable health care should be a human right, no matter race, ethnicity or socioeconomic situation; however, it is should be up to the individual to decide if they want to be insured. For the most part, when compared to their white counterparts, minorities are more likely to be uninsured. Minorities who live in poverty or poverty-stricken circumstances are more likely to be unable to afford health care and have worse health issues than their white counterparts. Public health policy and practice reforms are necessary for our country; thousands of people die because they are not able to pay for different medical services necessary for their survival. Through my personal experience, I can tell that the way our health system is not that great and there must be a change to the way things are done. During my junior year of high school, I had bronchitis, sinusitis and rhinitis – three concurrent respiratory infections; during this time, I had countless CT scans and X-rays of my chest and was on respiratory treatment. Almost none of these medical bills were covered by insurance because the insurance companies ‘deemed these procedures to be unnecessary’; everything had to be paid by my parents and this turned out to be close to five thousand dollars.

Do you believe health should be a ‘luxury’ only the rich can have, or should it be a basic human right? This is a reality in the United States as only the rich are able to afford their medications and visits. An affordable health care program in the country would decrease infant mortality rates, lower the number of children and young adults with chronic health issues, and lower health care costs. 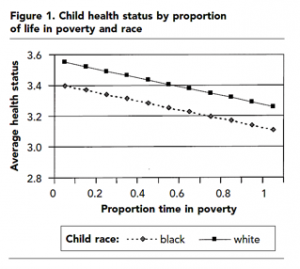 In this figure we see the proportion of a child’s life spent in poverty negatively affects their health status; however, we can see that black children have poorer health than white children (Malat 445). 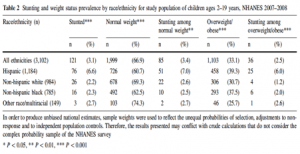 In this table we see the comparison among different racial/ethnic groups of the number of children, between 2-19 years of age, affected by stunting – in their weight – (Iriart 1072).