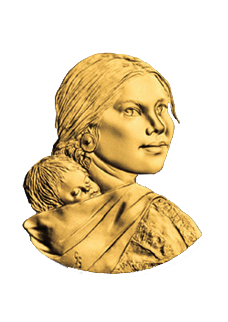 Very little was known about Sacagawea well after the Lewis and Clark Expedition had ended. Her image only started becoming popular after 1902 once the book The Conquest: The True Story of Lewis and Clark was published. It described Sacagawea as a heroine who lead the Lewis and Clark Expedition to success. Sacagawea’s image eventually became a symbol of fortitude and importance for women in American history thanks to women’s rights activists. Many statues, monuments, memorials, schools, community organizations and geographical landmarks have been erected for Sacagawea because of her heroism and contribution to America. 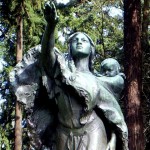 his monument was one of the first of Sacagawea’s many monuments. This particular monument is made of bronze and designed by artist Alice Cooper. It was revealed at the Lewis and Clark exhibition in 1905 in Portland to memorialize the centennial anniversary of the Lewis and Clark Expedition. The funds to build the statue were raised by the National Women’s Suffrage Association. 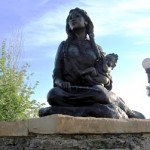 was erected in honor of Sacajawea and is located in the park that is named after her. It’s built in the area where Sacajawea was abducted as a young girl and taken to Mandan lands, named Coming Home. Sculpted by Mary Michael, the plaque reads: “An Indian woman whose heroic courage, steadfast devotion and splendid loyalty in acting as Guide across the Rocky Mountains made it possible for the Lewis and Clark Expedition (1804-1806) to occupy so important a place in the history of this Republic.” 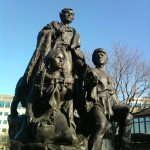 This sculpture was created by Eugene Daub in 2000 as part of the urban renewal of downtown Kansas City, located in Case Park at Clark’s Point. Named The Corps of Discovery, the statue portrays Lewis, Clark, Sacagawea and her infant son, Jean Baptiste, on her back. Across from Sacagawea is York, (an African American slave) who was another part of the infamous expedition. This sculpture is the largest of all of hers, 18 feet in height, built in honor of the Corps of Discovery. 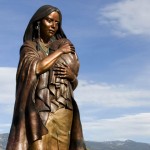 Lemhi Pass is a National Historic Landmark located on the boundary of Montana and Idaho. Managed by the National Forest Service, visitors can hike the Lewis and Clark National Historic Trail. This memorial area was created in 1932 to honor Sacajawea for her success as an important role of the Lewis and Clark Expedition. The Daughters of the American Revolution (a national women’s service organization founded in 1890) helped construct the Sacajawea Memorial area at Lemhi Pass. 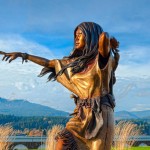 This is a center that is dedicated to providing education and information about the Shoshone heroine and her huge role in the Corps of Discovery. Located where Sacagawea was born in 1788 at the Lemhi River Valley, this center provides an outdoor school of discovery, visitor’s center, an amphitheater, community garden and a research library.

The Corps of Discovery built a fort in the winter of 1805-1806 in Astoria, Oregon to find shelter from the wint 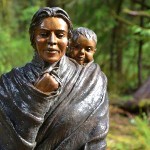 er cold. The expedition stayed there until March of 1806 when they then headed back east.  A replica of this fort was built in the original site in 1955 but was unfortunately destroyed by fire in 2005. It was later rebuilt the following year. The Clatsop National Memorial is part of the Lewis and Clark National Historical Park and managed by the National Park Service. Located outside the visitor center is a life-size bronze statue called Sacagawea and Baby. Jim Demetro was the creator of this statue. 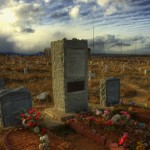 The Wind River Indian Reservation is the supposed burial site of Sacagawea. Her death is inscribed on the gravestone and dated as April 9, 1884. According to oral tradition, a woman named Porivo and only recorded as “Bazil’s mother” is buried on the site. According to stories passed on orally Sacagawea had left her husband Toussaint Charbonneau and fled to Wyoming in the 1860s. 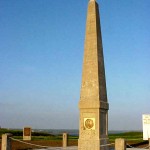 Sacagawea’s death has been a constant controversy even to this date. She is honored by a marker in Mobridge, North Dakota as a member of the Shoshone tribe and for efforts and contribution to the Corps of Discovery expedition. This marker dates her death as December 20, 1812 and states that her body must be buried somewhere near the site of old Fort Manuel located 30 miles north of the marker.