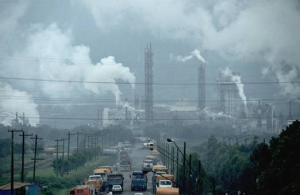 Introduction: A Path to Environmental Decline

For the past couple of decades, China has been facing severe environmental decline that has led them into a position where they have no other choice but to act. For years they have neglected their environment due to their increased focus on building up industry in order to keep their economy growing, but their focus on short-term growth has led them to a path of long-term environmental decline. In the past, economy first and environment last was the way that everything was run. At the time, no one knew of the true harms of having relaxed regulations on industries, such as coal. The coal industry brought them money and energy and ensured jobs for the working class during the growth of industrialization, but what it also brought were heaps of harmful emissions that will remain in the environment for years to come. Coal is widely known as one of the most environmentally damaging forms of energy, so the fact that China had very few regulations on this industry reveals why their environment is in such a state. Although the coal industry greatly impacted the environment in the past, and still does today, it isn’t the only one to blame for their current environmental conditions. Improper farming practices, deforestation, increased use of cars, the disposal of sewage and factory waste into waterways, and overpopulation are all factors that have led China to a future where they must face severe and devastating air and water pollution. In the past, these contributors to environmental decline were not regulated well enough, thus, inevitably leading China down a path where only one choice is left for them: change. Over the years, change has been seen, such as China’s decreasing use of coal as a main source of energy, but when comparing China’s environmental conditions of the past to today’s, it can be said that more regulations need to be made to help bring an end to their environmental crisis.

Air Pollution: Then and Now

In an article written in 2006, called “Surviving an Environmental Crisis: Can China Adapt” by Katherine Morton, Morton says that China’s global carbon emissions, which were 15% at the time, wouldn’t exceed the United States’ until 2025 (63). In two other articles, one from 2007 and the other from 2016, they mention how China has already exceeded the US in their percentage of global carbon emissions. In the article from 2007, called “The Great Leap Backward? The Costs of China’s Environmental Crisis” by Elizabeth C. Economy, Economy mentions how a report from the National Environmental Assessment Agency claimed that China has already succeeded the US as the top contributor to carbon emissions (45). In the article from 2016, called “China’s Environmental Crisis” by Eleanor Albert and Beina Xu, Albert and Xu claimed that China exceeded the US as the largest contributor to global carbon emissions in 2007 and that in 2014 they were responsible for 27% of emissions (para 7). All of this evidence reveals that China’s carbon emissions have greatly increased over the past ten years and that not much has been done to help prevent these emissions from worsening. In the article by Morton, she brings up how a few regulations were put into place to help restrict the percentage of carbon emitted into the air, but lack of support from local governments and lack of authority had deterred these regulations from actually making a difference.

Water Pollution: Then and Now

Water pollution is one of the other main issues that China is still facing. Due to lack of regulations on what industries do with their waste, China’s sources of clean water have become scarce. In the article by Morton, she reports that China’s water supply is labeled as unfit for irrigation and consumption due to the discharge of toxic substances, fertilizer runoffs, and untreated wastewater (65). This report was made back in 2006, but despite having ten years to improve their issues with water pollution, problems have actually worsened. In the 2016 article, Alert and Xu bring up how in 2014, over 60% of water supplies in China’s major cities were categorized as “bad to very bad” (para 12). They also mention how over 25% of major rivers were so polluted that they were labelled “unfit for human contact” (Albert and Xu, para 12). This information reveals how not many regulations were put in place to help prevent water pollution from worsening over the years, but after understanding that inaction would lead to devastating results, such as desertification and increased water shortages, China has pledged to spend 333 billion dollars to help lower water pollution by 2020 (Albert and Xu, para 20). China still has a long way to go, but their increased investment in the fight against their environmental crisis shows how progress can be made.

A Plan for a Cleaner Future

Around ten years ago, China didn’t have much focus on the future of their environment. Due to this, numerous environmental issues arose, such as air and water pollution. At the time, few regulations were put in place, but difficulty came with making sure that they were properly implemented. Only until it became too severe to ignore did officials finally decide that something had to be done in order to prevent their environmental crisis from worsening. In the article by Albert and Xu, they bring up what China is currently trying to do to help improve the crisis they’re in. One of the largest initiatives China took back in 2014 currently requires “15,000 factories and state-owned enterprises to report back on air emissions and water discharges” (Albert and Xu, para 20). This is a huge jump for China and they still have a long way to go, but with large steps being taken, these new plans and regulations will guarantee a cleaner future.