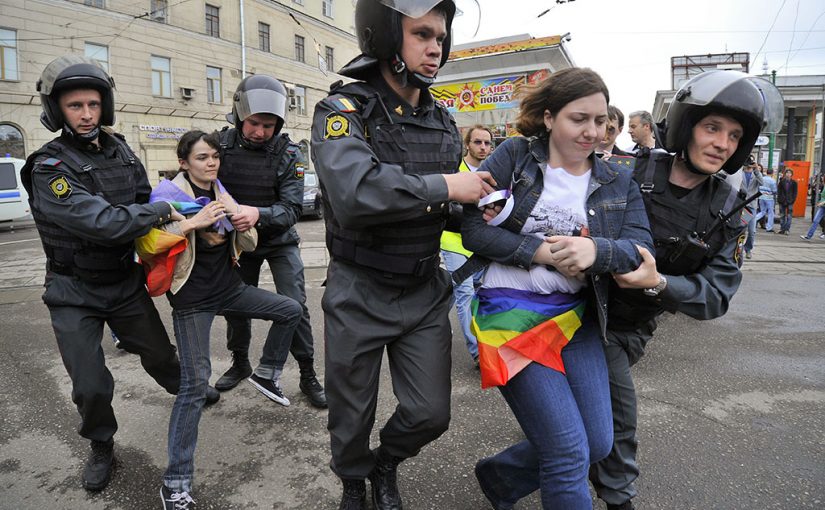 Even though laws have been around for years in Russia that discriminated against the LGBT community, the people of Russia did not show as much hate for them as they do now. For example, there was a guy over in Russia that thought it wouldn’t be a big deal to come out to a couple of drinking buddies of his, after he told them he was beat up by them before having a stone dropped on his head (Khazan). Believe it or not, the people of Russia used to just ignore if people were gay instead of beating them to death because it wasn’t a big deal to them. In an article that is about the history of homosexuality in Russia, the authors write that there was a royal family that had gay members that people did not make a big deal about even though homosexuality was made illegal in 1835 (Quince and Phillips). Homosexuality became legal in 1922 by the Bolshevik, mainly because they wanted to be completely separated from Tsarist Russia, who had ruled previously (Quince and Phillips). Homosexuality became illegal once again though in 1934, when the Joseph Stalin was in power during the time of the Soviet Union (Quince and Phillips). Legalizing homosexuality or making it illegal has gone back and forth over the years in Russia, almost like a roller-coaster ride.  Anyway, the men were thrown into prison for homosexuality while the women were thrown into mental hospitals to see if they could be fixed into liking guys again (Quince and Phillips). The women that could not be fixed in the mental hospitals were basically turned into a man, meaning that they were basically considered transgender and could live life the way that they wanted (Quince and Phillips). Laurie Essig, who is a professor that focuses on sociology and gender studies, says that they would even go as far as give the women surgery to help them look manlier (Quince and Phillips). Surprisingly, Russia did not have a big issue with people that were transgender. Back to the laws dealing with homosexuality, Russia got rid of the law that allowed the arrest of homosexuals completely in 1933 (Rivkin-Fish and Hartblay).

Even though Russia got rid of the law, it did not guarantee that the men who were thrown into prison for homosexuality were released or had charges taken away (Rivkin-Fish and Hartblay). After reading parts and wholes of different articles it can pretty much be inferred that hate started coming towards the LGBT community when Putin started getting in the picture. One would think that since Russians think of sexuality as “fluid”, this was found in a search done by a journalist and a sociologist in the 90s and early 2000s (Rivkin-Fish and Hartblay), that Russians wouldn’t have a problem with the LGBT community.

Olga Khazan wrote an article titled “Why Is Russia So Homophobic?” that basically suggested that the Russian Orthodox and “Putin government” are the reasons why Russia is homophobic. Fairly recently there was a law passed in Russia that banned gay propaganda from being seen by minors in basically any way, shape, or form (Khazan). They have it set up like see no evil, speak no evil, hear no evil with the evil being homosexuality. Khazan suggests that the reason why they passed the propaganda law is because Russians believe that minors can be turned gay. She also writes that this sort of thinking is “not out of place in modern Russia”. The reason why the Russian Orthodox Church has influence, even if it is only a little bit, is because most Russians go to church and support it (Khazan). It does not help that the heads of the church have been known to support Putin and his views (Khazan). It also really does not help that patriarch Kirill has “referred to Putin’s presidency as ‘a miracle’” (Khazan). The head of the Orthodox Church, Kirill, has basically said he was against same-sex relationships (Khazan), so most likely most of the people that are a part of the church have similar views and opinions, or they could be persuaded into it.

Vladimir Putin is most likely the first thing that people think of when they think of Russia, or Trump. Anyway, Putin is seen as a strict and intolerant man. The fact that Putin signed the law that put a ban gay propaganda (Rivkin-Fish and Hartblay) does not help his image, not that he most likely cares. When Putin did this, it happened several months before the Sochi Winter Olympics (Rivkin-Fish and Hartblay) and word had gotten around about the law that he had signed. People around the world wanted to boycott having the Winter Olympics in Russia because they were outraged with Putin and Russia being homophobic (Rivkin-Fish and Hartblay). There was somewhere that quoted Putin, which basically said that Putin wanted the gays to leave the children alone but that they could continue being gay. This just made Putin look even more like a homophobe. The reason why this is even mentioned is because people can kind of get the message that Putin does not want any more of the of Russia’s future generation to be tainted by the gays.

Quince, Annabelle, and Keri Phillips. “The History of Homosexuality in Russia: From Soviet