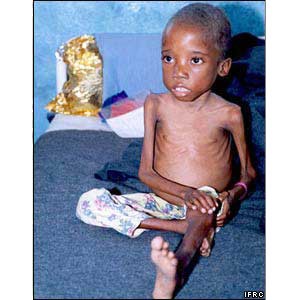 The crisis of malnutrition has evolved to become a major problem in that it greatly affects many people, mainly children, in rural areas of Malawi. There are many factors that contribute to how people obtain reasonable resources that allows them to gain the proper nutrients to live a sustainable life. Although difficult at times, many people have adapted to ways that allows them to provide for their whole family based on what’s available to them. Research studies suggest that education and government interventions are key factors that contribute to child malnutrition in Malawi. Although there are many factors that contribute to the crisis of malnutrition, there are many ways in which people can help to prevent the crisis from getting worse, for example many people living in Malawi are uneducated about the crisis, so therefore by educating people in these areas, it is possible to prevent or even stop the spread of malnutrition.

Malawi is home to many civilians who raise and take care of the people in their household. People in this country use the limited resources available to them by becoming subsistence farmers and fishers which brings in food for their family to eat (Flax 8). One of the main staple crops that subsistence farmers gather is Maize because of its wide variety of uses in the meals of infants and adults (Vaahtera 1). With its many uses, people are very reliant on this crop for all their nutritional meals, but what people don’t realize is the amount of nutrients this crop lacks, like iron, zinc, and vitamin A (Vaahtera 1). The little nutrients provided by this crop leave many children and adults lacking the proper nutrition needed to live a healthy life that promotes proper development.

Many infants are born daily in Malawi and the feeding practices here begin to mold the starting process for the development of malnutrition in children. Very few mothers and caregivers breastfeed their babies as soon as they are born because they fear they will spread diseases, like HIV to their baby (Vaahtera 1). Because of this fear, many infants do not receive the essential nutrients the mother has in her breast milk to properly fight off illnesses and diseases. Some infants who were breastfed did so for a short time before moving on to dry porridges, generally made out of Maize, and then they would begin to eat solid food before age one (Vaahtera 2-3). With this kind of patterned feeding, children begin to develop symptoms associated with malnutrition, like small for size, which can eventually lead to stunting later in the child’s life (Flax 8). This indicator reflects how the lack of nutrients in the diets of infants has a major role in depicting malnutrition that will affect their lives later on because they aren’t receiving the proper nutrients needed for proper growth and development (Flax 1).

With the many signs that some people of an educated background would recognize as symptoms such as stunting and wasting that’s associated with malnutrition, people in Malawi are unable to recognize patterns of growth that are related to malnutrition (Flax 7). Many times children appeared to have symptoms associated with malnutrition, like thinness and edema (swelling), but because of the education that caregivers aren’t receiving, they are unable to recognize these signs that would prompt them to go get help (Flax 2). Because most children in Malawi look alike in regards to body size, it is oftentimes difficult to set apart children who are healthy from children who are malnourished. Often time’s parents look at the fatness of their child compared to the fatness of another child to know if their child is lacking nutrition (Flax 6). Because of the severity of malnutrition in Malawi, it is important to recognize the symptoms and appearances associated with malnutrition because it has a major role in the health of children. For example, children who are small for size at birth were more likely to become stunted later in life, so if mothers are aware of body size, they will be able to know when to start receiving help before the child starts showing any symptoms (Flax 1).

Obtaining resources becomes an obstacle for many because of the limited resources that are readily available to them (Flax 7). People in high income countries rely on imported goods because they are able to afford the food that comes in, unlike people in Malawi that live in poverty, obtaining food can cause a strain on families (Cornia 1). The constant change in food prices because of climate changes makes obtaining food a difficulty (Cornia 2). Oftentimes food that is sold at a higher price is typically when people purchase food because of famine that leaves people without food which leads to an increase in childhood malnutrition (Cornia 9). When prices are low people sell their food because it is during a season when famines didn’t occur, but when people sell their food during this time, they don’t receive their money in full (Cornia 3). With the constant change and struggle for food, it reflects how much the country is in need of government interventions that can help find a way to stabilize food prices so that obtaining food isn’t a major obstacle.

Although it’s difficult to end poverty, it is possible to educate people in Malawi about areas of adjustments that are possible in order to prevent children from experiencing malnutrition. For example, Maize doesn’t contain many of the essential nutrients needed for proper growth, but by offering parents a choice to enroll children into nutritional programs, children will have a chance to receive proper nutrition because of supplements the programs offer (Flax 8). Educating mothers about how to feed and perceive the appearance of their child for symptoms of malnutrition can greatly reduce the numbers of children who are living with malnutrition. Educating people in this country will allow mothers and caregivers to help ease the crisis that is already at hand by providing information that will change the lives of children here for the better.