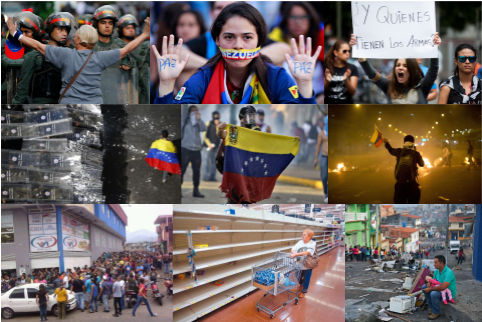 Being a first generation, Venezuelan born immigrant, in my family, our class theme, International Events, is a topic I hold very close to my heart. It’s a subject that describes who I am as a person, it’s where my roots lie, where my life’s very first memories started, and where “foreign” is never a word used to describe me. It’s what brought my family and I here in the first place. But not only should it be important to me, rather it should be important to all generations and all nationalities. It’s through the knowledge of what’s happening outside our borders, that makes us citizens of a much larger community, makes us members of a much larger family, entitling us with the responsibility of  being aware of what’s happening to our neighbors, to our brothers. But with so many issues happening in the world, why not start from la patria– the fatherland. My topic is the political Crisis in Venezuela, and how its people are tired of the government’s authoritarian rule and socialism failure.

Venezuela is a failing country with hyperinflation at its highest, crime rates overtopping its record, starvation affecting the entire population, and political oppression becoming a custom.

Out of 31.1 milion residents in Venezuela, one in three are poor, when statistics gathered by the Ministerio Del Poder Popular de Planificacion show that just twelve months ago the statistic showed it was at one in four. And it’s no wonder since inflation has skyrocketed to a 773% within the past two years. The evidence lies in the average Venezuelan minimum wage, which is 65,000 bolivars (roughly $54) a month. That means the average Venezuelan purchasing one bag of cornmeal, pasta, and milk could take up as much as a one month’s pay, and that’s only if you’re lucky enough to find it in the Supermarkets which force you to wait excruciating hours in countless lines, only on the days the government allows you to go food shopping. Those who can’t find food in their markets are forced to look for it through black-marketeers, bachaqueros, which line up wherever there are subsidised products, and sell it for 10 to 30 times the price they paid. Despite this being illegal, not much effort is being used to stop it in it’s track since it is one of the few growth industries left. According to private sector analysts, “between 2012 and 2015, domestic grain production fell by 80%, meat by 40% and vegetables by 18%“,  contributing to the fact that the average weight loss in Venezuela over the past five months is between 5kg and 15kg, according to the Bengoa Foundation for Food and Nutrition, which estimates that 25% of children are malnourished.

Food isn’t the only thing Venezuela is lacking, the Venezuelan Health Observatory estimates that “fewer than 10% of operating theaters, emergency rooms and intensive care units are fully operational. It says 76% of hospitals suffer from scarcity of medicines, 81% have a lack of surgical materials and 70% complain of intermittent water supply.” Caused by the lack of medicine, Venezuela’s mental hospitals now only care for a small amount of the patients they cared for a few years back. In 2013, there were 23,630 long-term psychiatric patients in public hospitals, but only 5,558 last year, according to a report from the Health Ministry. Tomás Páez, a professor who studies immigration at the Central University of Venezuela, says that as many as 200,000 Venezuelans have left in the past 18 months, driven by how much harder it is to get food, work and medicine. Not to mention crime rates, which in Caracas, the world’s most murderous city, residents are more than 25 times likely to die a violent death than in New York. Crime has worsened alongside the economy. September was the capital’s most violent month in six years with 474 killings, according to the National Forensic Medicine Service.

But how? “How did a country that once represented Latin America’s most powerful petro-economy become a near valueless symbol for one of the most dramatic reverses in a country’s fortunes?” Well, as cleverly put by Matt Obrien, reporter for Independent Magazine, “Venezuela is the answer to what would happen if an economically illiterate drug cartel took over a country”.

Cowardice and Corruption. No other word is needed to sums up Venezuela’s government. It’s divided into 5 branches, Executive, Legislative, Judicial, Electoral, and the ironically named citizen’s branch, “Republican Moral Council”. Four Fifths of the Government- Executive, Judicial, Electoral, and the Moral Council- belong to the late president’s carefully selected cult.  What other cult could I possibly be referring to if not Chavismo. You see, just like any good control gripping (Toro, pg 40), conspiracy making (Toro, pg 40), corruption led (Toro, pg 41), heavily armed (Toro, pg 41), drug cartèling, religious cult, Chavismo, with Hugo Chavez as the Comandante Eterno– Eternal Commander-and the less charismatic Nicolas Maduro as his trusted successor, has made itself central to the lives and identities of its followers and won’t give up its grip easily.

The main reason why a third of the population believes and devotes their lives to the chavista cult is not only because they’re stubborn and beyond reasoning but because they are armed. Conveniently armed by the Comandante, deputized as “defenders of the revolution”, they were successfully trained, Cuban-style, to monitor neighborhoods and do all the dirty work against whomever threatens to question their cult like ways through harassment, and strategic arrests. Aside from the less identifiable militia, for much of Venezuela’s history, the National Military also has a playing role in the ruling of Venezuela. As expected, it’s as corrupt as the Executive branch that leads it. The late President involved the Military in narco-trafficking through their warm relationship with the Revolutionary Armed Forces of Colombia, La FARC, creating the  Cartel de los Soles. As a result what’s left is a kleptocracy– a government in which those in power exploit national resources and steal. Today, despite the fact that soldiers are not trained to understand the global supply chain, the Armed Forces are in charge of the new food supply that comes into the country, so besides corrupt, they’re also the reason for malnutrition.  But ordinary soldiers, however, are suffering from the same food shortages, and are forced to sell food and medicine as part of the black market, which creates the argument that there’s a possibility they may grow tired, lose respect for their beloved Comandante Eterno, and start a coup against the government to free Venezuela from its grip.

But what of the remaining one fourth of the government? That, ladies and gentlemen, is where Cowardice comes in. The Legislative branch, which was at first seen as a success to  the People of Venezuela, despite Maduro’s clever yet desperate attempts to stall by  skewing polls, jailing electoral opponents, dominating the media, and tampering with ballots, is now a spineless, easily damaged, ineffectual group that has had little to no contribution to promote  positive change. You see, the National Assembly, legislative branch, was Chavista dominated once as well, until 2015 when Maduro was obligated, by the constitution, to hold elections. The people of Venezuela saw this as their rescuing opportunity, and voted for the opposition party to take up most of the seats in parliament. The victory was astonishing, 112 seats were won by Opposition candidates. But as of December of last year, nothing has been done. Since they are only one-fifth of the government, and the rest is regime-dominated, it’s nearly impossible for them to act. Though they have had the small opportunities to act, they’ve lacked the character to stand up to Maduro’s constant bullying.

This is what’s happening in Venezuela. This is the real crisis affecting everyone, rich, poor, black, white, woman, man. Yet despite US attempts to provide help, Maduro and the chavistas are not allowing any of it. Just like all good cults that hold an insane religious argument, Chavismo’s only explanation for all the inflation and starvation of its people is blamed on the so called plot undergone by America, strategically named la guerra economica (Toro pg 40)-economic war, “where all bad things that happen must, by definition, be the fault of evil conspirators” (Toro, pg 40), and no actual evidence to support the accusations.

The solution is still to be found, some argue that the solution to the political crisis lies in the hands of the new legislative government of Venezuela, and the international Community, specifically under the leadership of the United States (Farnsworth, pg 56-57). Others argue that although increasing imports and exports to and from Venezuela could widen the gap between the adjustments and imports under carried by the government, it’s a starting point, that should be followed by good communication and a strategical plan(Toro pg 42). “UN High Commissioner for Human Rights, Zeid Ra’ad Al Hussein, urges both the Venezuelan government and opposition parties to persist with recent and to the date unsuccessful attempts at dialogue, highlighting that the answers to the country’s problems must come from Venezuelans and must not be imposed from outside”

What do you think is the solution to the crisis? 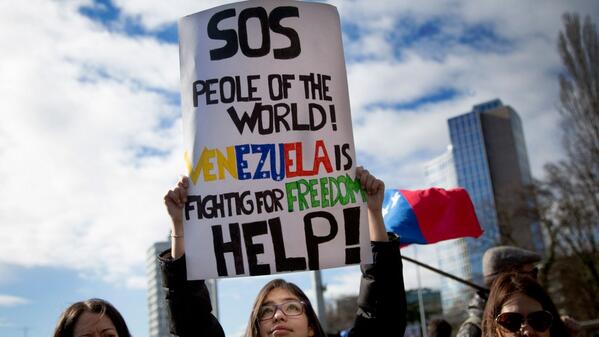