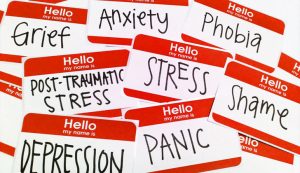 Personally, I know what it feels like to lead a life with a mental illness and the damage that can be done when it is ignored and when it is not given priority. Growing up in a very dysfunctional household, I was set up to encounter some sort of issue whether it be emotional or mental and during my sophomore and junior year in high school, that’s exactly what happened. I fell into the darkest void I could have ever imagined as depression took over my life and my motivation for those two years. I remember hearing my father tell me that it wasn’t depression, and the feeling of him trying to silence me and sweep it under the rug did not sit right with me. It was like a scream trying to make it’s way out of a sewn mouth and knowing that his reluctance to accept what his son was going through was nothing more than his perpetuation of stigmas within his own culture. With experiencing that, I started to wonder: In what ways are mental health issues prevalent elsewhere in the world and in what ways are those people directly or indirectly silenced like I was?

Through research, I found out that mental health was a serious issue within developing countries such as Africa, but specifically, Zimbabwe. It became even more interesting when I kept running into information that suggested a deep correlation between mental health and PLWH (people living with HIV). After taking note of that and more research, it brought me to make one point: The prevalence of mental health disorders within PLWH in developing countries come from two reasons: lack of advocacy and lack of substantial resources.

Before I explain why these medical issues are as prevalent, you might be wondering how the two correlate specifically. According to one study’s literature review “A recent study found that of 395 patients screening positive for a mental health problem, nearly 50% were also accessing services for an HIV-related issue (JANAC).” This statistic clearly shows that many people who suffer from a mental illness, are also conflicted with HIV. With knowing this, the question becomes: Why? According to the same literature review in that study “Alcohol and substance use is on the increase, which may indicate it being used as a coping mechanism to deal with stress surrounding an HIV diagnosis” (JANAC). So what this is saying is that being diagnosed with HIV and living with the stigmas surrounding it can lead a person into a state of stress which is a building block for the start of many mental illnesses. One of those mental illnesses being depression as that is the most prevalent mental health disorder seen throughout disability-adjusted life years, specifically 50 percent. Vice versa, “High rates of alcohol use, depression, and anxiety in PLWH are known to influence self-care and risk-taking behaviors, exacerbating the risk of contracting other sexually transmitted infections (JANAC).” The statistics clearly shows that both can cause the other.

Now that we understand the correlation, we have to understand why they are both such an issue in Zimbabwe’s society. Lack of advocacy is the first limitation to fixing or progressively reducing the prevalence of both issues. To get a sense of this, I read this study titled “We Are Not Really Marketing Mental Health: Mental Health Advocacy in Zimbabwe”. Within this study, they interviewed key players within the issue of mental health. They interviewed Physicians, Psychiatrist, Researchers, Nurses, and Policymakers to name a few. However, they did not choose to interview those seeking the services (the afflicted) because they felt that there would be bias present in their responses. They were asked questions around advocacy of mental health. One response said “I think the major barrier of the major problem is that people are ignorant about what psychology is and how important it is. But the moment you explain to people, people appreciate, even if they are not trained in psychiatric. They appreciate the importance of it.” This statement came from a physician and multiple professionals in the medical field endorsed this statement and form of thinking. This centered around the topic of community awareness of psychology and that is key in accepting and dealing with both issues. Another physician stated “To me that is the biggest challenge, we need to change our orientation towards health. We need to embrace the World Health Organization’s definition of health. That is not just physical but there is mental and emotional component and the spiritual component. This is just a glance at the viewpoints of these participants but to get to the point, it’s a very repetitive viewpoint from everyone else. According to the discussion section, there was a broad viewpoint among the participants that mental health was “widely misunderstood and under-appreciated” in Zimbabwe. However, two-thirds of them spoke with depth regarding advocacy and made it known that advocating strategically was something they believed heavily in but as we know from this study, it isn’t. Therefore, to start to progress in understanding mental health and just how important it is, we have to speak about it. If there is no one advocating for it, then it will remain “widely misunderstood and under-represented”.

However, the lack of advocacy is not the only barrier in the way of fixing this issue for them. Aside from lack of advocacy, these developing countries lack the substantial resources to effectively do anything about it. According to the JANAC, “among 58 low- and middle-income countries, 67% experience a shortage of psychiatrists, 95% experience a shortage of mental health nurses, and 79% experience a shortage of psychosocial services.” This statistic alone that a general consensus of developing countries do not have the resources to tackle mental health and as I stated before, mental health and HIV are implicative of each other and so if one issue is not fixed, then it’s just time before the other one appears. However, my study was on Zimbabwe so you guys are wondering if it applies there. In fact, it does. According to JANAC, “Findings in Zimbabwe are similar, as 50% of mental health professional positions are vacant and 90% of all psychiatric nurses work in one hospital in the capital city of Harare.” The lack of distribution of the very limited mental health professionals they have becomes a huge issue because not everyone in this country has the means to reach these places. If we can distribute these services equally around these countries and increase the people we have to begin with in these fields, then that can do a ton for fixing the substantial resource gap.

In conclusion, no issue is easy to solve but even the smallest things mean something. If you choose to read this and understand this, then know that advocacy and equal distribution of resources can be incredibly useful for helping the situation of mental health in countries like Zimbabwe. We can’t complain about an issue’s scale when we don’t speak up or provide what is needed to fix them.