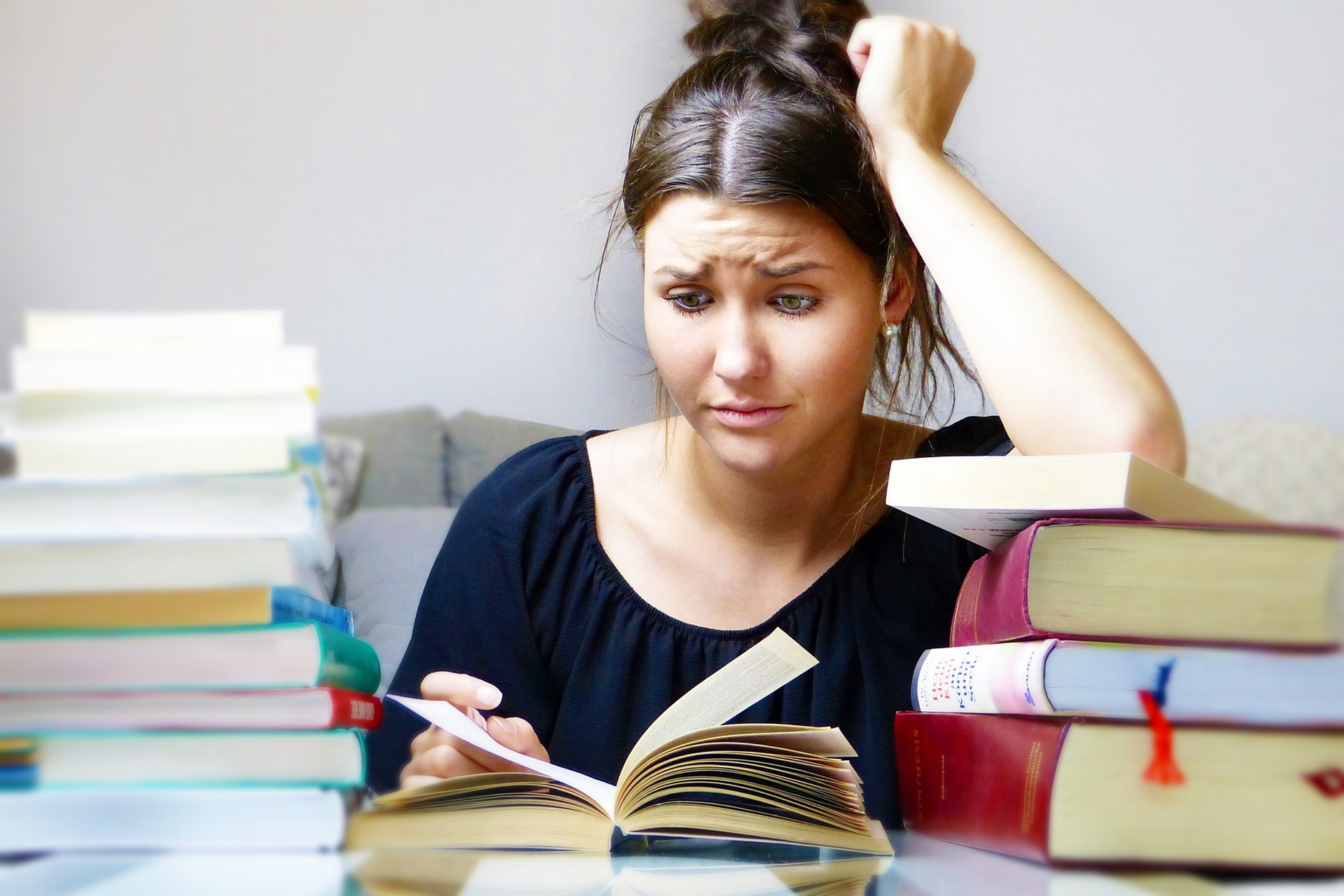 Children are placed in a classroom before losing their first tooth. Most people are in classrooms for almost fifteen years of their lives. So many firsts occur inside a classroom. There are many variables that may inhibit the success and the failures of a student in a classroom. Whether it be the teaching style, classroom setup, to even the color of the classroom. University students are well acquainted with what styles work best for them hence the infamous rate my professor website, where students rate professors depending on styles of teaching. This subject is so important as schools are slowly going through a revamping period; a new beginning where teachers have a lot more control over their classroom than ever before. Students care now about the small things that can help further their future.

Participation:
Participation is often a grade percentage. It increases by the year, by senior year of university some classes even equate it to 50% of your overall grade. This need to have everyone talk in a classroom of fifty to a hundred students is terrifying for many who suffer from social anxiety. Naomi Simatos, a George Mason Senior, said that her best experience in a class was in “International affairs 200, auditorium, More interested in what the class was about also never had to be in front of the class alone always was divided into groups. And the professor was amazing very understanding and he would always pair someone shy with someone that’s very outspoken.” Not everyone has the ability to speak naturally, we all grew up under different situations. If participation is a mandatory part of the class then it is the professor’s duty to make sure to pair correctly.

One of the biggest changes between high school and the university is the number of people you know in a class, it goes from everyone to no one. The fear of being alone and public speaking is really common especially amongst freshmen in universities. Some classes in George Mason have 500 students. Marymount University Junior Ahmad Abumraighi said, “it’s hard to fit in with privileged students who feel entitled to things. I feel that I have to work extra hard to prove myself.” Private schools such as Marymount although give that one on one experience, claim to be diverse, and immigrant-friendly often feels the opposite. Immigrants come into this country without knowing who they are in class with but also not knowing the language. During that process of learning a whole new culture, it’s hard for the ESL students to participate in classroom discussion. This leads them to work twice as hard to accommodate to the standards that the professor has on the class as a whole. Also, heightens immigrant student-classroom anxiety as the fear of people making fun of their accent is pronounced.

Hamza Abusharakh said, “One of my classes at NOVA, it was a business course. The style was traditional and had four of my friends in the same rectangular table. The professor was extremely relaxed which made everyone including myself comfortable. This experience was different because of my group of friends and teacher’s laid back behavior.” Knowing people or having an inclusive teacher in class can decrease classroom anxiety or to some students have no result. Frederick Thomas, a George Mason Senior, said, “My favorite classroom experience was a lecture hall with capacity for 75 people. The professor mainly lectures in an interesting matter and allows participation by using volunteers to help demonstrate his concept. If no volunteer gets up he doesn’t call anyone else but finds another interactive way to get his point across. This was by far my best experience.”

The pressure to be picked on and being asked questions on the spot questions is so strong that even a straight A-plus student may forget the answers that are presented to them. Safa Hawash, a George Mason freshman, brings up an important point, “I have experienced it once during a very long art class where I felt like I wasn’t being properly represented.” It’s hard to participate in a classroom where you are the only one. The only Muslim, Hispanic, African, Asian, the only one that shares your phenotype. The exterior image sometimes embodies the internal when looking at someone else who looks at you share a bond of the struggle that you both have gone through. Not having a balanced representation is really bad for classroom anxiety.

Grades are a huge motivator for classroom anxiety students like George Mason Junior Maleeha Darab who said, “I usually become anxious when I’m about to give a presentation or ask a question in class.” Presentations are often a big classroom anxiety motivator as it is when all the students are tested essentially in front of other students. Most students who have stage fright or fear of public speaking often remember their first experiences. Sometimes people’s fear of public speaking often even trumps fear of death, which is why although presentations bring about anxiety it is important for the real world.

Abusharakh said, “I get an upset stomach on exam days. In also experience unrest when beginning a new class due to unpredictable factors such as professor behavior. Sometimes classroom thoughts haunt me throughout the day and even week which causes stress.” The grading style of a professor is important. Is the professor forgiving? Does he/she offer redemption options? Extra credit? Students have an increase in classroom anxiety when not knowing if they have a shot of passing the course as a whole.

Consistently, students said that the number of students in the classroom affected their learning experience. George Mason Junior Iman Said stated that “In CST 110, freshman year of college. The amount of conversation and subject required for this class allowed my classmates and me to unpeel more and more layers of one another, making us all the most sincere of friends by the end of the semester.” The smaller the classroom size the greater the opportunity for everyone to feel comfortable enough to share whatever it is that they are going through and increase participation. Elham Abdurahman, a George Mason Senior, said,

“When I have a small circle it makes it better than a bigger classroom.”

At Marymount average class sizes are small in comparison to other public universities. Imagine having to distinguish yourself out of a four hundred student classroom and having to deal with TAs instead of professors. Nour Hawash, a senior at George Mason, said that “A small number of students in the class along with discussions where everyone participates is nice.” In some cases having participation as the bulk of the grade makes sense as the style of the room and the conversations are allowing a natural conversation.

Classroom Styles:
The classroom styles also have an effect on classroom anxiety in the survey I sent to eleven people. Here are the results: 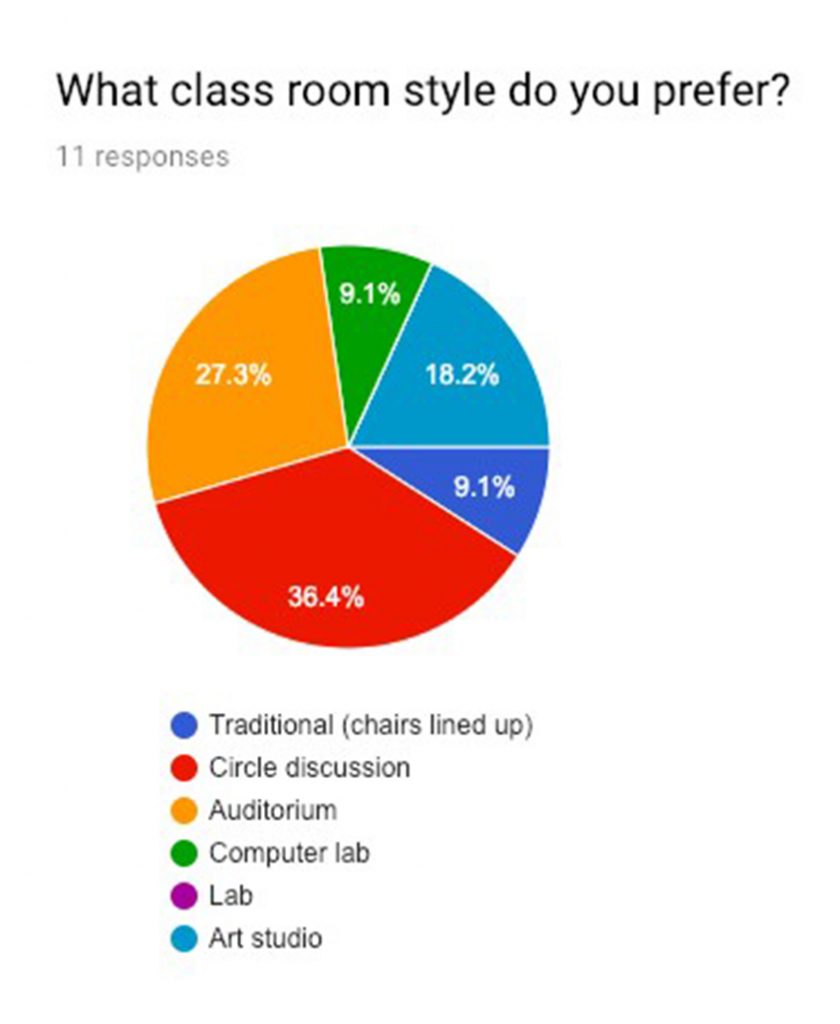 From these results, we can see that there is a range of different styles preferred. There are many different students’ opinions and that is expected. The highest percentage is discussion styles classroom. Within this survey, there was no one who votes for the lab but there were students who prefer traditional. Students like Mason University Freshman Safa Hawash say, “Classroom anxiety doesn’t necessarily have to do with the physicality of the room itself. It’s about the topic being discussed, the people, the vibes of the class itself.” To some students, the aesthetic of the space isn’t as important as the people in it themselves. Maleeha Darab states, “My favorite classroom experience was in an art class. We were able to sit on the floor if we wanted. It was a color space and it had multiple different seating options like bean bags, stools, chairs, etc. I liked the choices that it offered as well as the color and relaxed environment it had.” Imagine a class where chairs were optional. In certain cultures sitting on the floor is the only way to do it. Art classes often break the barrier when it comes to creativity.

Classroom colors are evolving over the years. Remember elementary school when the class was filled with posters fun colors inspirational quote kind of like the original Instagram on the wall. The room itself told the students what subject was being taught. As we get older less and less effort was put into the classroom space.

Iman Said said, “White is the worst, the warmer the colors the better for me. Also, this may be weird but the room has a cozier feel when the room is carpeted versus tile floors,”

Maleeha Darab said, “I’m tired of seeing navy blue chairs. I would like to see more color in the classroom. The best colors to me are light colors (maybe pastel) of blue and green and yellow. Worst colors are white (they make me feel uncreative and unimaginative).”
Fedrick Thomas said, “Calming colors are best, school is stressful as it is!”

Colors give humans an emotional response. There are colors that are more calming such as green and yellow. Some colors enrage such as red. The colors that are traditional in classrooms are white and grey. As a person who goes into Juvenile detention centers weekly to mentor, I can’t help but see the correlation between classroom and jail cells. The walls are often grey or white. Aesthetic now more than ever affects students here in the millennial Instagram worthy era. Classroom styles have evolved and are evolving to becoming more and more inclusive and that is a step in the right direction.

The classroom space is overwhelmingly important to students. Studies say that color affects mood as a whole. The classroom is a space where everyone should be represented.

Marymount student Ahmad Abumraighi made an important remark: “Instructors need to be trained on how to break the ice and narrow the gaps between students by showing them that they are all equal to having access to the opportunity.” We have all been in different classrooms across our fifteen-year classroom issues and it is important to have an inclusive classroom and that begins with the person at the top, in this case, it would be the professor or teacher. From ESL classes to IB courses, to university this diversity and inclusion is often a myth.