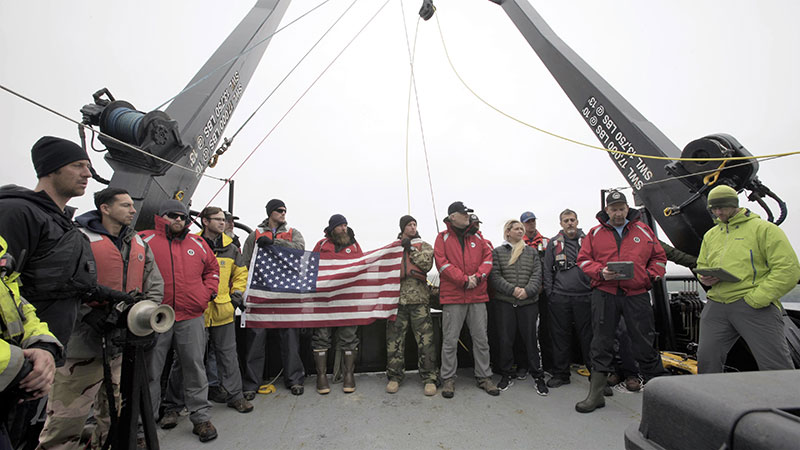 Dr. Eric Terrill has 25 years of experience in basic and applied research programs. In 2003, he established a laboratory to conduct explorations and research. Dr. Terrill focuses on research enterprise, data analysts, and connected that with ocean scientists. Dr. Terrill has a degree in Applied Mechanics and Engineering Sciences, a Ph.D. in Physical Oceanography-Applied Ocean Science. He is co-founder of the Project Recover, which conducts global searches using unmanned underwater vehicles to locate WWII-era aircraft crash sites.

Andrew Pietruska specializes in search, documentation, and recovery of services members who have gone missing in action because of conflicts. He has a degree in Underwater Archaeology/Maritime Studies and a Ph.D. in Anthropology. He has more than 15 years of experience conducting research underwater. He also works with Project Recovery as a forensic/archaeological expert.

Dr. Mark Moline is the Director of the School of Marine Science and Policy at the University of Deleware. He is also one of the founders of Project Recovery. Dr. Moline has a degree from St. Olaf College and a Ph.D. from the University of California. He has over 20 years of experience and over 900 recoveries all around the world. He has written over 150 articles including topics such as biology, underwater robotics, and autonomy.

Matt Breece has a Ph.D. in Oceanography from the University of Deleware and a master’s degree in Natural Resources from Deleware State University. Before becoming a Project Scientist for Project Recovery, he was remote sensing and forecasting for the Atlantic Sturgeon.

Colin has a master’s degree in War and Society and has almost completed his Ph.D. at the University of Southern Mississippi. Colin is a historian, with a focus on War and Society. He specializes in the recovery and search of those Americans who are missing in action because of past conflicts. He is the lead historians for Project Recovery, not only does he coordinate with historical operations, but he is in charge of data management, case analysis, and field investigations.

Eric Gallimore’s work focuses on unmanned underwater vehicles, he is a Ph.D. candidate in Applied Ocean Sciences. He is in the process of developing a magnetic sensor system that would be used to find and map undersea debris. In 2015 and 2016 he was the chief scientist for the Scripps Institute of Oceanography for two expeditions.

Robert has two degrees from Dickinson College and Southern New Hampshire University in Electrical Engineering and Robotics and Artificial Intelligence. Robert is an experienced underwater robotics engineer, he has worked for Rutgers, Hydriod, and Scripps Institution of Oceanography.

Edward is an experienced boat driver as well as field preparation management. He is a marine technician who specializes in deployment from small boats. He is a degree in environmental studies and planning from Sonoma State University.

Brian has built software for Project Recovery. He is a programer for the Scripp Institution of Oceanography. He graduated from the University of California. His main job is to provide data management and delivery. The web software Brian built has aided the missions of Project Recovery.

Kyle has worked with BBC, Discovery Channel,  and Passion Pictures. He is a filmmakers, and expedition leader. He is a co-owner of the SD expedition which is a company that specializes in wildlife experiences.

Andrew is a part of the engineering team and he works on design modifications, maintenance, as well as field operations. He is experienced in working with sides that can sonar, multibeam sonar, and scientific diving. He has two degrees from Brown University in Geophysics and Engineering.

Erik White is a senior project engineer who focuses on AUV operations and support. He spent 9 years in the Navy where he worked as a Rescue Swimmer and Electronic Warfar Technician. After his service in the army, he began field service and engineering for AUV. He has worked for Remus AUV for over 10 years. He has also worked for the Naval Special Operations Group.